Cool it down: The making of a climate-ready campus 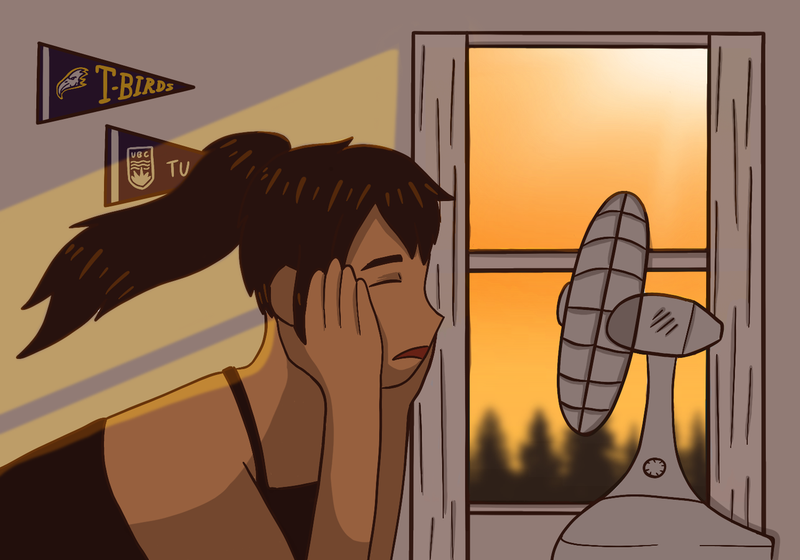 “UBC as an institution can be a leader in good building design for the climate future.” Kylla Castillo

After a record-setting heat wave in June left many at UBC sweating it out, experts warn that the climate crisis will only make things worse

During the heat wave, campus temperatures peaked at 36.6ºC while the national record was broken in Lytton, BC at 49.6ºC. Shortly thereafter, a study concluded that heat waves were 150 times more likely due to the 1.2ºC average global temperature increase since pre-industrial times, with the authors claiming that the temperature spike was “virtually impossible without human-caused climate change.” The Ubyssey sat down with experts at UBC to learn more about how the university and its students can be ready for future ‘hot grad summers.’

In an interview with The Ubyssey, Michael Brauer, professor in the School of Population and Public Health, said that one of the most immediate health impacts of extreme heat is dehydration. The worsening of certain health issues, like chronic kidney disease and stroke, have also been linked to extreme heat.

However, it is the older demographic that we need to worry about more. “So for UBC, that may be sort of less important in terms of students, but certainly staff and faculty,” he said.

The heat did prove to be deadly for older groups — most of the heat wave-related deaths from June 20 to July 29 were people over the age of 60.

Brauer emphasized the role students can play in supporting those at-risk.

“There’s something perhaps UBC students could do in terms of mobilizing in the broader community — checking in on especially older people, people living alone, people with mental illnesses that are alone, out in the community.”

But the risk of a heat wave is not limited to our biology. Brauer also highlighted that heat can increase the risk of death from other heat-stricken individuals due to “things like motor vehicle collisions, suicides [and] homicides.”

“We see these sorts of behavioral impacts, when we look at all the data we see increases in deaths from those causes as well,” he said.

There is one Nature study backing the “behavioural impacts” that Brauer described. According to the study, the rate of violent crime in Finland increased by 1.7 per cent for every degree increase in average temperature.

As the heat creates some detrimental impacts, building infrastructure can play a role in reducing some of the risks.

In an interview with The Ubyssey, Sarah Henderson, scientific director in environmental health services at the BC Centre for Disease Control and associate professor in the UBC School of Population and Public Health, emphasized that “air conditioning is sort of the number one protective factor” in minimizing exposure to heat.

“When you have a big institution like UBC, one of the best things they can do is provide those safer, cooler spaces for people,” she said. “We’re facing a climate scenario now where we need to be very careful about building buildings so that they can stay as passively cool as possible.”

However, Henderson cautioned that air conditioning uses a significant amount of energy. One study suggested that heating, ventilation and air conditioning represent nearly half of the energy used in buildings. What’s more, hydrofluorocarbons — a type of refrigerant used in many air conditioning units — are a type of “super greenhouse gas,” having a global warming potential far greater than carbon dioxide per mass unit.

On the alternatives to air conditioning, Henderson explained that in Canada, it’s best to employ technology that can serve our needs year-round.

“In Canada, where we have potentially severe winters and potentially hot summers, you need the built environment to serve all of those purposes,” she said.

Along with heat waves, the climate crisis is projected to increase the intensity of wildfires. Historically, wildfire smoke has impacted the UBC campus, bringing its share of health implications.

“Wildfire smoke, we know very clearly, will lead to increased severity of symptoms for people that have respiratory disease, so asthma and [COPD],” said Brauer.

However, he said that little is known on the long-term effects of wildfire exposure and “that’s really the question that we’re grappling with right now.”

Referring to a 2014 study based on Russian data, Brauer said that “there appears to be sort of an interaction” between the health effects of smoke and heat and that dual exposure “led to more severe impacts than one or the other.”

On protecting members of the community from the smoke and the heat, Brauer highlighted the importance of long-term planning and the creation of clean air and cooling areas.

“UBC is actually quite well set up to do that, because we have a lot of buildings that are mechanically ventilated [and] are able to handle large numbers of people,” he said.

In June, UBC set up multiple air-conditioned cooling centres on campus following calls for such centres by students.

Henderson echoed Brauer’s sentiment, noting that the creation of these cooler spaces is an essential step in building a campus more resilient to the change crisis so that “UBC as an institution can be a leader in good building design for the climate future.”

In light of the climate crises, UBC has released its “climate ready requirements” — a set of infrastructure practices that the university aims to implement. “Thermal comfort” is one of the prescribed goals of the project, with passive cooling measures being prioritized and active cooling practices being used “if needed to reach performance requirements.”

Some of the passive cooling strategies that it lists include applying high-efficiency lights and equipment, outdoor shading, a “climate responsive landscape design” to reduce the heat transferred to buildings and a more favourable building-to-wall ratio.

In tackling the public health threat of the climate crisis, Henderson acknowledged the value of having individual students do their part, drawing parallels to the COVID-19 pandemic.

“One of the things I’ve been thinking about recently is … throughout [COVID-19], we’ve just had these posters up everywhere, telling people to wash your hands and maintain your distance,” she said.

“Maybe when we have [extreme weather] events like this, we need to put posters up reminding people to wet down your T-shirt if you’re too hot or take a cold shower, or those other kinds of ways to protect yourself from a public health threat.”