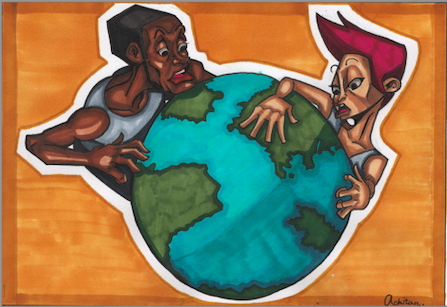 You can't argue with science, right? Turns out, a lot of people do. Andra Chitan

Discussions around the climate crisis can turn into heated debates, making accurate information essential — along with the skills to communicate it.

Though the climate crisis has become an issue of great political, social and environmental relevance, research about climate science can be difficult to understand. The Ubyssey sat down with Yu Luo, a PhD candidate in cognitive science, and Fernanda Tomaselli, a lecturer in the department of forest resources management, to talk about the best strategies for effective evidence-based climate change communications.

You can’t argue with science, right? Turns out, a lot of people do — though the academic community is in consensus that human activities have contributed to the climate crisis, 36 per cent of Canadians disagree, according to Canadian Climate Opinion Maps 2018.

Scientific data, especially when presented alongside dense scientific jargon, can be challenging to understand. This is why Tomaselli encourages using “the power of stories, like storytelling and narrative.”

“We are hearing a lot more about developing this appealing story that can connect to people rather than just giving people the scientific facts like carbon concentrations,” she said. “That’s extremely abstract for most people.”

In a 2014 article from the Proceedings of the National Academy of Sciences of the United States, Dr. Michael F. Dahlstrom found that using narrative to communicate scientific concepts increased the general audience’s understanding, interest and engagement with the subject matter. He also argued that storytelling is intrinsically more persuasive, which offers science communicators another tactic to make information more accessible to doubtful audiences.

Luo and Tomaselli both commented on the appeal to emotion during conversations surrounding the climate crisis.

A 2017 article published in Nature Climate Change argued that appeals to emotion in climate discourse tends to oversimplify how our brains and behaviours interact with our emotions.

The authors stress that emotional targeting is not a “magic bullet” that can be used to initiate a certain reaction from an audience — it represents one layer of what should be a multidimensional communication strategy. Emotions are complex as they are shaped by the context in which they are felt, as well as other factors. What’s more, little is known about their long-term impact on behaviours relevant to climate action over time. Certain emotions may also trigger unique behavioural outcomes from different people. For example, fear may be motivating for some and demotivating to others.

Both Tomaselli and Luo stressed the importance of tailoring climate communications to specific audiences.

She highlighted message framing — the process of modifying how you present information according to your audience — as a communication strategy to more efficiently convey messaging about the importance of climate action.

She explained, for example, if addressing an audience who prioritize public health and the economy, it may be more effective to frame climate change initiatives in terms of their benefits to these sectors — or the potential detriment should action not be taken — as opposed to the emphasis being placed on the environment.

A 2017 research article supports Tomaselli’s recommendation. Its authors found that conservative audiences were more receptive when free-market — an economic system in which the prices of goods and services are regulated and negotiated by buyers and sellers with little to no government interference — solutions to climate change were emphasized.

Luo, alongside associate professor in psychology Dr. Jiaying Zhao, reported in a recent review that “people tend to pay attention to information consistent with their pre-existing beliefs, motivations, and values.”

In their 2019 research study, Luo and Zhao found that liberal audiences were more likely to make donations and sign petitions when the rising part of a global temperature graph — the part of the plot most consistent with their socio-political motivations or biases — was highlighted.

In contrast, people with conservative views were less willing to engage when focused on the rising part of the temperature plot — theoretically, because it counters their biases. Thus, conservatives were more likely to make donations when the flat part of the graph was emphasized. They concluded that focusing on information that is consistent with one’s socio-political motivations may be more effective at encouraging climate action. 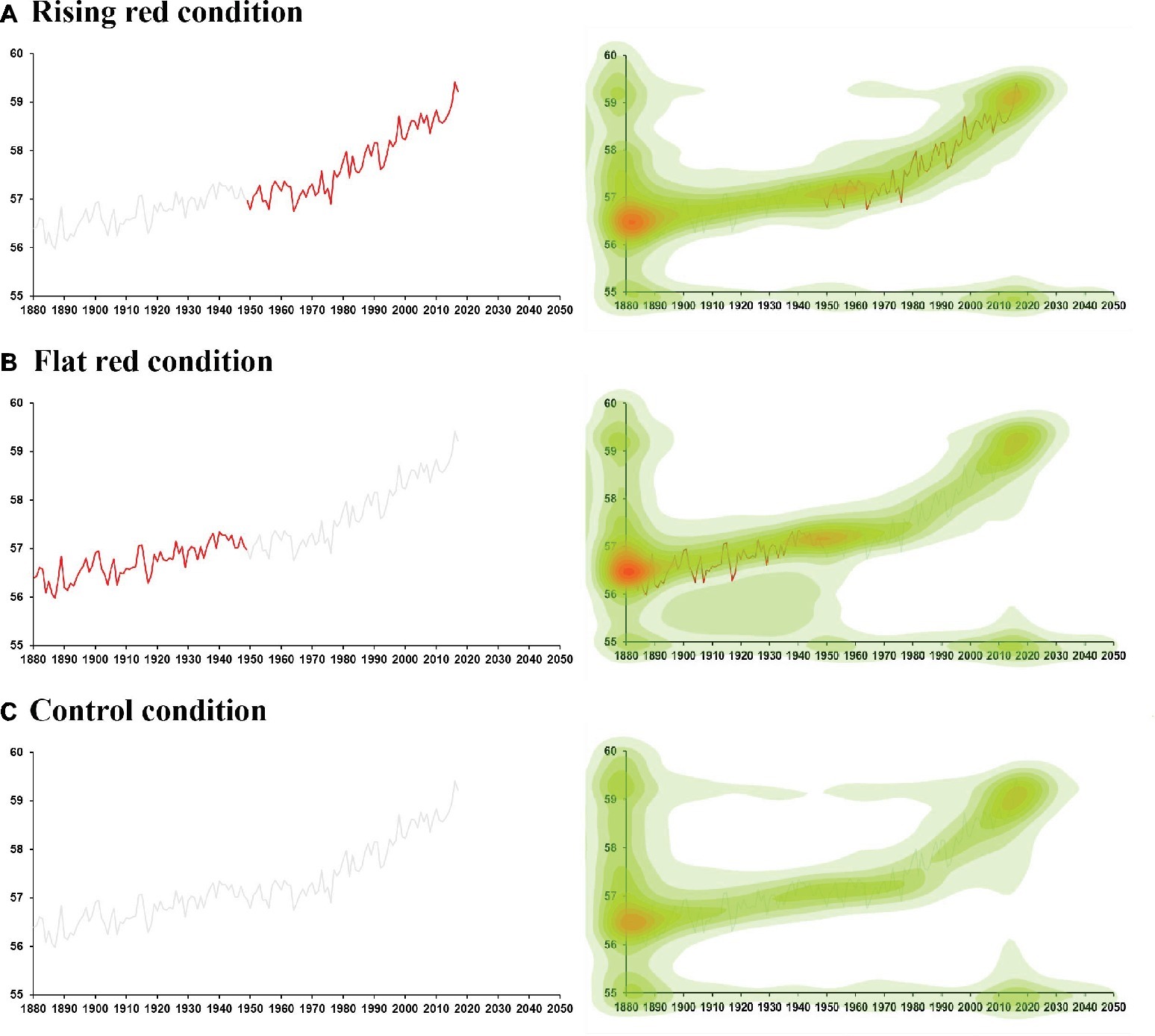 A image of the plots shown to conservative and liberal audiences. (A) represents the rising condition, while (B) shows the flat condition. (C) is the control group. Adapted from Luo and Zhao (2019)

Another strategy, suggested by Tomaselli, was the emphasis of equal, if not greater, consideration on the impacts of the climate crisis in local environments and present times.

“[Climate communicators] have tended to frame climate change as something distant, something that will affect polar bears far away from us ... So these images really do not connect with most people,” she said. “Making it relevant to people’s own [lives] and their community … is something much more effective.”

A 2021 Frontiers article echoed Tomaselli’s message — it found that individuals were more likely to take action against climate change when they were directly affected by climate disasters. Even the framing of climate discourses relative to the past or the future can have an effect on how well it is received depending on the political affiliations of the audience.

Luo and Tomaselli agreed that one way to combat misinformation about climate change is to have trusted authority figures deliver information. Luo explained that, for example, having a conservative representative accurately explain climate research may make conservatives more willing to accept it.

Luo also generally recommended presenting people with the correct scientific information. Tomaselli addressed the limitations to this approach, highlighting that many research papers on climate research can be difficult to understand for non-experts.

Although she agreed with the idea of improving “climate literacy” among the general public, she encouraged other members of the academic community to make their research easier to understand.

Tomaselli noted progress is being made, citing the use of easy-to-understand visuals in the Intergovernmental Panel on Climate Change’s (IPPC) sixth climate change report as an example. The IPCC has also published a handbook describing effective strategies for climate change communication.

“I think that we are on the right track, for sure. It has improved. But of course, there’s still a long way to go,” she said.

Tomaselli and Luo both gave examples demonstrating the effectiveness of simple visualizations to improve public understanding of climate research. They explained that simpler visuals that don’t require much cognitive effort to understand, such as infographics and icons, can be a useful tool for communicating to non-experts.

“We live in a time where people are bombarded all the time with social media, different messages, different news and most people have actually very little time,” she said. “So developing simple messages that are very easy to understand ... is also effective.”

As an example of effective simple visuals, Luo referred to UBC Vancouver’s Climate-Friendly Food System Label initiative where he acts as a co-investigator. In this project, they use a colour-coded system to represent the amount of greenhouse gas emissions that were produced to make campus meals. In this system, green labels are the most climate-friendly option, yellow is a somewhat climate-friendly option and red is the least. This system has been implemented at Mercante.

Tomaselli mentioned a study co-authored by department of forest resources management Professor Stephan Sheppard which demonstrated that after engaging with an interactive education game featuring 3D visualizations and simulations of what the future could look like with climate change, participants were more willing to indicate support for local climate action.

Both of these studies showcased how effective visualization strategies can be in making climate research feel more concrete, a goal that Tomaselli emphasized.

“For many people, climate change is still a little bit abstract, a little bit something of the future. So these visualizations help us to bring that abstract reality to a more concrete experience,” she said.