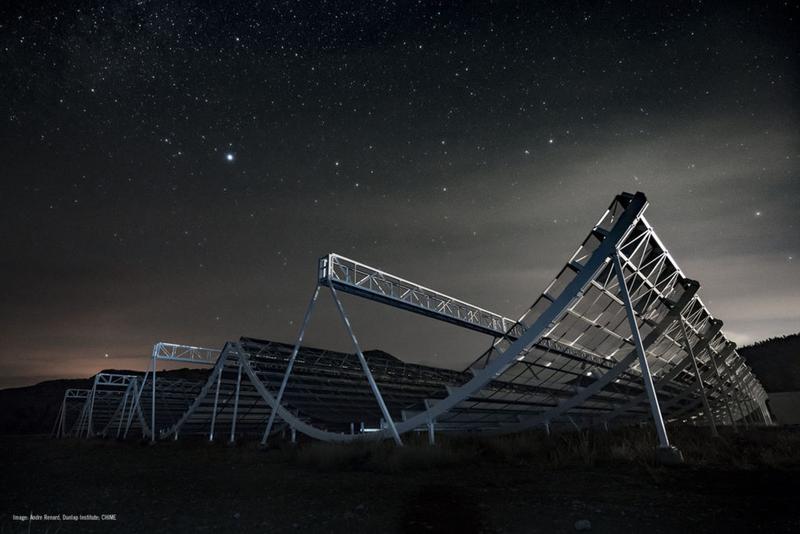 A telescope co-led by UBC researchers is helping us ‘see’ far beyond our galaxy.

CHIME, short for Canadian Hydrogen Intensity Mapping Experiment, is a novel radio telescope used to track the expansion of our universe and to map the cosmic distribution of events like fast radio bursts (FRBs). The CHIME project is co-led by UBC, McGill University, the University of Toronto and the Dominion Radio Astrophysical Observatory (DRAO).

In the pursuit of mapping cosmic events, CHIME has broken records previously unseen in the FRB research community. Within the telescope’s first year of operation in 2018/19, the CHIME telescope detected 535 new FRBs. Before CHIME, under 100 FRBs were observed.

“Fast radio bursts are in some ways exactly what the name says,” said CHIME project member Deborah Good, a PhD candidate in UBC’s department of physics and astronomy. “They are milliseconds in duration — which means they are a thousandth of a second-long bursts of light which we see with radio telescopes.”

According to Good, these short bursts come from outside the Milky Way galaxy and are intermittent, so they may be observed only once or several times.

The bursts observed again are called repeating FRBs since they go through a regular cycle of repeats or periodicity, one example being the CHIME-detected FRB that repeats every 16 days.

During their first operational year, the CHIME team observed 61 bursts from 18 previously reported repeating FRBs and another thirteen repeating FRBs as of July 13, 2021.

The FRB phenomenon was first reported in 2007. Now, the biggest point of debate among astronomers is the bursts’ origin.

“It’s not something the community has agreed upon, but the leading theory is that [FRBs] come from magnetars,” said Good.

Magnetars are a specific type of neutron star, which is what is left after a massive star explodes.

“At the end of their lives, larger stars — maybe 10–50 times the size of the sun — will get very large and then they explode as supernovae and then a lot of that material is sent out as waves,” said Good. “But some of it collapses back in to form this dense core which is called a neutron star.”

The key to finding the origin of FRBs is through localization, said Good.

In August 2020, CHIME’s team received funding from the Gordon and Betty Moore Foundation to develop one of three outrigger telescopes near Princeton, BC. This telescope will be 20 metres in length, shaped like a single half cylinder and will enable better tracing of FRBs to the galaxy in which the telescope first observed them.

The CHIME telescope is ten times the size of the proposed outrigger telescopes, with a stationary 100-metre four-half-cylinder design at the DRAO, a national facility for astrophysical research.

Unlike optical telescopes, the CHIME radio telescope can observe the sky all day long, even when the sun is out. Another advantage is the telescope’s large field-of-view.

“We are seeing hundreds of times more of the sky at any moment in time and then as the Earth rotates, we see different 120 degrees by two-degree strips until eventually, over the course of the day, you see the entire northern sky,” said Good.

Our CHIME to shine

The CHIME team and their revolutionary findings have since gathered significant media attention and became recipients of the 2020 Governor General Innovation Awards (GGIA).

“Conceived, funded, and built by Canadians, CHIME represents an innovative technological achievement as well as a major scientific undertaking that addresses some of the most profound questions facing contemporary astrophysics,” said the GGIA website about the telescope.

“We were all very proud of the Innovation Awards as it showcases how science and technology walk side by side,” said CHIME’s member Mateus Fandino, another PhD candidate in UBC’s department of physics and astronomy.

In early June 2021, the CHIME team put out an FRB catalog, which they presented at the 238th American Astronomical Society Meeting. This catalog is free to access and is updated in line with CHIME’s real-time discovery of FRBs.

Reflecting on her time at CHIME so far, Good discussed the value of these collaborative research efforts.

“We can accomplish much more together as a group than we ever could as individual scientists,” she said.