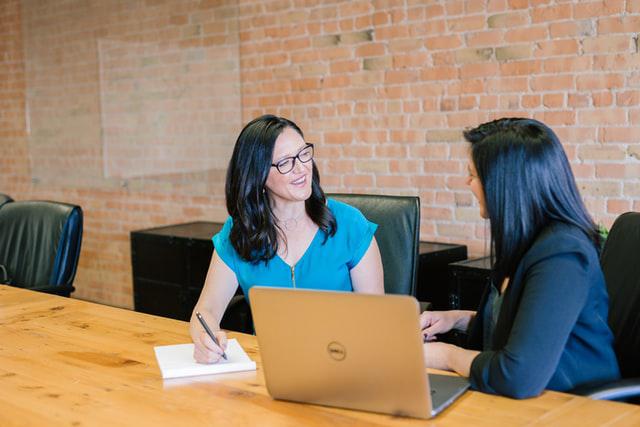 FLIK is an online platform founded by UBC alumni that aims to empower women through volunteer-based apprenticeships that last three months. Amy Hirschi/Unsplash

With a keen interest in consulting and product management, she signed up for FLIK. Marketed as a mentorship platform to empower young women and non-binary individuals, FLIK connects young people with management-level leaders, known as “founders,” for work on volunteer-based “apprenticeships” that last three months.

“I felt like I was not being heard at that point,” she said.

Liu began reaching out to other founders and soon came across a profile that interested her and would give her the opportunity to practice consulting. After communicating with the founder, she was sent the contract. The position was not what she expected.

“It turned out to be a social media management role that I was not informed about or interested in,” said Liu.

“The whole experience makes me feel like I was not seen as a mentee and instead I was just one of the tools available on the platform to help them launch their startup, and there was no sense of mentorship or even efforts being put into fulfilling what the mentee is looking for,” she said.

FLIKering light or a bright idea?

FLIK is an online platform founded by UBC alumni Ravina Anand and Michelle Kwok with support from the entrepreneurship@UBC venture building program.

Women-identifying or non-binary founders or management level leaders join the platform to mentor “apprentices” who receive the opportunity to gain career-relevant experience and skills.

This pairing between founder and apprentice, dubbed an apprenticeship, is encouraged to involve a volunteer venture of no more than ten hours per week over a three-month period. To have access to the pool of available apprentices, founders must pay a fee of US$60 per month which, according to a written statement from Anand and Kwok to The Ubyssey, was implemented to “remain sustainable.”

In a recently published blog article, computer science student Tiger Oakes outlined Liu’s experience with FLIK. According to Oakes, the platform acts as a means by which students can come into contact with unpaid internships under the guise of apprenticeships.

However, according to WorkBC, apprenticeships consist of “paid on-the-job training with learning in a classroom or shop setting.” Apprenticeship training in BC is delivered through a partnership with the Industry Training Authority.

Oakes said in an interview with The Ubyssey that in the technology industry where women are on the whole paid less than men, not being compensated for work is contributing to a bad trend.

“If you’re not getting paid at all, it kind of affects how much you value yourself,” said Oakes.

Dr. Robert Russo, a lecturer at the Allard School of Law, agreed with Oakes that FLIK’s use of the term apprentice is problematic.

“An apprentice in [the] BC legal framework is being trained while working for an employer and under the framework of the ESA [Employment Standards Act] as such is performing work and must be paid wages,” said Russo in a written statement to The Ubyssey. “So an apprentice would have to be paid for things such as learning how to do a job at the employer’s business.”

“The way FLIK have defined ‘apprentice’ is as a volunteer, mentor-mentee type relationship at some parts, but [at] other points they also talk about ‘skills’ and ‘experience’ learned,” wrote Russo. “It appears that the ‘apprenticeship’ contract their lawyers drafted probably has language that would limit the scope of the ‘apprentice’ activities.”

He explained that if apprentice work is limited under contract to “strictly volunteer, mentor type activities for less than 10 hours a week,” then payment may not be legally necessary under the ESA. But this depends on what activities the apprentice is actually engaging in — if the apprentice is doing work that would be expected of a typical employee for the company, including training, then they are likely entitled to payment.

However, Russo noted that he would need to see the contract drafted by FLIK and its lawyers to comment on its application in BC.

Anand and Kwok stressed that their platform “facilitates a match between two individuals which may lead to a mentorship-based experience, which [they] have referred to as an ‘apprenticeship.’”

As the platform supports individuals from 57 countries, Anand and Kwok suggested that FLIK’s members “review the laws and regulations that apply in their respective jurisdictions pertaining to their interactions with people within their region or beyond” as they navigate the apprenticeship.

“Certain jurisdictions may require payment for mentorships depending on the nature of the relationship and tasks being performed,” they wrote.

Further in the blog post, Oakes expressed concerns about FLIK allegedly taking advantage and profiting off of young women.

“It feels especially predatory with the focus on gender, knowing the dynamics of women in tech,” said Oakes. “It’s a strange mission to empower women with the caveat of skirting around actually paying them for work.”

In their written statement, Anand and Kwok stressed the distinction between their mission and unpaid internships.

“Mentorship-based apprenticeships are not unpaid internships and should not be seen as a replacement for other paid work experience,” they wrote. “We do not condone founders using the platform to take advantage of women.”

Oakes also reported that various changes had been made to the FLIK FAQ page since publishing his blog post, including replacing the question “Is this legal?” with “Can this work for me?” A previous version of the page can be found on Wayback Machine.

FLIK removed the $500 recruiting fee from its website, which was intended to be paid by the founder in the event they hired an apprentice. This fee was originally implemented for sustainability reasons, according to Anand and Kwok, but it was never paid by any founders prior to its removal.

Russo added that FLIK’s model raises uncertainty in what is expected of apprentices during their three-month apprenticeship.

“The way the marketing information is conveyed at the very least certainly leaves room for uncertainty and potential misunderstandings in how the ‘apprentice’ is used when placed,” he said.

“Would using the term ‘apprentice’ potentially cause confusion with employers in BC, notwithstanding anything that the contract may legally specify? In my opinion, yes,” Russo said. “Could it lead to ‘apprentices’ actually being assigned work possibly based on misunderstandings? Again, I’d say yes.”

Anand and Kwok wrote that throughout the process of setting up founder and apprentice they are “explicit that FLIK does not provide legal advice on the mentorship details as thousands of matches have occurred across borders in over 57 countries and jurisdictions.”

“When founders sign up onto the platform, they agree to terms which outline that any potential mentees that they decide to connect with will not fill positions or displace employment and that it is their responsibility to review and comply with the local laws and regulations of their jurisdiction,” they wrote.

Despite these concerns, Anand was recently featured as an entrepreneurship@UBC success story.

Kari LaMotte, managing director at entrepreneurship@UBC, explained in a written statement to The Ubyssey that ventures are required to sign a Letter of Engagement, acknowledging they meet all Canadian legal requirements before joining the venture building program.

“We facilitate access to legal counsel to help ventures ensure that as their business evolves they are adhering to labour laws, government regulations and our Venture Code of Conduct,” she wrote.

In the midst of the recent scrutiny, Oakes wrote that the priority should be the young people navigating this platform.

“I don’t want anyone to work with leaders who perpetuate a culture of taking advantage of people, whether intentional or not,” he said.

Over the course of writing this article, numerous changes were made to the FLIK FAQ page. All information written is accurate up to the date of publication.