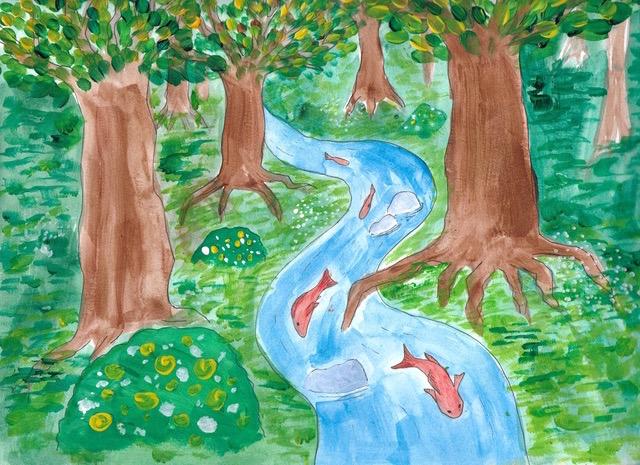 After the culvert was added to the part of the creek running under NW Marine Drive, few assumed that salmon would be able to travel through the culvert and spawn upstream. Lua Presidio

Thanks to a collaborative effort, Salish Creek — one of the last salmon-bearing streams on the Burrard Inlet — has been restored into a more suitable habitat for fish and other wildlife.

First envisioned by Metro Vancouver in 2012, the restoration project was able to progress last year with a $250,000 donation to UBC from the UBC engineering alumnus Colin D. Watson and his wife Barbara. The donation was made in memory of their son Kevin Watson, who was a UBC alumnus with a great appreciation for nature and the outdoors.

The aim of the restoration, completed in June, was to improve the condition of the stream for native fish species like Cutthroat trout and Coho salmon by improving the spawning opportunities for mature fish and overwintering habitats for juveniles.

This involved adding wooden panels called baffles to aid fish migration through a culvert in the stream, adding rocks and other materials to improve the stream’s environment and removing invasive species from the stream’s surroundings.

“The idea behind the [creek] at Salish … was that there were fish there trying to get up but they couldn’t make it up past ... the culvert that was there,” said Don Mavinic, UBC professor emeritus in the department of civil engineering and the project’s principal investigator.

“The ocean up to that culvert underneath … NW Marine Drive was pretty rough country for them to get through.”

The six-year project has seen contributions from many different organizations. Metro Vancouver led the project in partnership with Musqueam Indian Band and Fisheries and Oceans Canada, while individuals from UBC and BCIT provided technical expertise. Northwest Hydraulics and Consultants completed the river engineering and restoration work. Community groups such as the Pacific Spirit Park Society, Wreck Beach Preservation Society and Spanish Bank Streamkeepers were also involved.

Just as the restoration involved a diverse mix of contributors, the creek also bears a diverse set of names. Called Salish by the Musqueam, the creek is also known as Acadia Creek, Hillary Creek and Unnamed Creek. Its headwaters are located in UBC’s Endowment Lands and the creek now travels down Pacific Spirit Park and through a culvert under NW Marine Drive until its lower end merges with the Burrard Inlet.

Over the course of urban development and human activity, the creek had been drastically changed from its original state. Parts of the creek had been re-routed to accommodate for the UBC campus and golf course, while the creek itself had accumulated an abundance of unneeded debris, resulting in sullied waters and a lack of protection for the fish inhabiting it.

The restoration focused on reversing some of these changes and revitalizing the stream to its former state.

“That’s the important part of it. It’s the ‘How do you restore it?’ And not just restoring it, it’s restoring it properly,” said Mavinic. “It’s trying to replace what Mother Nature’s already set up.”

After the culvert was added to the part of the creek running under NW Marine Drive, few assumed that salmon would be able to travel through the culvert and spawn upstream. A 2011 video from the group Streamkeepers, however, revealed footage of an adult Coho salmon attempting to flip into the culvert, presumably to spawn. It was assumed that the Coho had failed, but the video still attracted public attention.

“It turns out that the Coho population is a unique genetic species — I think there’s only two or three of them in the entire province, and it’s at risk of being wiped out, essentially,” said Mavinic.

“And so… this is probably worth a shot at trying to restore this little creek, at least part of it, [to] give these fish some opportunity to spawn. And that’s how we approached this whole thing.”

Before the creek restoration project started, baffles were installed in the culvert to slow the velocity of the water passing through it, with the intent of allowing fish to move in between the baffles and migrate upstream without being pushed back by water from the culvert.

Typically, streams follow what is called a riffle-pool sequence, which describes the water’s flow structure as it moves from areas of shallow to deep water. Riffles appear rippled and fast-flowing because the water in them passes over gravel deposits and coarser materials in the shallower parts of a stream. Pools, by contrast, are the calmer and deeper areas of a stream where the stream bed is composed of smoother material like silt.

Both riffles and pools contribute to a healthy stream environment: oxygen essential for wildlife is added to the stream when water is churned as it passes over riffles, while pools provide still areas for fish like salmon to rest, spawn and hide from predators.

Salish Creek had few riffles or pools before the restoration, but by placing objects such as boulders, rocks and woody debris, a healthier stream environment was recreated. Northwest Hydraulics Contractors placed rocks to create riffles, adding oxygen to the aquatic environment, and used log sills to create sandy pools for salmon spawning.

“These things are strategically placed, the creek was channelized a different way all the way up to the culvert that’s there, and Fisheries put some baffles in there so it makes it easier for the fish to come up,” Mavinic said. “At least [the fish have] got, oh I’m guessing, maybe two to three hundred metres now of opportunity to spawn in the lower section that they never had before.”

“These [changes] are important, because what looks like a mess to us is very important from a fisheries perspective,” he added.

Since the restoration, the department of Fisheries and Oceans has occasionally reported sightings of salmon fry in Salish Creek, although it is unclear if these fry are from salmon that are spawning in the creek. More time is needed to determine whether the salmon population is returning to the creek, and the number of returning fish will be monitored by Metro Vancouver in the upcoming months and years.

Other species such as otters, beavers and Cutthroat trout have also been spotted in the area.

Mavinic said that there is also interest in expanding the restoration project all the way to the top of the creek where its headwaters are located, near UBC’s Endowment Lands.

“I think now [the creek is] in good shape, from what I’ve seen and what I’ve been told by my colleagues at Fisheries and over at Northwest Hydraulics,” Mavinic said.