T. rex and environmental responsibility: What I learned on a walk through Beaty 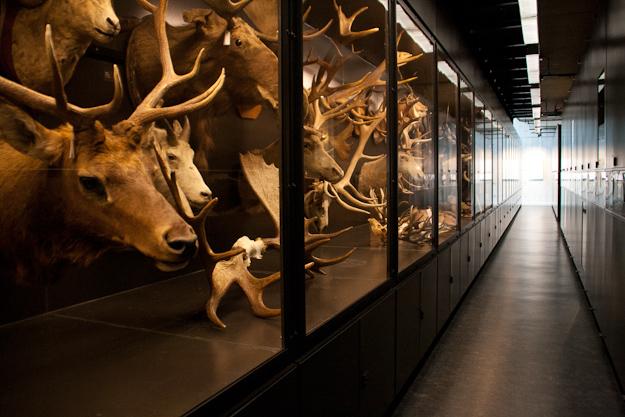 Its website boasts that two million specimens are housed in its 20,000 square feet, but also mentions that the museum has an active research collection. File Yara De Jong

Walking into the Beaty Biodiversity Museum, you’ll immediately find yourself pondering a few questions. What’s being stored on the lower level? How much is this adorable hand puppet? And, perhaps the most-asked question for the museum’s staff, There’s no way that huge skeleton is real … right? The curiosity sparked by the space is certainly no accident, as the museum’s foremost concern is with sating your scientific appetite.

Inside the museum’s atrium, you wouldn’t be blamed for being a bit daunted by the sheer size of it all. Even ignoring the suspended blue whale skeleton — which is easier said than done — it’s hard not to be blown away by the building’s open-air layout. It serves to both impress you while also pulling your eye down to its lower levels, where the biological specimens you’ve heard all about reside.

But the museum’s offering of seemingly endless knowledge is a lot like the building itself — it gives you so much to work with that you’re both raring to go and paralyzed by choice. There are plenty of placards to tell you what you’re looking at, but you might find yourself wanting for a more human touch.

That’s where the museum tours come in.

Led by museum staff, a tour through Beaty makes you feel like you’re the first hominid to crack two rocks together and get a spark. This past week, the museum celebrated Science Literacy Week by reiterating how determined it is to teach you anything you’d like about the astounding number of flora and fauna specimens it has in its halls. Starting with the local animals display, the museum begins working its magic by reintroducing you to the animals you’ve grown up reading about or watching on TV, adding facts you never would have known otherwise.

You’re walked through how a penguin’s wings evolved to become perfect for shooting through frigid waters. You’re amazed by how varied coral can be from one species to another. You’re confused by the similarities between popularized prehistoric predators and the modern-day chicken, while also amused at the thought of a Tyrannosaurus rex bobbing its head like its probable descendent.

But the museum doesn’t only have fun facts about regenerating starfish.

Every few shelves stands an infographic or placard that reminds the viewer exactly how influential Homo sapiens sapiens have been the past few hundred years. From New Zealand’s kiwi bird population being decimated by imported invasive species, to BC trees suffering longer pine beetle infestation due to a warmer climate, the Beaty doesn’t shy away from placing the blame where it belongs.

Like the other, lighter scientific topics one is invited to explore, the museum breaks down humanity’s impact on the world’s biosphere exactly as any researcher would: with hard numbers and easily-communicated results that give the information a degree of accessibility. Accessibility in this context means learning a lot more about our species’ terrible impact on the planet.

Walking through the shelves and viewing the many placards that adorn them, you start to wonder why the museum operates the way it does. Its website boasts that two million specimens are housed in its 20,000 square feet, but also mentions that the museum has an active research collection. This means the majority of those specimens will be used by scientists, but will never actually be put on display.

So if the Beaty is actually a storage facility, why does it sacrifice square footage to become a museum? The answer isn’t likely to be money, given the admission rates are nothing exorbitant, and visits are free for card-carrying UBC students. So you start to wonder: what purpose does the Beaty serve?

It’s hard to argue that the Beaty isn’t shooting for that goal in every part of its exhibits.

From the jargon-less language on placards describing plant pressing, to the active encouragement to ask museum staff questions, everything about the Beaty is there to help you understand what lives around you and in every corner of the globe. Even the job title of the tour guide, identified by his tag as a “museum interpreter,” indicates the lengths the museum goes to to make sure the curiosity it encourages is rewarded with accessible and informative answers.

After the tour, speaking with museum interpreter and UBC student Vincent Sayson helped to understand what he aimed for when giving tours in Beaty.

“[I do it] to spark any further interest to pursue something, whether it’s further research or advocacy,” he said.

“You need that fascination, that kind of wonder … But if I can just get people to say ‘Oh, that’s neat,’ I think I’ve already succeeded.”

Once they’ve taken their last required science course, whether that is high school chemistry or EOSC 112, many people find themselves falling out of interaction with scientific theory and research, often due to a perceived lack of relevancy to their own lives. Sayson said that finding science that intrigues is as easy as examining the little things in your everyday routine.

“The decisions we make personally and on bigger levels, like what kind of food we eat, what we put into our environment, things that affect our lives. Yeah, people are experts in things because not everyone has to know how to do everything, but just understanding a bit more so we can know where to turn to when we need more information is a big help.”

And while things like a huge museum or the details of gravitational waves can seem like they’re the end-all be-all for science literacy, Sayson reinforced that there are as many ways to become engaged in science as there are interests you can have.

“I always say that everyone’s a nerd about something. People who get really into fantasy football leagues? That’s statistics,” he said.

“I think it’s great to pursue something intellectual, but sometimes you can just follow what you’re interested in, and then there you are.”