With Ada’s return home, SailBot team vows to sail around the world 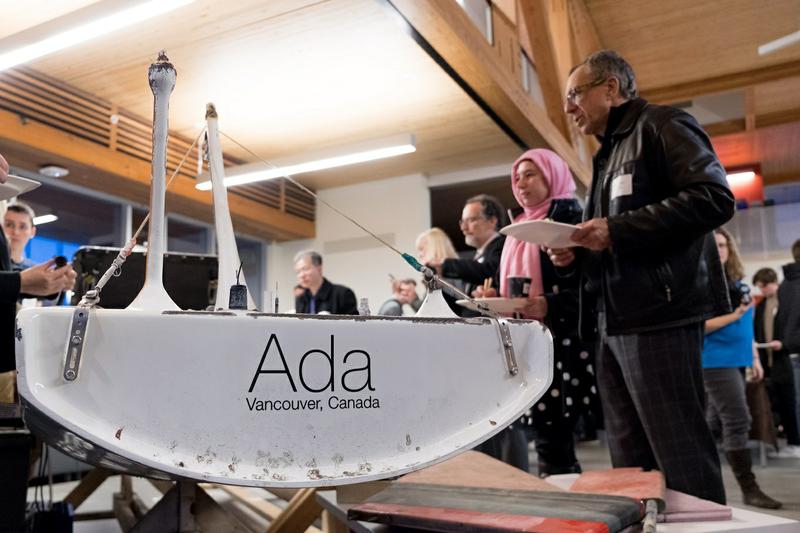 “It is sentimental, and crucial to building the next boat,” said UBC SailBot team captain Serena Ramley, summing up what Ada’s return means.

In a private event Monday night, the UBC SailBot team announced the initial findings into what prevented Ada from completing her goal of being the first autonomous sailing robot to cross the Atlantic Ocean. The team also officially announced the name of their newest SailBot, Raye, named after Raye Montague, a United States naval engineer who was the first person to design a ship’s hull digitally.

Raye’s initial design was unveiled, with the team vowing to build a SailBot that will sail around the world. The team reached out to Raye Montague, and her son wrote back on behalf to say she was “honoured to have the boat named after her.”

“We consider it a great honour that she is letting us name the boat after her,” said Ramley, a fourth-year integrated engineering student. “She said it made her feel like her work in her career was worth it.”

Ada was displayed in the Engineering Student Centre and showed obvious signs of her ordeal at sea.

“Things literally went south,” joked Madie Melcer, a member of Ada’s design team and current member and leader on the Raye, referring to Ada’s sudden turn south when she was a quarter of the way across the Atlantic, the first sign something was wrong. “She literally went through multiple category five hurricanes.”

The team revealed that when Ada’s sail was ripped off (likely by high winds) it took several sensors off with it and opened numerous cracks in the hull next to a battery hatch designed to keep electronics dry. The linkage connecting the motor that controlled the rudder was also damaged and had a bolt missing. This was likely why Ada turned south unexpectedly and the subsequent loss of steering. 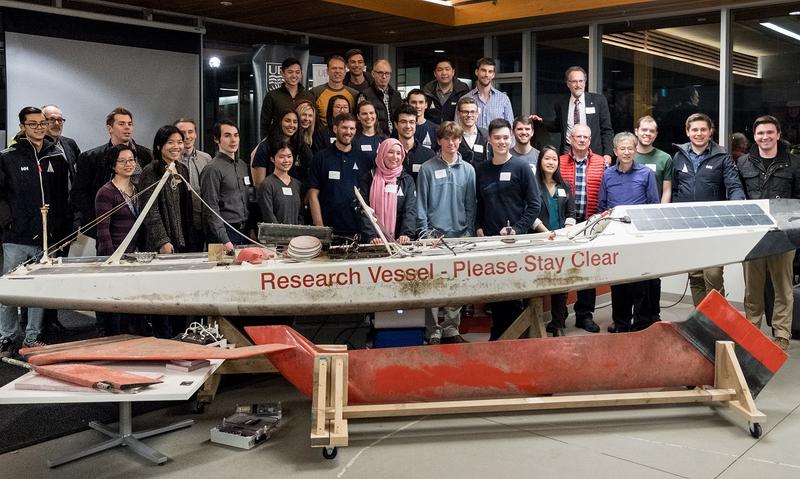 Learning from the shortcomings of Ada, Ramley explained that Raye will be built with two rudders, two sails and a new power system, adding redundancy to prevent future failures. Raye will also be the first boat with a hull designed by students. In the past, Sailbot’s boats have had their hulls designed by professional boat builders. Raye’s hull will be wider — and stronger — than Ada’s.

“I think it also gave closure to the team,” said Ramley of the bot’s return.

“Ada is a fantastic example of what UBC engineering students can do,” said Green to the crowd of current and former SailBot team members, faculty and sponsors of Ada. “This is greater than anything that could be done in the classroom. We are committed to creating an environment where this kind of learning can take place.”

Ada’s future is still uncertain, though Ramley said they are hoping to display her in a Vancouver museum or on campus eventually. One possible location would be to place her in the mechanical engineering student lab, a space that would leave Ada visible to people walking on Main Mall.

“She would be like the whale to engineers,” said Ramley. “But we are trying to decide what would be a good home for her. We will be revisiting it when Raye returns.”

Green added he was looking forward to following Raye’s adventure. However, Green may have to wait a while as Ramley said the team has yet to set themselves a hard deadline to complete Raye by but said they are still planning on entering her in the Vic-Maui Yacht Race, a competition where manned boats race from Victoria to Maui, Hawaii.

Ramley also said the team had set an (eventual) goal of building a SailBot to sail around the world. Learning from Ada, and Raye eventually, Ramley is confident the team can do it.

Ada’s story, it turns out, is just the beginning for this ambitious student team.

“It’s about building the future of engineers,” said Ramley.