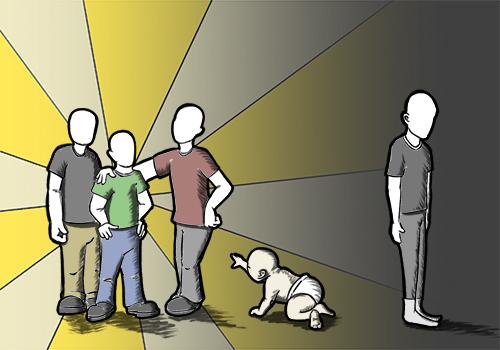 A new study by researchers in UBC's department of psychology has shown that babies as young as six months may be much more conscious of social dominance in relationships than previously thought.

Even at the tender age of six months, babies can understand that individuals that are part of larger social groups are socially dominant to those in smaller groups, suggesting that they may be able to reason about complex social concepts within the first few months of life.

“In many social species such as chimpanzees, lions, hyenas, lions and even insects, we see a preference towards being in bigger groups when they need to be protected,” said Anthea Pun, a graduate student in the developmental psychology program and lead author of the study. “We really were motivated by this evolutionary history to explore whether babies are born into the world with some sort of concept of number and whether they are able to use that information to understand that being part of a larger group may be advantageous to you.”

As part of the study, the developmental psychology research team in the Living Lab at Science World explored whether infants from families in the local community can infer the dominance relationship between two people from groups that differ in numerical size.

Babies were shown two different novel social groups that they were not familiar with, distinguished by colour and how many members were in each group. Each group had the same goal of trying to cross a platform. But because they were coming from opposite directions, one had to submit to the other by backing away, which meant that they were the submissive character whereas the dominant character was able to pass successfully.

“Because babies are still pre-verbal at this age, we rely on their looking times — how long they are engaging with the stimulus in front of them. When babies see something that is unexpected or surprising to them, they stay engaged for a longer amount of time, resulting in a discrepancy if they are noticing differences between an expected and unexpected trial,” said Pun.

It was found that babies looked longer when a character from a smaller group had to complete their goal at the expense of the individual from the larger group. Therefore, babies expect characters from larger groups to get their way and to be more dominant compared to individuals from smaller groups.

“The most fascinating thing is that — although babies as young as six months of age are still really encompassed only by their family — they already have some sort of pre-prepared learning about social alliances,” said Pun. The fact that babies thought that there were better advantages from the larger group means that they are making some sort of connection between how many people [that] are there to back you up in a social group.”

The babies recognized the benefits of larger social circles even if an individual is not the biggest or strongest in the group.

Pun hopes to continue to advance infant research to explore babies’ behavioural choices in social situations and to understand the kinds of human competencies and abilities that may have a longer evolutionary history.

“We have a number of questions beyond the fact that it is fascinating that babies understand social dominance relationships this young. Do babies themselves want to be part of these larger groups because they know that there can be some sort of advantage conferred there? We’re interested to see whether babies themselves will choose to be part of a group that is larger because perhaps they see the benefit in aligning with them.”