Those aged 25 to 34 will be able to get their first dose in August and their second dose in September, and those aged 18 to 24 will be eligible for both doses in September. File Unsplash/Daniel Schludi

The province has released its age-based COVID-19 immunization plan, which aims to vaccinate approximately 4.3 million British Columbians by the end of September.

The plan is divided into four phases, with phases one and two focusing on immunizing those with increased likelihood for severe illness, and phases three and four focusing on the general population. BC is currently in phase one of its vaccination plan.

Phase one began in December 2020 and will extend until February. Included in this phase are residents and staff of long-term care and assisted-living facilities, healthcare workers who may provide care for COVID-19 patients and remote and isolated Indigenous communities. Phase two will span from February to March and will include seniors over the age of 80, hospital staff and general practitioners who were not immunized in phase one, Indigenous seniors over the age of 65 and additional Indigenous communities.

Phase three will span from April to June and will be the first phase open to the general population. Both vaccination doses will be eligible to people aged 60 to 79 and those aged 16 to 69 who are clinically extremely vulnerable. The groups are divided into five-year increments, with order of vaccination going from older members of the cohort to younger members. Lastly, phase four will extend from July to September and will be open to the general public aged 18 to 59.

More specifically, those aged 25 to 34 will be able to receive their first dose in August and their second dose in September, and those aged 18 to 24 will be eligible for both doses in September. 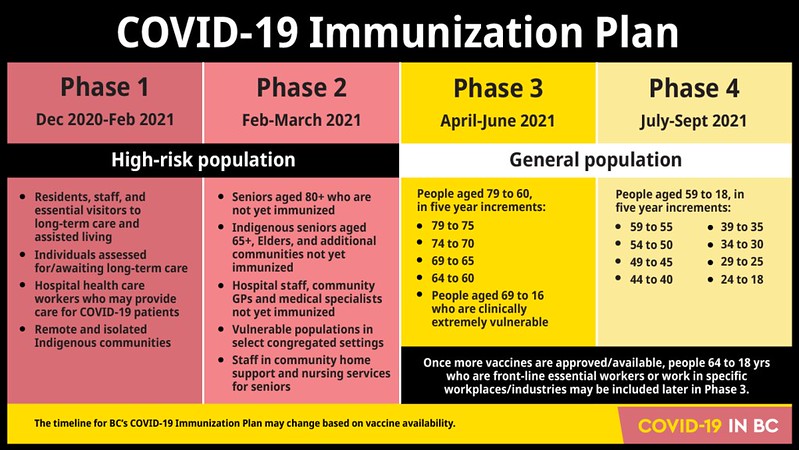 While some British Columbians initially anticipated a priority-based approach grounded in professions and other risk factors, the province opted to take an age-based approach due to evidence of increasing age being one of the greatest risk factors for severe illness and death from COVID-19. This risk increases exponentially over the age of 70.

The timeline for the plan is currently based on predicted supply of the two COVID-19 vaccinations approved in Canada — the Moderna and the Pfizer two-dose vaccines. If additional vaccines are approved, the province may move those aged 18–64 that work in specific industries to phase three. Currently, the AstraZeneca and Johnson & Johnson vaccines are pending approval in Canada.

Those planning on getting vaccinated can pre-register two to four weeks prior to their vaccine appointment eligibility. Immunization clinics for phases three and four are being organized in 172 BC communities, and will include school gymnasiums, arenas and community halls.

To date, over 100,000 doses have been given in BC since vaccination began in December.