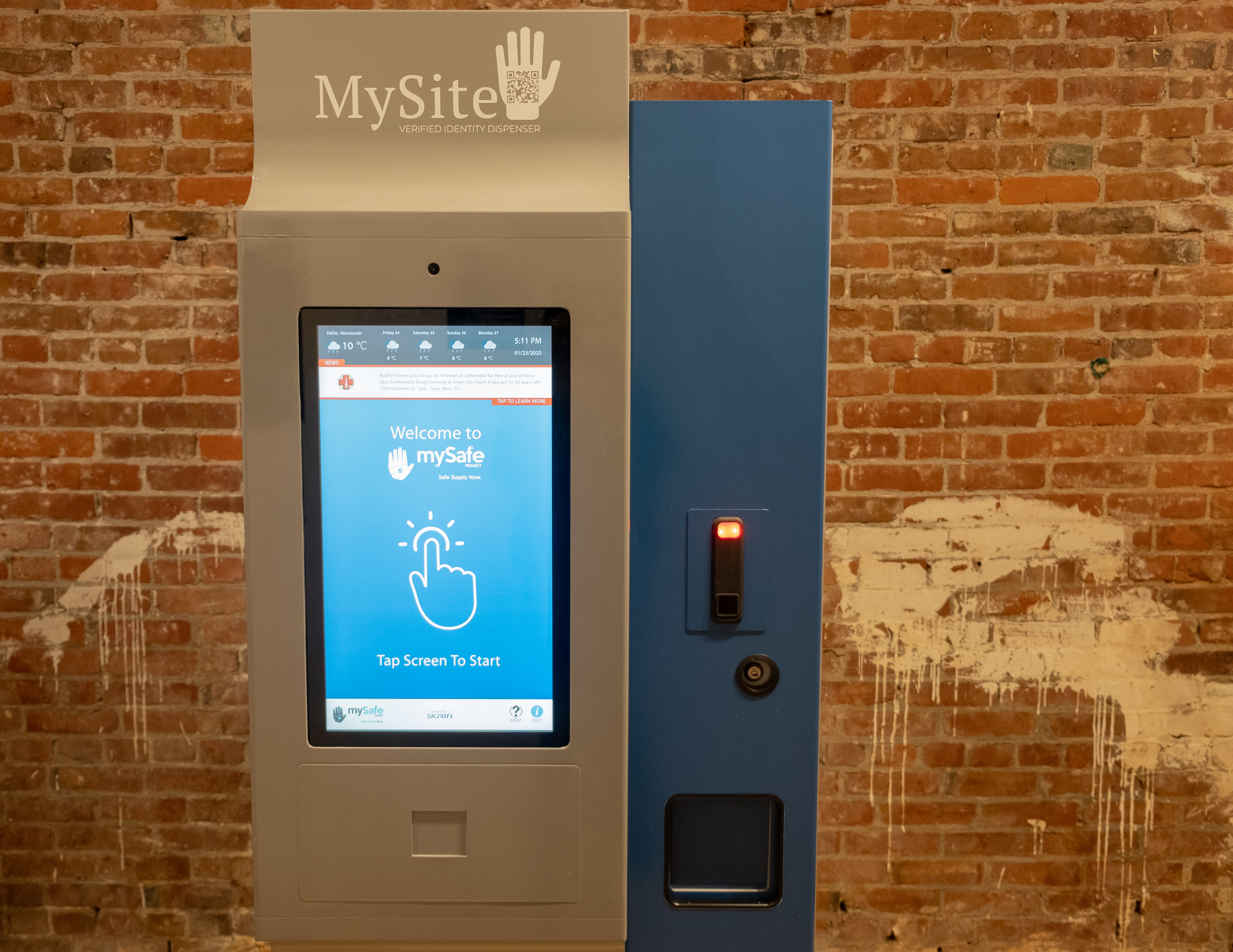 Tyndall stressed that the machine serves as a “safe box” for participants to keep their prescriptions, rather than dispensing opioids for anyone. Alex Nguyen

In a city that has seen over 5,000 overdose deaths since 2016 because of contaminated drugs, Tyndall sees the initiative and safe supply as the “next frontier of harm reduction.”

Walking along a wall lined with photos of Downtown Eastside (DTES) community members and their dogs, Kevin sidestepped an interview to reach the 800-pound machine in the middle of the room. He tapped the blue screen that reads “Welcome to mySafe” and raised his palm to the scanner, which flashed blue then green. The machine hummed before releasing a small packet of hydromorphone pills, a legal opioid that serves as an alternative for heroin.

Despite the machine being the world’s first biometric opioid dispenser, the process only took about 10 seconds, said Kevin, who is a peer support worker at the site.

“If your hands are dirty or something, [the machine] can't read and you might have to wipe it off, but there's really no barrier at all,” he added.

Kevin also knew exactly how strong the pills were, despite not having to do any testing.

For Dr. Mark Tyndall, professor of medicine at UBC’s School of Population and Public Health (SPPH), this certainty is the goal of his MySafe Project. And in a city that has seen over 5,000 overdose deaths since 2016 because of contaminated drugs, Tyndall sees the initiative and safe supply as the “next frontier of harm reduction.”

The MySafe Project has been long in the making.

According to Tyndall, he first spoke about distributing safe supply through a “vending machine” in 2018. But after doing around 20 interviews subsequently to try to roll back the idea, he decided that it was “the greatest idea [he’s] ever had.” He then worked with a company called Dispension Industries to build a prototype, finally unveiling the machine in December 2019.

Tyndall stressed that the machine serves as a “safe box” for participants to keep their prescriptions, rather than dispensing opioids for anyone. Hence the biometric scanning, which works to recognize the patterns on the participants’ palms.

It’s also a way to address the unstable housing conditions that many DTES community members face as well as the risk that comes with using alone.

“They don't have a fixed address, [so] clearly asking people to take two or three weeks of these medications and store them is very challenging,” he said.

“… We also know that over 80 per cent of people who have died of an overdose in this community are found dead in their rooms [and] by themselves, so the other big hope for this program is that we can draw people out of their rooms.”

Welcome to the account for MySafe safe supply dispensing machine, the first of its kind in Canada. Please feel free to share this video in your reporting. If you need further comment, please DM. Thank you. https://t.co/01R9RMbtw5

As of January 22, there are 10 participants, with many being volunteers for the Overdose Prevention Society (OPS) whose site is next door to the MySafe Project.

OPS Executive Director Sarah Blyth said she is already seeing positive impacts from the initiative, from easing access for people with disabilities to making it safer for people to get their drugs.

Similarly, in response to criticisms that the project doesn’t address addiction, Tyndall acknowledged that the primary goal is not to solve that issue. But he believes by removing the need for the often-dangerous hustle that people have to go through to get illegal drugs, they can have more time to seek treatment.

‘We got to progress’

In 2019, the province saw a decline in the number of overdose deaths, but Tyndall pointed out this is more likely because the community has trained “an army of people” who know how to use naloxone, an opioid antagonist, to reverse overdoses.

Canadian Students for Sensible Drug Policy (CSSDP) is supportive of the MySafe Project for its potential in moving the discussion beyond reacting to overdoses, said Stephanie Lake, a PhD candidate in UBC SPPH and co-founder of the CSSDP UBC chapter.

“The overdose prevention we've done to stop people dying, it's really the bare minimum of what should be done,” she said.

“We don't want people to be further damaged. … It’s especially shameful because it's our most vulnerable folks in society a lot of times with mental health issues, with disability issues … so we got to move forward, we got to progress and actually making people's lives better.” 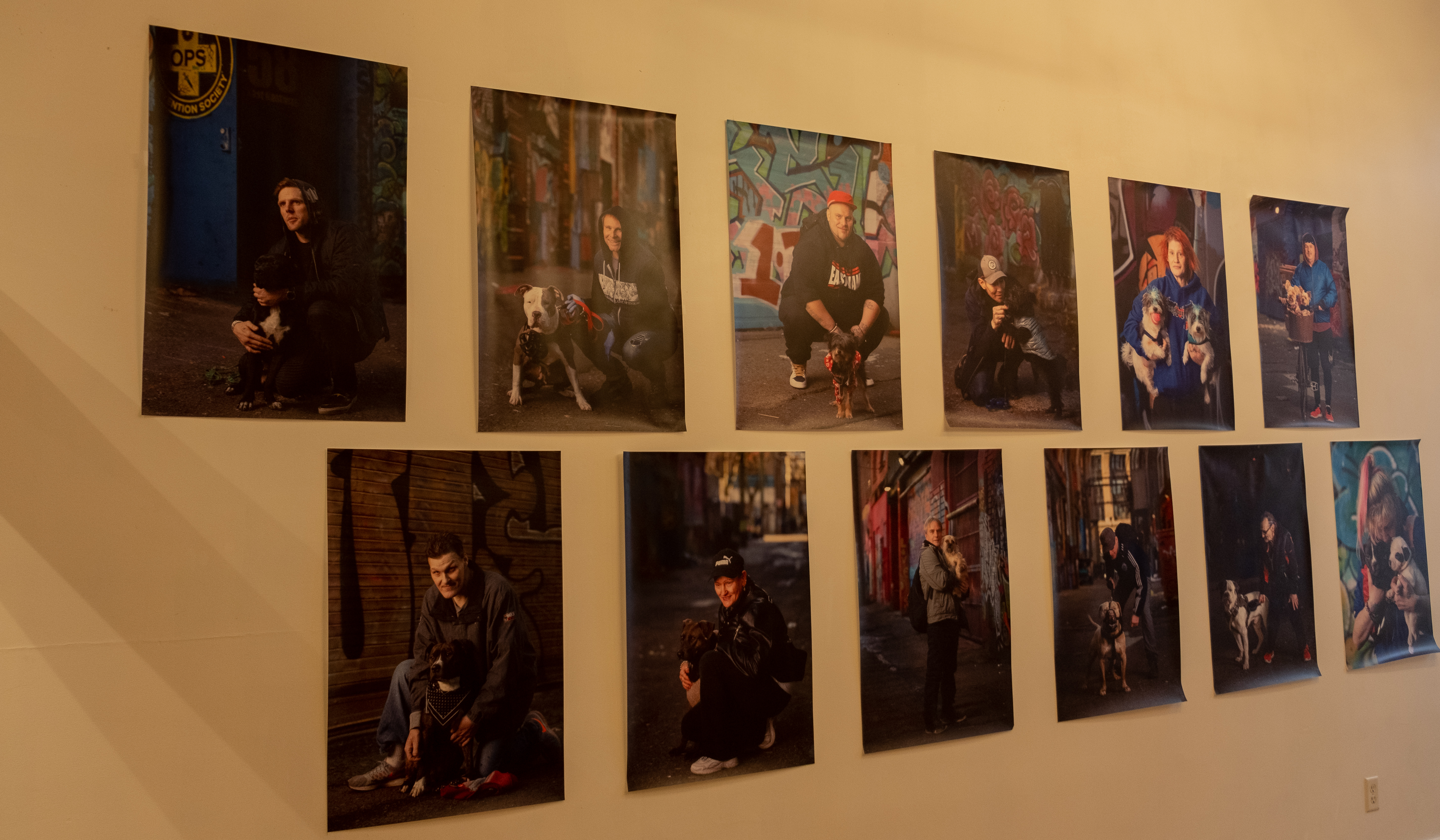 The lobby’s wall is lined with photos of DTES community members and their dogs. Alex Nguyen

With room for 38 more participants, Tyndall is working to scale up the program. But while he believes replicating the machine would be relatively inexpensive, he says there are still challenges because he doesn’t “have endorsements from all the policymakers that are necessary.”

As reported by Global News, the MySafe project has received support from the Vancouver Police Department. In a statement to The Ubyssey, the College of Pharmacists of BC also says it “welcome[s] new and innovative approaches to helping those with substance use disorders that still ensure public safety.”

But MySafe is still operating separately from the BC Ministry of Mental Health and Addictions, according to the same Global News report.

“Most of pretty much all of the innovative harm reduction that's ever occurred in Canada has not been top-down,” Tyndall said.

“It’s always been pushed by the community and really this whole program so far is based on community support and so it's really encouraging that I get have really the community on side and hopefully we can push from the bottom up.”