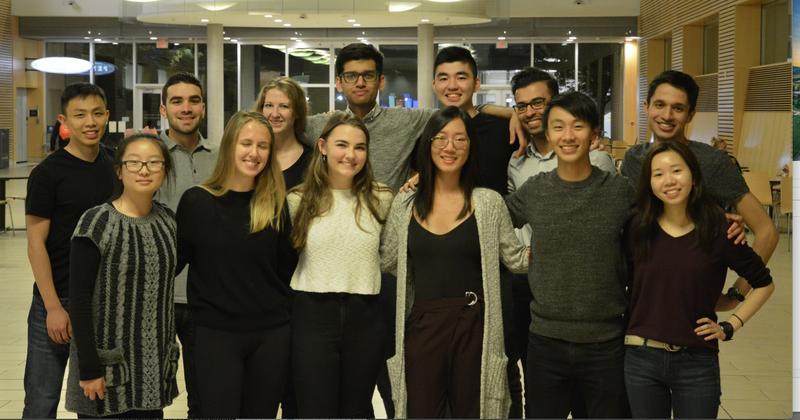 The team had an interest in developing a treatment that targets cancer cells. Courtesy UBC BIOMOD

On October 26, UBC’s BIOMOD (biomolecular design) team won third place at the BIOMOD Jamboree annual conference in San Francisco for its discovery of a potential new treatment for leukemia, a group of cancers that arise in blood and bone marrow.

Starting in July, this innovative team of 14 students began its quest to synthesize a drug delivery vehicle that can specifically target AML cells.

AML is present in the blood and bone marrow of patients, so there is no tumor that can be surgically removed. Moreover, AML patients are often too old to withstand the toxic side effects of chemotherapy treatments. Thus, using targeted therapy treatment is highly effective for these patients.

The team had an interest in developing a treatment that targets cancer cells similar to antibody drug conjugates (ADCs) but without the associated complications. ADCs are a way of targeting the delivery of cancer medications.

“This antibody drug conjugate, Mylotarg, was available for AML. It was helpful for a lot of people, especially people who couldn’t recover from traditional chemotherapy,” said Siddarth Raghuvanshi, a fourth-year chemical and biological engineering student and captain of the UBC BIOMOD team.

“ … It wasn’t the best approach in terms of targeted drug delivery so we decided to [use] aptamers and DNA tetrahedrons instead.”

The reason Mylotarg was removed from the market was likely due to early release of the chemotherapy drug into the bloodstream instead of into the target AML cells, resulting in toxic effects in patients.

To avoid this issue, the team decided to include DNA tetrahedrons, a structure composed of four DNA strands that can easily enter the cell’s nucleus, as part of their drug delivery vehicle. The aim was to allow Doxorubicine, a chemotherapy drug used for AML treatment, to associate with the foreign DNA structure.

“After about 72 hours, the foreign DNA structures are broken down and then it releases this drug [Doxorubicine]. By that time it’s hopefully already in the nucleus.” said Raghuvanshi.

“So our next step was to add a targeting system. This is where the Mylotarg came in handy, it targeted a specific protein for AML which is called CD33. CD33 is just a surface protein that’s expressed on these cells” said Raghuvanshi.

Instead of using an antibody that is specific to the CD33 receptor, the team chose to synthesize aptamers. Nucleotide aptamers are short DNA or RNA strands that have high specificity with the target molecule or protein of interest which, in this case, is CD33.

“Once [the aptamer] binds…then [the drug] is endocytosed using receptor-mediated endocytosis and goes straight to the nucleus. So this way, the DNA tetrahedron structure doesn’t just attack every cell, it finds its way to the cells that we want it to attack” said Raghuvanshi.

According to Raghuvanshi, the most challenging part of the project was ensuring that the aptamers in their drug delivery vehicle were properly binding to the CD33 receptors in the AML cells. After running a lot of tests that did not provide conclusive results, the team reached the solution of adding a fluorescent label on the aptamer. This fluorescent label allowed them to visualize when the aptamer is bound to the AML cells.

This is just an example of the numerous experiments and trial runs the UBC BIOMOD team went through to reach its final result. By mid-October the team had wrapped up its project and were preparing for the conference in San Francisco.

On the last weekend of October, the UBC BIOMOD team successfully presented its project and won third place.

“I was really fortunate to have a lot of capable and talented lab members whose skills were varied,” said Raghuvanshi.

The UBC BIOMOD team also reached out to UBC faculty members and students to learn from their expertise. This provided the team with opportunities to collaborate in multiple labs and use a variety of resources.

“[You have to talk] to people who are not on the team and [find] out a good way to communicate why your project is important,” said Raghuvanshi “I think that’s probably one of the more important experiences I got out of BIOMOD.”