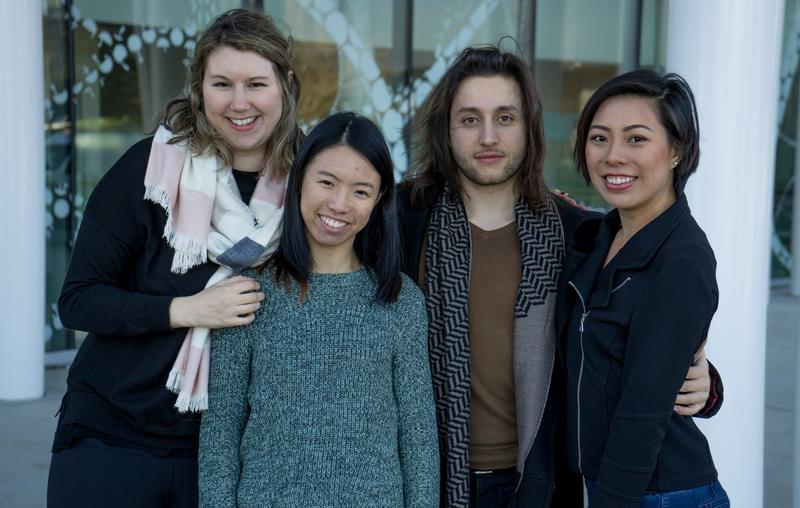 The problem: UBC has a lot of cool neuroscience research, but it’s hard to communicate science easily and effectively. The solution? Make neuroscience vids.

A group of UBC-ers are visiting labs and creating bite-sized neuroscience videos in order to break the traditional barriers of science communication and educate others in a fun and engaging way.

Brain Bytes is a science communication initiative that aims to bring neuroscience research from UBC to the public, breaching the obstacles that often exist between conducting science and communicating it to a general audience. A collaboration between UBC’s department of neuroscience and school of journalism, the project is funded by UBC’s faculty of medicine, with a Graduate Student Initiative Fund from UBC’s department of neuroscience.

So far, the productions investigate topics such as the impact of cholesterol in Alzheimer’s disease, sex bias in research, postpartum depression in the female brain and testosterone production in the brain.

“We noticed that there was a problem in science communication,” said Michael Ruffolo. As the journalist for Brain Bytes and a recent graduate of UBC’s school of journalism, Ruffolo is in charge of the production of the videos, including the interviewing, filming and editing of the series. “It’s tough to bridge the gap from peer-reviewed, academic work to, well, how does anyone who isn’t the author understand this work?”

Executive producers Sonja Soo and Alyssa Ash, both UBC neuroscience students themselves, work to develop and coordinate the project. Their work includes recruiting scientists for filming, communicating with various neuroscience labs, providing editorial input and handling administrative processes. They are joined by Stephanie Tran, who handles finances, budget management and liaising with contacts.

“Right now, how we currently oftentimes communicate science is through conferences, to other scientists, to people in our lab, people in our building,” said Soo. “So we want to reach a broader audience around the world through these videos, through these online platforms.”

The project began as a “video abstract” idea that some academic journals have adopted, where research papers are accompanied by a video that conveys key information such as the main findings and methodology. These video abstracts are meant to communicate science more easily and effectively. The idea for Brain Bytes then expanded to a movie format that encompassed the importance and relevance of research, with a greater focus on reaching out to the public.

The Brain Bytes videos, which run for about eight minutes, are meant to be easily digestible for the public. Posted across a variety of popular social media such as YouTube, Twitter and Facebook, as well as science-related outlets like the Centre for Brain Health, the online video format combats traditional barriers to communicating research, which is often restricted within the academic community.

“Another thing with science research that’s peer-reviewed is a lot of it isn’t accessible outside of the university bubble, due to access to journals that are paywalled,” explained Ash. “A lot of people can’t get to scientific findings and so it’s a nice way to break through that and make things out in the open.”

The importance of science communication

The Brain Bytes team stressed the importance of science communication, the main purpose of their project, which Soo described as having multifold benefits.

“First it helps public perception of science — what people think of us as scientists and what we do,” Soo said. “It’s also important to educate the public about how science is conducted and how we follow the scientific method, how we produce data and how it is reproducible, and how we get reliable data.”

Unlike applied research, where research is applied to situations to solve problems directly, the aim of basic research is often to develop or improve scientific theories to better understand and predict natural occurrences. Applied research in medicine, for example, might investigate how certain drugs affect the brain to reduce anxiety, while basic research in the same area might instead explore how the brain itself functions.

“Without that funding, labs can’t run properly and they can’t have enough research going on so it would limit the potential for discoveries,” Ash explained. “You need this funding to come in to enable that and so it’s just really important for the whole field.”

The Naylor Report, a 2017 report that reviews Canada’s federal funding of science, advocates for increased public funding of science and has demonstrated that the total grant funding per researcher has continued to decrease since 2010.

Referring to Brain Bytes’ second video, which explores postpartum depression in the maternal brain of rats, Ash explained that basic research conducted on animals could yield later benefits to humans.

“Indirectly, we want to promote the research here at UBC and raise the awareness of how even something basic with a rodent model could be applied to humans down the line.”

There has been movement in the scientific community to combat this decreased public funding of science in Canada, especially for the 2018 budget year. The Naylor Report has its own #supporthereport movement from scientists on social media. And of course there is Brain Bytes, which aims to bring basic neuroscience research to a general audience as well.

“Basically the whole idea behind Brain Bytes is a platform for us to communicate science to people, but also for them to start a conversation with people [and] the public too,” Soo said. “Because we put [the videos] on platforms that are easy to communicate [with] like Youtube — people can comment, we can see their feedback — and we can also see what their perceptions of science, of us are, and for us to see the values of science in the public.”

Behind the scenes of a Brain Bytes video

The typical process for creating a video begins with recruiting interviewees. Ash and Soo handle this step by searching for researchers, screening for relevance and ensuring the researcher’s study can be conveyed in a video format.

The researchers interviewed are UBC’s neuroscience graduate students who have published peer-reviewed journal papers in the past year or so. “It’s usually great for them because it’s something they can show on their CV, and just being able to learn how to communicate their work is also another skill they develop as they work through the video,” Soo explained.

After obtaining consent to shoot the video, Ruffolo first meets the interviewee for a pre-filming interview in order to understand their research and brief them on filming process. Ruffolo then uses the discussion from this pre-interview to conduct further research on the topic, formulate interview questions and identify talking points before the shoot.

The next step, shooting the video, usually spans one day and involves filming, interviewing and taking over a lab section to record the machines, techniques and devices that are used in the neuroscience lab. Post-filming, Ruffolo spends four to five days editing before the videos are released through multiple social media channels.

“It brings some personality to lab coats,” Ruffolo added.

Future plans of the project include more videos and potentially bringing the initiative to different departments outside of neuroscience, in addition to possibly creating a supplementary podcast with extra content from the interviews that could not be included in the final videos.