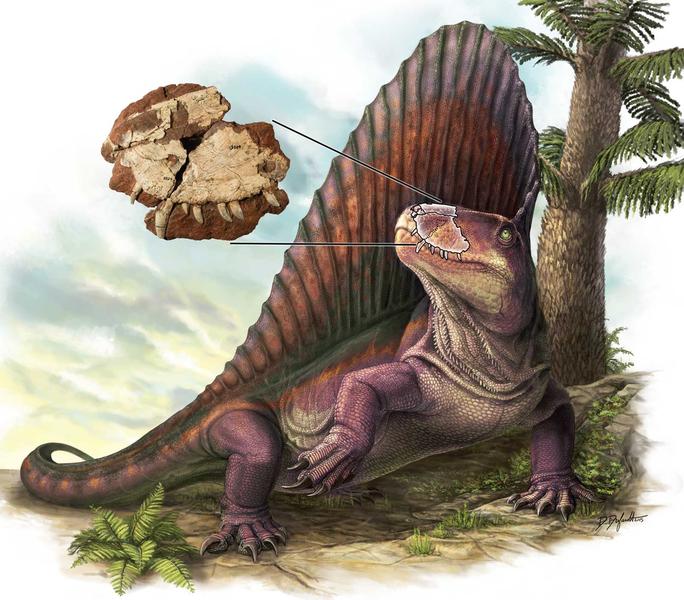 An artists recreation of the dimetrodon that shows the fossil that was studied. Reconstruction courtesy Danielle Dufault

A fossil found in 1805 on Prince Edward Island has finally been identified by a UBC postdoctoral fellow.

The fossil of the dimetrodon was first was first found in 1805 by a farmer digging a well in PEI. The farmer sold it to the Academy of Natural Sciences in Philadelphia where a paleontologist described it and named it Bathygnathus borealis, which means deep jaw from the North, and labeled it as a dinosaur.

“Back in 1845, they thought that it was a dinosaur because it looked a lot like the dinosaur fossils that were coming out of England,” said paleontologist Kirstin Brink, who helped identify the fossil correctly while conducting her PhD research at the University of Toronto. Brink is now postdoctoral researcher at UBC.

In 1905, a different group of paleontologists realized the fossil was actually from an animal family group called phenacodontids, a family group more closely related to mammals than to dinosaurs.

People in the scientific community did not know where to fit it in the family tree of the phenacodontids. Brink came to deal with this fossil by studying the shape of the phenacodontid family's teeth. Kirstin Brink went to Philadelphia to observe the fossil, which was later brought to Toronto and analyzed in a CT scanner to observe the shape and roots of the fossil's teeth closely.

Since the farmer who originally found the fossil did not mark where it was found, no other fossils have been found of the dimetrodon.

In the past, other scientists had the suspicion that the fossil was a dimetrodon, but it was only confirmed in the study that in 2015 also concluded that Bathygnathus is the same species as the dimetrodon but from different a different region of the world.