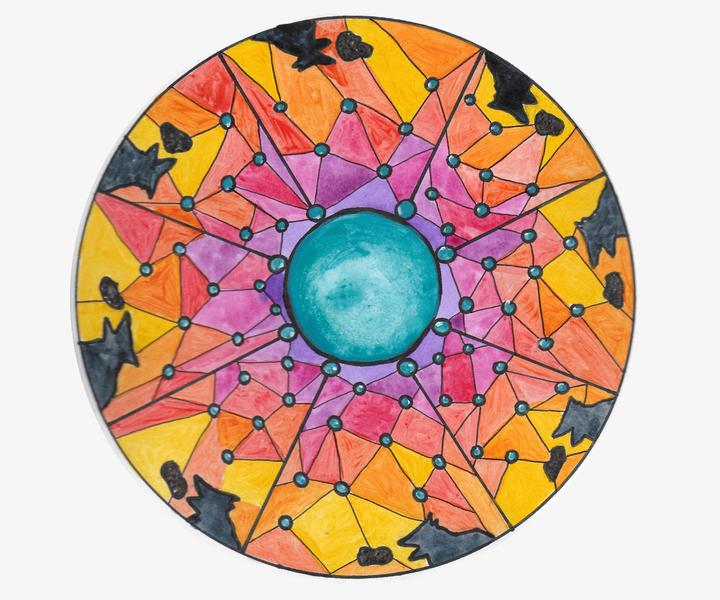 It was the smell that woke him up every time. The stale, warm, earthy, heavy smell — it reminded him of his days before the Church and his late nights in dingy mess halls, drinking until he passed out. The smell and the memories it carried always made the man wish it was the alarm bells that woke him. Even the cold would have been better.

He pushed open the hatch of his stasis pod and shivered as cold air rushed into the chamber. As his foot touched the cold, grated metal of the ships floor, he shivered and wiped the pod’s cold slime from his face.

He grabbed his blanket from the hook where he had left it before entering his long sleep. He wrapped it around himself to ward off the cold that penetrated the ship’s thick hull during the long jump between galaxies. He wished that the blanket warded off the smell.

Lights flickered on, and he shivered with pleasure as the vent above his head showered warm air down the back of the neck. He raised his face to the vent and enjoyed the fresh, stench-free air while it lasted. Soon it would have the same cheap beer smell as everything else on the ship.

This had been his longest sleep yet and the ship would need a lot of repairs, but they would have to wait. He closed the hatch to the stasis pod and shut off the power. He’d clean and reset it later — it would be a while before he entered it again, if he ever did.

He walked to his quarters to dress. He used to sniff each Cassock to find the one least permeated by the smell. He didn’t bother anymore, they’d all been soaked in it for too long.

With a tired sigh, he turned his quarter’s lights off and walked down the ship’s hallway. At the end was a heavy door with a large wheel in the middle and a small, glass window above it. The window, once painted and bright, was now as faded as the man approaching it. The smell became stronger as the man reached the door. The ship had warmed up, and he could feel it sitting heavy on his face and penetrating his nose. This many sleeps later, it still made him gag. The man slowly began spinning the wheel on the heavy door.

Has it always been this heavy? The man couldn’t tell if it was his or the ship’s age that made turning the door’s wheel so hard.

“Come in,” Grandfather called through the heavy wooden door to the young priest who had just knocked.

The priest had never been to Grandfather’s study before — almost no one had. He should have been excited — it was a great honour to be summoned — but he knew that wasn’t why he was there.

Grandfather sat behind a large wooden desk. Tall bookshelf covered in old, paper books spread from the large circular, stained glass window directly behind Grandfather. At the centre of the window, just above Grandfather’s head, sat a huge, perfectly spherical, blue­green gem. Spreading out in all directions were dozens of smaller gems, each was polished and had its own shade of blue­-green. Near the edges of the windows were small, unpolished and lumpy spheres — more unrefined rock than precious stone. Painted on the glass around these ugly lumps were hulking, shadowy creatures with wide mouths threatening to swallow the dark, unpolished rocks. In the late evening light, the central gem refracted light across the whole window into thin beams. The beam of light struck the smaller gems, and the blue and green spheres seemed to glow from the light. Some beams died on the unpolished surface of the black stones.

“Beautiful, isn’t it?” asked Grandfather, standing slowly from his desk, looking at the window. The young priest stood ashamed in the doorway. “The first time I saw it, I couldn’t speak either.” But the window was not the cause of the priest’s silence.

Grandfather chuckled as he turned to face the window. He pulled his arms behind his back as he looked through the window, down at the young men walking between buildings in the courtyard below.

“You must see the window up close to really appreciate it,” Grandfather beckoned, still looking at the courtyard below. “Come.”

The priest hesitantly enter the room, his gaze fixed on the floor, and slowly made his way to stand beside Grandfather. This was not the welcome he had expected. He had anticipated shouting, ripping the collar from his neck, banishing him from the Church. But the Grandfather was calm and quiet, the promise of a slight smile on his lips.

As the priest approached the window, he could see the black lead holding the the glass together all converged on the central gem and connected each of the smaller gems — even the ugly ones — to the central one.

“I joined the Church to make a difference on this world,” said Grandfather. “I spent no time thinking about our duties beyond Earth, I didn’t understand their importance. As I grow older, I find myself thinking more of these duties and less about our Earthly work.

Grandfather turned to face the young priest, their eyes connecting for the first time. Now the priest understood, he should have known all along. Punishment would not undo his actions. In his position, the priest knew there was only one answer to the question Grandfather was about to ask.

Grandfather smiled, placing his hand on the priest’s shoulder. He led the priest to sit down across from him at the desk and smiled.

“To fulfill His mission, we must sacrifice. To sacrifice for His mission is the only way to reach Salvation.”

Grandfather turned in his chair to look back at the grand window behind him. “Son, how would you like to receive this honour?”

The words of Grandfather were far from the priest’s mind as he checked the bioreactor — they’d been far from his mind for many sleeps. When he had first left, the priest had thought often of Salvation and if his sacrifice would be enough to reach it. Now the old priest’s thoughts were fixed on pushing the smell far from his mind. Getting away from it would be salvation enough.

The bioreactor sat in the middle of the room, leaving only a narrow space to walk beside it. Its green, foamy liquid glowed as it was stirred. The old man approached the small screen embedded in the window of the reactor and began clicking away. By now, it was an old routine: check the oxygen levels, check carbon inputters’ filter, refill the nucleotide sequencer, add in activator. The priest had done the same task after he woke from every sleep. It had been seared into his memory in the weeks after his meeting with Grandfather.

He had been taught how to keep the bioreactor running, how to maintain a ship, how to carefully transfer some of the bioreactor’s primordial soup and use it to seed black, unpolished planets. The priest had learned more about His mission in those few weeks than in all his time in the Church before.

The last step was to check the map. During the priest’s long intergalactic sleep, the ship had mapped his course until the next sleep. This galaxy was big, brimming with cold, black planets.

The first few times the priest woke, he had been eager to check the map — hoping to find Salvation. Now he just glanced to see how long it would be before his next sleep.

The bioreactor had replenished to full capacity, its primordial soupy innards ready for their long journey from the warm womb of the ship to the cold, rocky, dead planets of this galaxy.

A flashing red light on the bottom on the report blinked out at the priest — the ship was low on seeds. The old man’s first task would be to find an asteroid field to mine for new seeds to carry his precious cargo. With a final glance at the bioreactor’s screen, the priest stepped back into the hallway, closing the heavy door and clicking the wheel 12 times behind him. He was happy to be out of the worst of the smell.

He walked to the end of the hallway and climbed the steps to the bridge slowly — his legs were glad they were the only stairs on the ship — to take his first look through the window at the cold, lifeless galaxy before him.