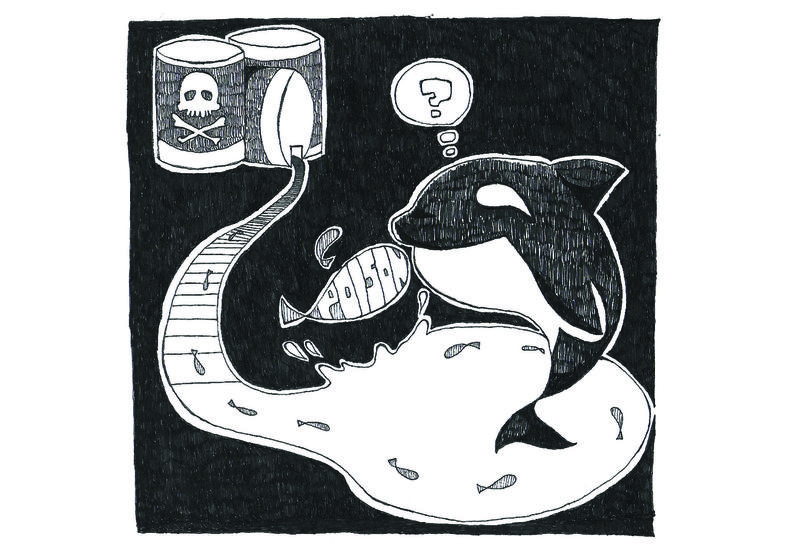 The southern resident killer whales are exposed to these pollutants not through direct contact with their environment, but through their diet of primarily Chinook salmon. Hinako Kaneyama

The situation of the Pacific Coast’s southern resident killer whales has been looking pretty bleak lately.

Orca J-35 mourned the death of her calf for 17 days last summer and more recently J-50 — a young female orca — was declared dead, reducing the population of the J pod from 75 to 74. Now, UBC researchers have found that these whales may be facing additional challenges if we don’t reduce our carbon dioxide (CO2) emissions.

Their study looked at the accumulation of two different pollutants, polychlorinated biphenyls (PCBs) and methyl mercury, as they travel through the southern resident killer whales’ food web. The results vary dramatically based on whether our CO2 emissions stay where they are — a “business as usual” scenario — or whether we make substantial efforts to reduce our CO2 emissions in the future.

PCBs are industrial chemicals that were used from the 1960s to the 1970s, when they were phased out because of their toxicity. Even though their use stopped decades ago, as the study’s lead author and postdoctoral research fellow at the Institute for the Oceans and Fisheries Dr. Juan Jose Alava explained, “PCBs are very persistent” and they cycle through the environment “like any other nutrients like nitrogen and phosphorus.” This means that they’ve stuck around the coast of British Columbia for quite some time and continue to contaminate fish such as Chinook salmon to this day.

The southern resident killer whales are exposed to these pollutants not through direct contact with their environment, but through their diet of primarily Chinook salmon. Not only are food nutrients absorbed in the stomachs of these salmon, but pollutants are absorbed as well. As killer whales continually eat these salmon, they are exposed to more pollutants, until eventually they become the most contaminated animal in their food web.

In fact, orcas from British Columbia are the most PCB-contaminated animals in the world, due in large part to the chemical’s significant historical usage around the BC coast as part of heavy industry.

The UBC study assessed how the accumulation of PCBs and methyl mercury in orcas would be exacerbated due to climate change by examining four factors: the temperature and acidity of the Salish Sea, changes in primary production — that is, the production of chemical energy at the base of the food web which consists of aquatic plants — and changes in dissolved oxygen.

A significant increase in these pollutants means endangering the immunity and reproductive ability of the southern resident killer whales. With only 74 of these whales left in BC waters, keeping these increases to a minimum is crucial for the health of the population.

With these findings in mind, Alava encouraged continued steps toward a lower-emission future like limiting red meat consumption and increasing the use of public transportation and hybrid cars. He also called upon the Canadian government to “reach the Paris agreement to reduce emissions,” as the country is currently behind its goal.

Only then can we have hope for the survival of the southern resident killer whales, an animal which Alava pointed out is a significant element of Indigenous cultures and the culture of the province as a whole.

“The orca are the icon of British Columbia.”