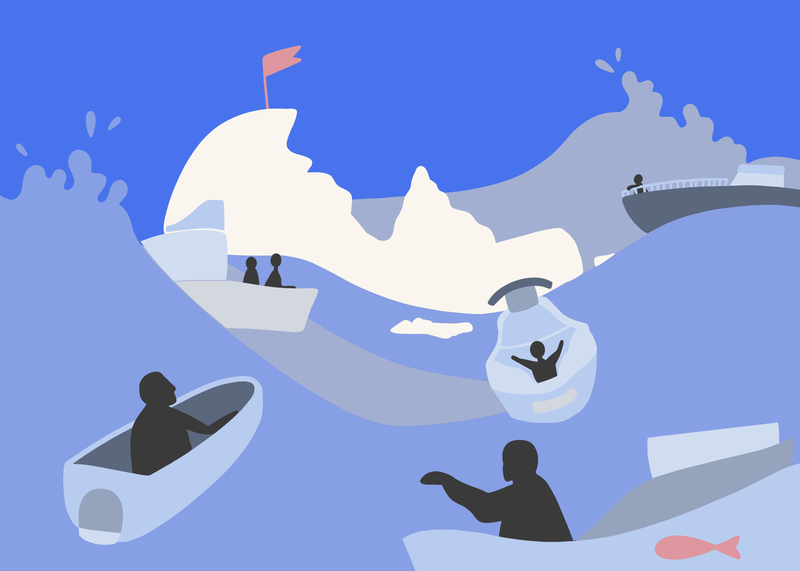 However, the biggest challenge facing ocean ecosystems is not acidification induced by the climate crisis, but overfishing. Maya Rodrigo-Abdi

With much of 2019 characterized by burning forests, storms and inland flooding, a team of UBC researchers hope to turn our attention to the challenges facing the other 70 per cent of our planet, our oceans.

The study — led by Dr. Travis Tai, a post-doctoral researcher at UBC’s Institute for the Oceans and Fisheries (IOF) — found that the climate crisis will increase fish stocks in the Canadian Arctic as rising temperatures drive populations from their sub-Arctic habitats into cooler, though also warming, Arctic waters.

The researchers modelled the average movement of 72 species of fish over time based on different climate crisis trajectories. The final results show net positive increases in catch in a high climate crisis scenario.

“Despite our analysis projecting this seemed increase and positive benefit [to fisheries catch], it isn’t necessarily a winner for our Arctic,” explained Tai, who stressed the importance of using a holistic framework, taking into account economic, environmental, social and cultural factors when considering commercialization.

The Arctic is also the location of an acidification hotspot that has rapidly spread in area and depth since the 1990s. It is currently acidifying twice as fast as rates observed in the Atlantic and Pacific oceans.

Though the study’s current projections show that more fish will move into the Arctic than those destroyed by ocean acidification, Dr. Rashid Sumaila, one of the study authors and director of the IOF Fisheries Economics Research Unit, explained this trend could reverse if acidification and temperatures continue to increase.

However, the biggest challenge facing ocean ecosystems is not acidification induced by the climate crisis, but overfishing.

Commercial fishing has depleted over two-thirds of the world’s fish populations. In Canada, only 35 per cent of known fish stock is considered healthy. Currently, most Canadian Arctic fisheries are run by Inuit and other Indigenous peoples, and are largely for subsistence and ceremonial purposes.

“Big commercial fishing is new to the area, so anything that we can do before hand, before this boat really comes, to protect this ecosystem will be very important,” said Sumaila.

“I think the opportunity [the Arctic] gives us, is for us to be more proactive and anticipatory than reactive to these struggles,” said Sumaila, recalling the collapse of the Canadian Atlantic Cod fisheries in 1992.

Despite early warnings from scientists, the combination of increased fishing quotas set by the government and the use of environmentally damaging technology like bottom trawlers by large commercial fisheries led to cod biomass falling to just one per cent of earlier levels and the collapse of the industry. Ultimately the crash resulted in the largest layoffs in Canadian history affecting over 30,000 people, and requiring $2 billion in federal aid.

“A fraction of that [amount of money] could have saved the country, but nobody had the guts to do it,” continued Sumaila.

Around the world, marine species are dying off at a rate faster than those on land. In a recent working paper published by Sumaila and Tai, the pair explained how overfishing weakens marine ecosystems, rendering them more vulnerable to the effects of the climate crisis and ultimately, preventing their recovery.

This September, almost two decades after the 1992 cod collapse, First Nations and commercial salmon fisheries have again called on the federal government for disaster aid after salmon populations in runs across the region plummeted, leading to the worst commercial fishing season in 50 years on the BC coast.

According to Dr. Kai Chan, a professor at the Institute for Resources, Environment and Sustainability, the first thing Canadians should be looking to the government for is a reform in their governance approach.

“We need to be able to trust that the government is going to truly investigate emerging risks that are associated with oceans and every other kind of ecosystem, and that they’re going to reveal that in a transparent way to civil society,” said Chan in a February interview.

“There’s no legitimate reason to trust that that’s happening right now, to be honest.”

According to Tai, scientists in academia and at the Department of Fisheries and Oceans (DFO) are all working towards a common goal of keeping fish stocks at sustainable levels, while also keeping people employed.

“But at times, I think that policies in government are still made independent of the scientific suggestions that we come up with,” said Tai.

The DFO’s lack of transparency and effective management of commercial activities have long been criticized by scientists and activists alike and many gaps still exist in the data such as the unknown health of almost 40 per cent of Canadian fish stock.

“What we’re dealing with is entirely around the perception of harm and the [fisheries] industry wanting to prevent any kind of legitimate conversation around the real magnitude of that harm by preventing any data from getting out there,” explained Chan.

‘It’s people who do things, who make things happen’

“There is a lot to do. The country is not the worst in the world, but its not at the place you would think is adequate,” said Sumaila in reference to Canada’s declining reputation for ocean conservation.

According to Sumaila, many scientists believe Canada has a chance to lead the world in sustainable fishing and conservation through how it manages the Arctic.

Among the many necessary changes are political and corporate shifts from short-term to long-term thinking, the adoption of ecosystem-based management and the acknowledgement of the value of traditional ecological knowledge in informing future research and policy.

“People need to be engaged here. What I realize more and more, for democracies at least, is the people ultimately get what they want” he said.

“We should all use our democratic rights to get the right people, because it is people who do things, who make things happen.”