Sci-fi: ‘Close Encounters of the Most Genuine Kind’ 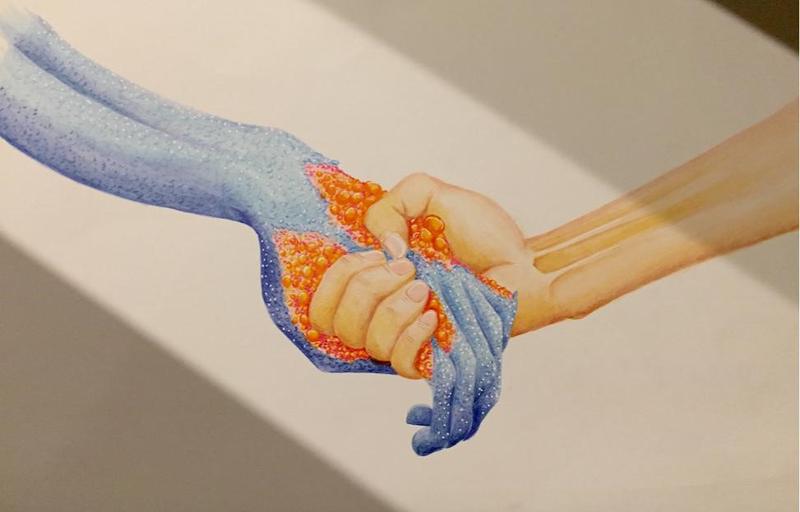 “Hey Kik, do you wanna hang out after this?”

I looked up from my data collection charts toward Raquel, sitting across from me and wearing twenty scanner patches on her skin. We were on the ship’s glossy science deck studying the human phenomenon of knuckle pops — specifically, how much time it took before Raquel could produce them again.

I blinked my peri-eyes. Hanging out is an important human bonding ritual. To be offered such an invitation was a surprise, even if I had been hoping for it ever since Raquel was assigned to my research team. Finally, the chance to experience the legendary genuine human connection. “I would like that very much,” I said, clicking my mouth as I tried to imitate a smile.

She cracked her knuckles again as I scrambled to stop the timer. Standing up, she stretched her arms high then twisted to either side. An alarming series of pops sounded from joints throughout her entire body.

I shivered in sympathy and began entering this fascinating new data.

We headed down to Raquel’s quarters and soon were sitting side-by-side on her human-style bed watching projections provided in honour of Netflix, humanity’s prime deity. Raquel picked her favourite — “Grey’s season 76. The writing really went downhill after that,” she told me — and out of respect for her beliefs I refrained from pointing out the many inconsistencies in the narrative.

As a doctor used a needle to draw blood, Raquel shivered beside me. “Ugh,” she muttered.

“Why?” I blinked my peri-eyes. Were we approaching the stage known as unlocking the tragic backstory? I was unprepared.

Raquel grimaced. “I mean, a piece of yourself is getting sucked” — she made a pulling motion with her hand — “out of your body to be locked up in a med vault somewhere. That bit could exist even longer than you’d live.”

I hesitated, half puzzled and half relieved. No tragic backstory, but philosophical discussion?

“Plus,” she continued, “needles hurt.”

Raquel laughed and gently smacked my side with her hand. “That’s a good way to put it,” she said, leaning forward to bring Grey’s back on.

Casual contact! Used in human society to indicate a level of comfort between individuals. Not quite as good as tragic backstory, but significant nonetheless. A happy tingle started on my skin where Raquel’s hand had been.

As we settled back to continue watching, the tingling didn’t subside. I shifted minutely, trying not to disturb Raquel, but the sensation kept building. It was like shedding baby scales, only hotter. So much hotter.

I scratched and felt the scales shift oddly. Raquel turned toward me. “Kik, you alright? We can change it if you’re bore—”

She stopped and stared down at my side. I followed her gaze. My skin was bubbling, buckling the scales on top of it. Where I had scratched they were torn out by the roots, leaving clear fluid seeping from half a dozen pinpricks. Raquel looked up at me, eyes wide.

I sprang up, holding the affected scales. “I have to go,” I said, and ran. Raquel’s voice and the thundering of the her heavy human footwear followed close behind. I ignored her, concentrating on the spreading burning in my skin. Breathing was becoming difficult. My steps were weaving. Raquel caught up to me and slung an arm around my body, supporting me as we hurried down the sparse hallway.

The med-bay greeted us with glaring whiteness. The floors, the walls, equipment, even the uniforms of the medical staff assaulted my peri-eyes. As we staggered through the doors a handful of humans and med-ling staff rushed forward, lifting me over to an examination table, where I sat, swaying.

Raquel approached one of the med-lings. “I don’t know what happened, he just — I think he had a reaction to something?”

The med-ling swivelled two peri-eyes toward me. I pulled my hand away to show the affected skin. A smattering of scales came with it, clinking onto the table.

The med-ling snapped her eyes back toward Raquel. “Get everything he could have touched. Bring it here. Be fast.” Raquel nodded and bolted back down the hall. The med-ling turned to me. “You, lie down.”

I’m not certain if I complied or if I simply collapsed.

When I woke my skin was cool and a soft tickling spread over my side. The med-ling crouched beside me, spraying bandage fluff over my raw skin. Raquel stood a short distance away. She gave me a smile, different from her usual one. Tighter, somehow.

The med-ling finished applying the bandage. “What is wrong with me?” I asked. “We did tests. You had an allergic reaction to the human.” She turned away, replacing equipment. “It was serious. I recommend abstaining from contact in the future.”

I lowered my gaze. Of course. It was too good to last.

Raquel stepped forward. “What? There’s got to be a medicine or something.”

The med-ling blinked. “We have no such medicine. Besides, he is only a minor crew-ling. He is not required to be around humans.”

The med-ling swivelled one peri-eye down to me. “He is under-qualified and replaceable.”

I closed my main eyes. Replaceable.

Raquel gritted her teeth. “We have to try something!”

The med-ling finished tidying. “I will send one of the human doctors to look at him if you want to pursue this.”

Raquel nodded crisply. She pulled over a chair and sat beside me without speaking as the med-ling bustled away. I reached out and tugged her sleeve. “Raquel, it is not your fault.”

She grimaced. “It is though! I did this to you—”

“Our incompatible biologies did this to me.”

“Raquel, do not trouble yourself. I am not worth it. Like the med-ling said — replaceable.” I looked away with my main eyes and dropped her sleeve. “Someone else will be assigned to work with you. We will not see each other again and I will be okay.”

“Kik, no,” she began, but halted as a human wearing a white coat and a big smile approached us.

Her smile stretched. “Good to meet you. I have good news and not-as-good news.” I blinked. “Continue.”

“The good news is that humanity is the galaxy’s most perfect irritant— plenty of species have reactions to us, so we’re well-versed in treating it. The not-as-good news is that you’re the first of your species to be affected, so we don’t have a cure for you yet.”

Raquel reached out towards me, then pulled her hand back with a twitch. “But you can find one, right?” She said.

“We can begin working on it right away. We’ll need samples of the irritant, though.” Raquel stood, pulling nervously at her sleeves. “Oh, um, I brought everything from my room. I’ll go—”

Dr. Gallaugher held up a hand. “No no, I mean samples of you. Blood, hair, saliva, possibly marrow and vitreous humour too.”

I looked up at Raquel. She was very still, her gaze fixed on the floor. I scrunched my main eyes shut. I could not ask her to do this for me. I knew her fear. I couldn’t — wouldn’t — make her give up so much of herself for me. “Raquel…”

She ignored me, looking up at Dr. Gallaugher. “Can we start now?”

“Raquel!” I grabbed her sleeve and pulled, jerking her down to me. “You do not have to do this.”

“Kik,” she said, looked directly into my main eyes. “You are my best friend on this ship. I am going to do this, and if that means needles…” she shivered but didn’t falter, “Then fine. Just let me help you, please.”

I turned all my eyes to her. “You are sure?”

I released her sleeve. She straightened and turned to the doctor. “Alright. Just hurry up.”

Raquel lay on the examination table beside mine as the doctor gathered tools from supply stations. At the sight of the needles I heard Raquel’s breath hitch. I looked over. Her eyes were wide and her breathing was shallow. Dr. Gallaugher held up the first needle. “You ready?” Raquel shut her eyes and nodded.

I reached across the divide between our beds and grabbed Raquel’s bare hand. Her eyes snapped open and she looked at me in horror. “Kik! You can’t!”

“You are my best friend on this ship too,” I said, already feel the tingling under my skin. “So we are going to help each other.”

Raquel hesitated, then squeezed my hand gently. “Thank you,” she whispered. I squeezed back.