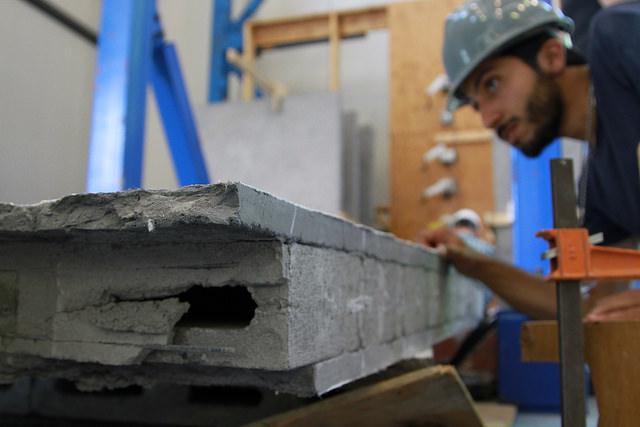 With the threat of “The Big One” present in the minds of people in the lower mainland, it comes as no surprise that researchers are looking for various retrofitting options for at-risk buildings.

The concrete compound developed by Banthia and Soleimani-Dashtaki is called eco-friendly ductile cementitious composite (EDCC). The compound is more eco-friendly than other types of concrete due to the amount of cement used.

Cement production is a highly polluting industry because there is a one-to-one ratio between cement and carbon dioxide production — when one tonne of cement is produced, one tonne of carbon dioxide is also produced. Banthia and Soleimani-Dashtaki were able to reduce the amount of cement to 30 per cent of what is commonly used by replacing cement with industrial byproducts such as fly ash, silica fume from silicon production and slag from metal refinement.

Fly ash is a byproduct from coal burning industries and, more often than not, will be unsustainably disposed of. The byproduct will usually be taken to landfills where it will create an alkaline environment that is unsuitable for many organisms.

By replacing 70 per cent of the cement used in the EDCC compound with fly ash, less fly ash will remain in landfills.

“Fly ash is actually one of the best materials you can supplement cement with. They go very well together and you can easily replace a big chunk of this [cement],” said Soleimani-Dashtaki.

To adjust for deformation, the material should be flexible, which Banthia and Soleimani-Dashtaki achieved with the addition of polymer-based fibres to the compound. Modelled after steel, the compound contains fibres of various lengths, which allow the compound to bend during an earthquake rather than fracturing.

To test the concrete compound, the researchers had ten walls undergo a simulated earthquake scenario. Four of the walls were tested without retrofitting and six with either single, or double sided retrofitting with the compound. They would then scale the intensity of the simulation to an earthquake in a particular target city — Tohoku city in Japan for example — and continue to raise the intensity until the wall collapsed.

The retrofitted walls were able to withstand a simulation of the Tohoku, Japan magnitude 9.0-9.1 earthquake that occurred in March 2017. They were also able to withstand earthquakes scaled to intensities higher than those estimated for Victoria and Vancouver, with some not breaking until a non-earthquake motion was applied.

The compound can be applied using a spray-on technique to form a thin layer on interior walls.

In particular, the compound is targeted for non-load bearing partitioning walls often used in commercial buildings. The hollow blocks are beneficial for sound and heat insulation, but do not provide stability to the overall structure. Although the partitions are easy to build, they become a hazard during an earthquake because they collapse and create debris.

“Those typical walls, usually about 80 to 90 per cent of the time, get completely removed and replaced with different partitioning systems like metal stalls and drywall,” said Soleimani-Dashtaki.

By using the spray-on EDCC compound to retrofit walls instead of full replacement, costs for repairs are lowered and the amount of waste created is minimized.

“I’m not really sure about how it works, but obviously it would be good — it would save a lot of money for repairs and prevent loss of life,” said Daniela Martin, a third year civil engineering student.

As a demonstration of the applicability of the compound, Banthia and Soleimani-Dashtaki are working with structural engineers to implement EDCC in the Dr. Annie B. Jamieson elementary school in Vancouver and another school in India.

The compound has now been included in the third edition of the Seismic Upgrade Guidelines as an available option for masonry. With such recognition and cost effectiveness, the compound will be able to become a more viable option for countries across the world, including at-risk buildings in developing areas.

A previous version of this article used cement and concrete interchangeably. The Ubyssey regrets this error.