Newest addition at Pacific Museum of Earth is Elasmosaurus skeleton 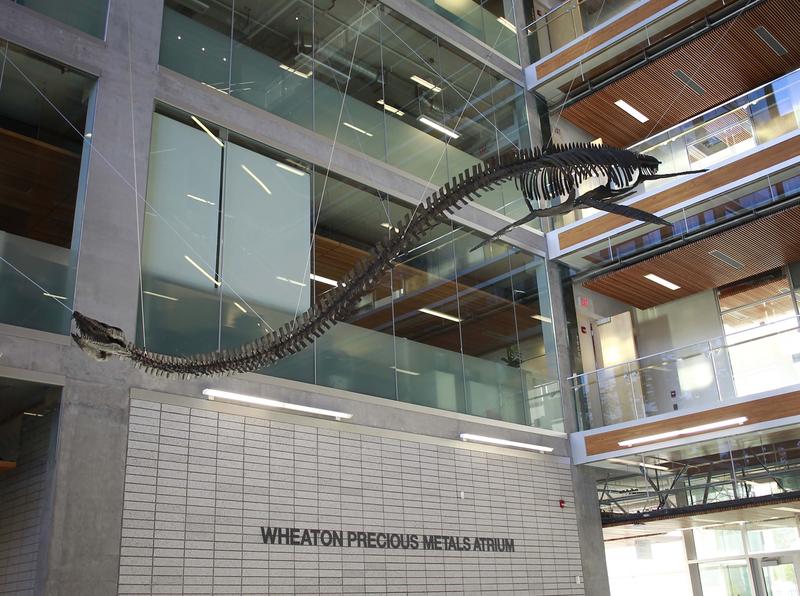 The Elasmosaurus is the first of several new exhibits going up in the year ahead. James Vogl

Just in time for the Halloween season, UBC’s Pacific Museum of Earth (PME) has acquired a 42-foot long cast skeleton of an ancient marine reptile to adorn its atrium: an Elasmosaurus. The Elasmosaurus’ origins, however, are more sensible than spooky. Its journey to the PME became possible due to the past and continuing efforts of a community of scientists and supporters.

“This is a pretty big deal for the museum,” said the director of the PME, Dr. Kirsten Hodge. She explained in a press release that “big” was a literal assessment. The museum could have gone with a local skeleton that was about 10 feet shorter, but decided on this Elasmosaurus because the skeleton would fill the space better.

The Elasmosaurus is the first of several new exhibits going up in the year ahead, meant to improve the PME’s science communication and education. According to Hodge, the Elasmosaurus exhibit, as well as the other upcoming installations, are intended to provide “a lot more participatory, hands-on learning in the museum.”

“For now we’re going to add some static content to the space, but we’re [also] envisioning a kiosk that has some interactive digital components,” she said. In a press release, she wrote that she hopes the exhibit will “ignite a sense of amazement and curiosity in visitors as they imagine this majestic sea creature swimming through a Cretaceous sea.”

Edward Drinker Cope identified the ancient marine reptile as an Elasmosaurus (not a dinosaur, though it lived at the same time) in 1868, but he incorrectly drew the head atop the tail, rather than the neck. This mispositioning became part of a bitter, decades-long rivalry in the paleontology community known as the “Bone Wars,” wherein Cope and opposing scientist Othniel Charles Marsh publicly shamed each other, sabotaged one another’s work and argued over everything from taxonomy to anatomy. Less serious were the more recent debates over a nickname for the PME’s newest addition.

“It’s not official,” said Hodge. “But we want to call [the Elasmosaurus] ‘Dorothy,’ because it’s originally from Kansas.”