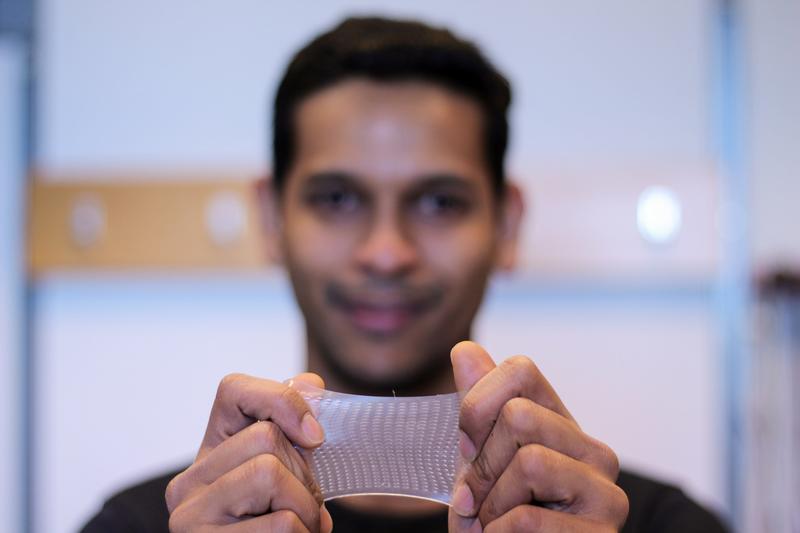 If you’ve had the experience of frantically tapping on a computer screen, perplexed at why it won’t respond, only to shamefully discover it’s not a touchscreen, you probably have a keen appreciation for just how ubiquitous the technology has become. Even if you haven’t inadvertently used someone else’s screen to make abstract art out of your fingerprints, it’s not hard to see that touchscreens are everywhere.

From the phone you may be reading this on to the new ordering stations at McDonald's, you’d be hard-pressed to go a day without seeing a touchscreen. A group of UBC researchers, led by PhD student Mirza Saquib Sarwar and assisted by UBC professor of applied science Dr.  John Madden, are pushing the boundaries of the technology.

The group has been working on the development of flexible touch sensors and their latest prototype, described by Sarwar in a recent paper, can detect touch while being bent or even stretched.

Made of three sheets of silicone (the same stuff they make rubber oven mitts out of), the device works through a process called mutual capacitance, as explained by team member and fifth-year electrical engineering student Justin Wyss at the recent Multi-Disciplinary Undergraduate Research Conference.

If I didn’t lose you at mutual capacitance, stick with me here. It might sound daunting to those who aren’t electrical engineers, but the basic idea is actually pretty easy to make sense of. If this arts student can do it, so can you.

As the name might suggest, mutual capacitance relies on capacitors, which are devices that store energy using an electric field. This field is generated between two electrodes separated by an insulator (something electricity can’t flow through). The capacitors are then arranged in a grid, with each one producing a small electric field coming out of the surface of the sensor.

As you bring your finger closer to the sensor, it becomes a third electrode because it is conductive, changing the electric field created by the capacitor and reducing the amount of energy it can store.

It’s a little like the way spiders detect prey in their webs, but instead of distortions in the strands of a webs, mutual capacitance relies on detecting distortions in electrical fields to sense touch.

Bending or stretching the sensor has a similar effect that the proximity of a finger does except it increases, not decreases, the amount of energy it can store.

The device that Sarwar and his team have created uses a four-by-four grid of electrodes to create an array of 16 capacitors. To create the electrodes, conductive hydrogels developed by Harvard researchers were injected in lines into both outer sheets of silicone to create a row and column arrangement.

Wherever the rows and columns overlap, the two electrodes separated by the insulating third layer of silicone in the middle create a mini-capacitor which gives rise to an electric field.

According to Madden, going forward, the team intends to start focusing on exploring potential applications of the technology, developing the capability to detect multi-finger gestures and resolving some lingering technical challenges like preventing the evaporation of the conductive hydrogels that make up the electrodes.

There are many possible uses for flexible touch sensors, but the technology is so new that many ideas haven’t been fully fleshed out yet.

“It still remains to be seen what those devices will be and whether people will adopt them or not, but it’s an enabling technology that lets us to go in that direction,” he said.

One area in which the team thinks they could be particularly useful is industry. Robots are heavily utilized in industrial processes, but can pose a collision hazard to humans who occupy the same workspace. With this new sensor technology, artificial skins could be developed that would be able to detect the presence of a human before a collision, allowing for closer integration of people and machines in the workplace.

Another potential use for these new sensors could be in hospitals and nursing homes. Since the device is so inexpensive to manufacture on a large scale (as little as $1 per square metre), large sheets of it could be laid down on floors to monitor the movement of patients or residents by tracking their footsteps or alert staff to a fall.

While the team is unsure of exactly how the technology will ultimately be applied, they are excited to continue refining their prototype and expanding the horizons of what is possible with touch-sensing technology.