Girls-only Maker Camp pushes back at cultural assumptions of coding, creating and inventing

In 2015, the faculty of applied science announced its goal to achieve gender parity in the engineering program by 2020.

Gender inequity in science, technology, engineering and mathematics (STEM) has long been an issue at universities and beyond. The “leaky pipeline” has been used as a metaphor for women who leave STEM fields, partly because of gender-related bias and barriers.

In a society where cultural attitudes and stereotypes can impact women’s STEM career paths, how do we keep girls interested in pursuing STEM?

This past July, UBC and Michael Smith Laboratories hosted the fourth annual Maker Camp, which brought together 24 girls entering grades seven and eight to take part in everything from Arduino coding to craftivism.

The camp is unique and not just because it introduces girls to maker spaces — something they wouldn’t normally be able to access. While the girls benefited from the tools, resources and mentorship at the camp, they were also taking part in a research project as both co-researchers and subjects.

Dr. Paula MacDowell, a postdoctoral fellow in the faculty of education, followed the girls over the course of the camp to research the impact of girls-only maker programs. MacDowell’s research is a continuation of her study of last year’s camp, which she views as vital to understanding girls’ learning in STEM.

MacDowell looked at what and how the girls learned, going beyond the cognitive learning process to explore the meaning and identity-making that took place during the camp. She wanted to know if the girls were connecting with the activities, not as passive participants but as active creators.

Equipped with HD cameras and a list of research questions, the girls interviewed each other in pairs on two separate days. MacDowell collected data from the interviews and answers to questions like, “what was the hardest thing about learning to code Arduino?”. The campers were also encouraged to ask their own questions. 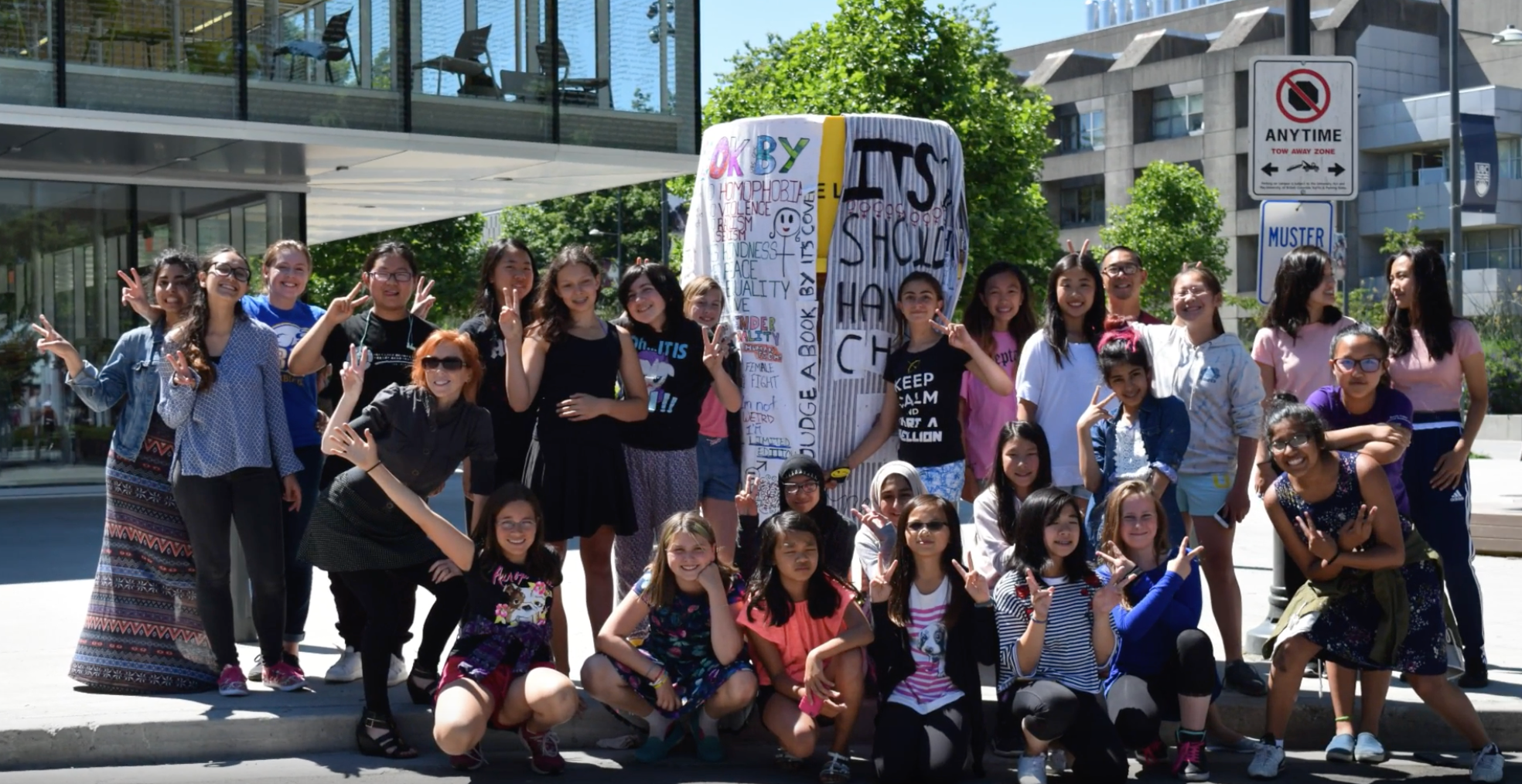 The 24 girls who participated in this year’s Maker Camp pose with their craftivism project. Kim Werker

The study of equity programs like Maker Camp is an important step toward changing the outlook for girls entering STEM fields, according to MacDowell.

“We can’t learn what we don’t measure. Unless we start to change how girls learn in school or these outreach camps, we won’t have different outcomes for women in STEM,” she said.

MacDowell will compare this year’s findings to her previous study. She also hopes to continue the work long-term.

“Generally speaking, some of the most powerful findings are that girls are not having these opportunities [to pursue STEM] at school or out of school,” she said.

MacDowell also realized that other STEM camps on campus were almost always filled up first by boys. “I think that some of the girls here are a bit hesitant at the beginning of camp but by the end of it they just really love it,” she said.

MacDowell discovered that creating girls-only maker spaces encouraged them to pursue their STEM interests instead of intimidating them. Using the right terminology, like maker camp instead of hacker camp, proved to be more inclusive as it eliminated the baggage that causes some women and girls to dis-identify with a masculine driven technology culture.

Girls are often more susceptible to cultural stereotypes about women in STEM and making in general, MacDowell observed. Kim Werker’s ugly doll workshop challenged the girls to make something ugly, pushing back at “cultural associations and assumptions about making.”

The campers also brainstormed their own craftivism project, which involved decorating four fabric panels to the theme of inequity and injustices that girls face. The panels were fixed to the UBC free library, which they filled with books on social justice and equality.

Four fabric panels — spelling out “don't judge a book by its cover” — were fixed to the UBC free library outside of Michael Smith Labs. David Ng

MacDowell was inspired by the passion and enthusiasm the girls carried into their roles.

“As they’re building their Rube Goldberg machines, they’ll write [the date and time of testing] in their little books because that is what engineers do — the writing, the documenting, the testing. They actually take this reflective stance and are systematically engaging as engineers as they follow these steps. That is very inspiring and motivating to see,” she said.

She believes collaboration is key to closing the gender gap for women in STEM, as well as more equity oriented camps and research.

“All kids need opportunities and deserve more opportunities to be the coders, creators and inventors of the media and technology that make our world,” said MacDowell.