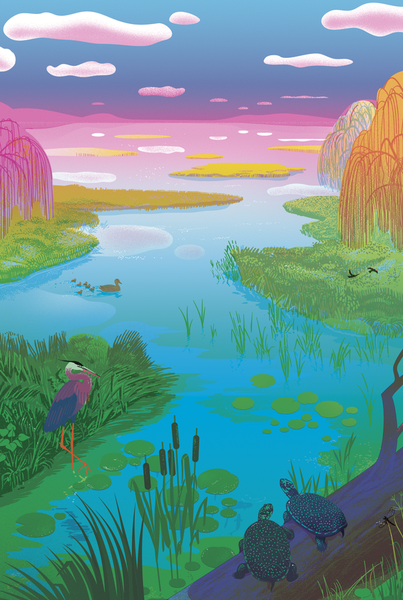 “Biodiversity really represents the natural world as a whole.” Courtesy Stéphane Poirier/Microfiches, the Natural Sciences and Engineering Research Council of Canada and the Canadian Wildlife Federation

Science Literacy Week, which runs from September 21–27, is an opportunity for Canadian research to be showcased and celebrated. Researchers under the umbrella of biodiversity — this year’s keystone theme — often find that their work transcends the typical lab experience.

Grey whales, land use and sucking up insects with a Ghostbuster backpack are a snapshot of the topics we encountered as The Ubyssey spoke to UBC graduate students about this year’s theme.

Graduate student Lauren Smith of the department of geography spent her summer wearing a modified vacuum pump mounted on a backpack frame. With the long tube sprouting from it, collecting herbivorous insects for her thesis project, she felt like a Ghostbuster.

“Biodiversity really represents the natural world as a whole,” she said. Smith explained that insects are foundational to many ecosystems, as they bridge the transfer of nutrients and energy from plants to higher in the food chain.

“I guess if you think about biodiversity from my project’s perspective, that aspect would come in with their prey,” Agbayani said. “Grey whales are really special in that they scoop up mud and eat whatever invertebrates are in the mud, but they are also able to feed on some of the bottom pelagic, swimming invertebrates as well.

“In terms of biodiversity, it is super important that there is enough prey for them — that there’s a variety of prey in case certain prey sources become inaccessible.”

Adrian Dwiputra is a master’s student studying human-induced landscape change, which is a major source of biodiversity loss. He added that the concept of biodiversity has broader applications for humans as well.

At its core, Science Literacy Week is an opportunity for students to get passionate about topics that are intimately tied to the world around them.

“It's not just biodiversity for the sake of those species existing but also the functions that they serve,” said Agbayani. Aside from an organism’s ecological purpose, the cultural significance — particularly among Indigenous peoples — of certain species adds to the importance of their preservation, explained Agbayani.

Understanding and respecting biodiversity is especially important in the wake of the climate crisis.

“The very short answer is that humans cannot survive unto this day without biodiversity,” said Dwiptura. “For example, we need our food [and] our important medicine, from biodiversity.”

Though he recognized the utilitarian aspect of biodiversity, he stressed a deeper outlook.

“The other thing that I hope UBC students can appreciate is that biodiversity — the species, the different genes within the species — they all have their intrinsic value. They have life.”