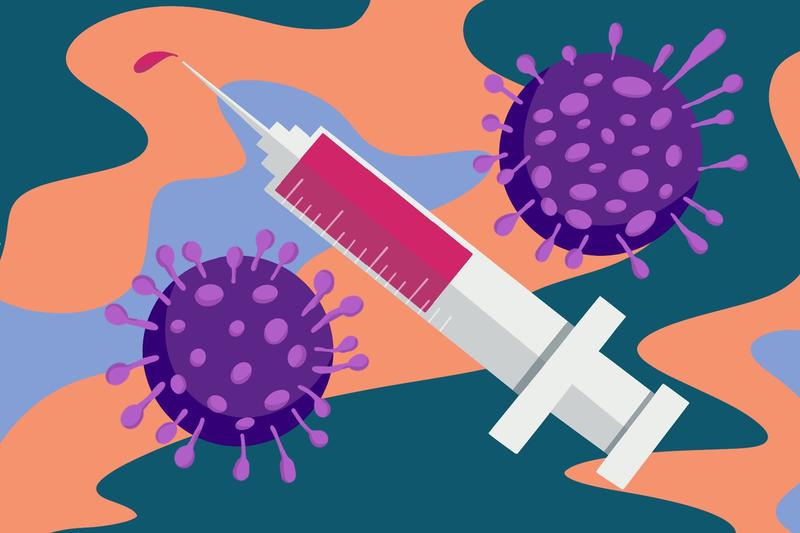 “Your fighter cells are primed. They know what they are looking for.” Lua Presidio

As vaccines become accessible to college-aged residents through BC’s COVID-19 immunization plan, the insight from UBC experts regarding these so-called “game-changer” mRNA vaccines merits an introduction — we figured we would give it a shot.

Start with the instructions

A little bit of biochem 101: mRNA vaccines inject messenger ribonucleic acid (mRNA) into the body. mRNA is a molecule that provides cells with the instructions to produce proteins, hence why it’s known as a messenger.

In the Moderna and Pfizer-BioNTech vaccines, mRNA prompts cells to produce the SARS-CoV-2 spike protein, which is found on the surface of the virus causing COVID-19 and helps the virus cling to human cells.

“With an RNA vaccine, what we are doing is giving the body an instruction manual and saying ‘Actually, you read this, you make the proteins yourself,’” Dr. Manish Sadarangani, director of the Vaccine Evaluation Center at BC Children’s Hospital and professor in the department of infectious diseases, explained in an interview with Global News.

Once the protein is made, immune cells degrade the instructions (mRNA) and display a piece of the spike protein on their surface. The immune system then recognizes the protein as foreign, leading to an immune response and the production of antibodies. Now, the body is ready for a counterstrike in the event of reexposure with the protein (and the virus that it is attached to).

“Your fighter cells are primed,” said Sadarangani. “They know what they are looking for.”

mRNA vaccines are considered a type of gene therapy as they utilize genetic material like RNA to induce an immune response in the vaccinated subject. Beyond mRNA vaccines, there are more traditional gene therapies that have been studied.

So, why break tradition? The Ubyssey attended a Life Sciences Institute seminar on January 15, 2021 featuring Dr. Pieter Cullis, a professor in the department of biochemistry and molecular biology and CEO of Nanomedicines Innovation Network. A UBC researcher whose work, according to CBC News, “paved the way” for the Pfizer-BioNTech and Moderna vaccines, Cullis explained the distinction between traditional gene therapies and the recent developments applied in mRNA vaccines.

Some background: traditional viral vector-based vaccines, in contrast to mRNA vaccines, work by injecting a harmless, engineered virus, typically of the adeno-associated virus (AAV) family, into the host. This AAV introduces genetic material specific to a protein of interest, which the host’s cells then make — in theory, spike proteins could also be manufactured in this way. The Oxford-AstraZeneca and the Johnson & Johnson vaccines take advantage of this technology.

Cullis noted that traditional viral vector-based vaccines have their share of limitations.

“Viral vectors have really proven to be very problematic. They have limited [genetic] capacity... [and] they are difficult to engineer and manufacture,” he said, regarding some of the problems viral vectors face. “Non-viral [mRNA] systems potentially have none of those issues.”

But mRNA vaccines are not free of limitations either. The mRNA used in both the Moderna and Pfizer-BioNTech vaccines is easily degraded in biological environments. Thus, it requires a carrier for protection and adequate penetration into target cells. This drawback is addressed with the use of lipid nanoparticle (LNP) delivery systems.

By packing the mRNA in lipid nanoparticles, not only is the mRNA protected but delivery into cells is made easier. The use of LNP systems may be new, with the first drug using LNP being approved by the FDA in 2018, but it is a feature critical to the function of mRNA vaccines.

In his presentation, Cullis acknowledged the collaborative efforts between himself and his colleagues Dr. Mick Hope, Dr. Tom Madden, Dr. Lawrence Mayer and Dr. Marcel Bally. Together, this team laid the groundwork for mRNA vaccine technology when they began developing LNP systems that could deliver DNA and RNA molecules in the 1990s.

In a recent interview with the CBC, Cullis discussed benefits of mRNA vaccines.

“It’s a really elegant approach. You’re not putting the whole virus in. It’s only a very small segment,” said Cullis. “There’s no chance of viral transmission or anything like that.”

Beyond vaccinating the public, Cullis highlighted in the interview that gene therapy is applicable in many areas of healthcare.

“It’s a vaccination technique that I think we’re going to see coming in quite a variety of other applications,” said Cullis. “Everything from influenza to HIV, cancer vaccines, etc. So it’s a very powerful approach to vaccination.”

Both Moderna and Pfizer-BioNTech’s mRNA vaccines were approved “after a thorough, independent review of the evidence” on stringent safety, efficacy and quality requirements, said Health Canada.

Under normal circumstances, it can take years for a vaccine to be approved in Canada.

According to the Ontario Ministry of Health, COVID-19 vaccines were made available to the public on a faster timescale due to an “expedited” approval process, made possible by reduced time delays, international research collaborations, increased funding and rapid recruitment of patients for clinical trials.

“We’re in the pandemic and time is not on our side,” Sadarangani said. “So we need something that we can get out into the population as quickly as possible.”

This is where mRNA vaccines come into the mix. Sadarangani explained that the application of mRNA vaccine technology in itself can facilitate faster introduction into clinical trials.

“The fact that we don’t have to do all the work in the lab to create the proteins … [and we can] just give the body the manual [mRNA], means that you can get this vaccine into clinical trials much much quicker,” said Sadarangani.

The appearance of a series of new strains of SARS-CoV-2 has highlighted the importance of a vaccine that is both efficacious and adaptable — as Sadarangani explained, our little instruction manual touting mRNA vaccines fit the bill.

Giving it a shot

For students interested in giving the Moderna or Pfizer-BioNTech vaccine a shot, they can register online on the BC Immunization Plan website using their Personal Health Number, which can be found on the back of your BC Driver’s License, BC Services Card or CareCard. Students who do not have a Personal Health Number can get one by phone at 1.833.838.2323.

According to the BC Immunization Plan website, “It doesn’t matter if you are a Canadian citizen or not. Register even if you have already received dose 1 in another location. All of your information will be kept private and will never be shared with other agencies or parts of [the] government.”

From March 29 to August 2021, the Pharmaceutical Sciences Building at 2405 Westbrook Mall will act as an on-campus vaccination clinic. Around eight weeks after your first shot, you can expect to get an invitation to book your second dose.

Students can refer to the BC Immunization Plan website, the BCCDC or peer-reviewed journals (like Nature and Frontiers) to further educate themselves about getting vaccinated and potentially making the choice to join the ranks of Canadians who are living that vaxxed life.