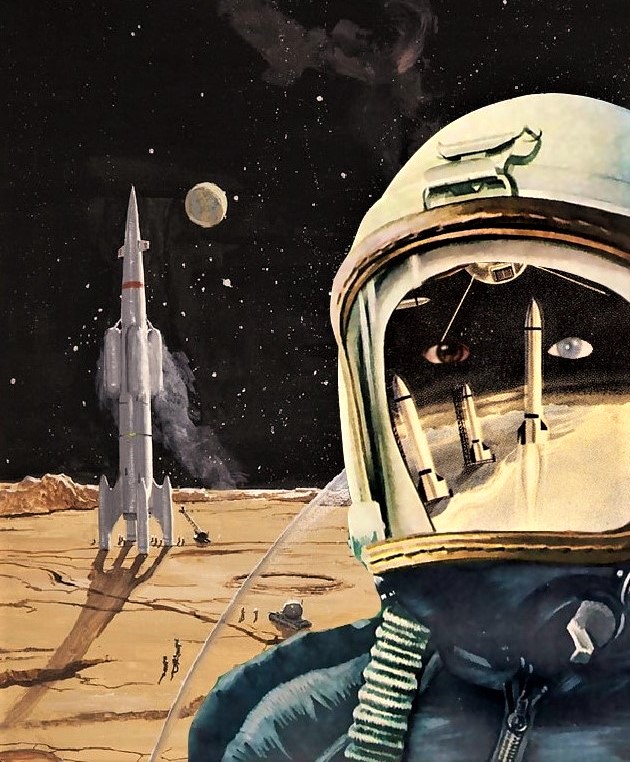 “According to this law ... the greater the distance of a galaxy, the faster it recedes.” Encyclopedia Britannica

There was one happy week during which we revelled in the almost unfathomable figure included in your salary package. Then, the arguments over your future started.

It was essentially the same fight we’d been having since you decided to go to university. To me, your idealism was taxing — applying to be an astronaut, of all the fanciful jobs. What was wrong with your job at the grocery store?

I was tired of being the only person to make sensible decisions that prioritized survival over lofty, half-considered ambitions. You would cost us the tentative stability the remnants our family had finally managed to scrape together after losing Mom and Dad. Once you were gone, what would a household be with only one person in it?

You argued that Mission Control said the mission was only contracted to last ten years, but given the well-televised failures of the last few space missions, I had my doubts. I began to suspect that you only got the position because you’d been the most emotionally well-adjusted person to sign up for a life-threatening shuttle to a cold, uninhabitable rock.

And your body would change. Your recruiting agent talked around this in the vaguest of terms, about how they would “optimize” you for survival in space. I was alarmed; you were barely concerned, and almost excited. It felt like a personal insult, how eager you were to leave me behind. I wondered if you would have listened if Mom had asked you to stay.

I didn’t want the government’s blood money. But in the end, I don’t think there was anything I could have said to keep you home.

You pinged my phone with your new number four weeks after leaving and warned that messages would take a while to get to me. I wondered about the optimization injections, but felt that your abrupt departure signalled some shift in our relationship that I didn’t completely understand. Would asking be off limits? Were we still on good terms? Was I supposed to say something about the way you left, without a note or a goodbye?

I wanted to deal with the topic of your leaving even less, so I asked about the injections.

An hour later: I scored a little higher on the vision metrics today. But I don’t feel much of anything yet. If something’s changed, I don’t know what it used to be like.

I’m worried about you.

Don’t be.
I’m serious
I’ve never not dreamed of this.

Ten years, on the dot.
And maybe there’s a future there
but it’s never been mine.
You know the Earth is dying
at the rate we’re going, the future doesn’t have much longevity
That’s why we’re taking such a long shot at a distant planet
Humanity deserves a second future.

well how many of us do you think are actually going to make it up there? in the end?
how many ships are you content to burn until you remember there’s a planet here to hold on to?

This will be the last one
The mission is going to work.

you can’t know that

A second home is worth the risk

But now we get new ones
To go with the old

In March, I watched you leave for space on my phone. Your face already felt different: harder, and brighter, at the same time. The screen was so tiny, I couldn’t tell whether I was imagining it.

Something’s different today. I think it’s bad.
I guess I’m not sure, actually
but I’m different. I feel different.
It’s a little exciting, but I’m worried
about who I’ll be at the end of this.
I never wondered before
If everything about me is built to be on Earth

And I’m rebuilt to be something else
that lives somewhere else
what does that make me?

slow down
tell me what happened

I really want to
but I don’t think I should
It’s too much for me to process, let alone
Anyway I have to go, talk to you soon

you’re scaring me.
we’re going to have a long talk about this in three years
when you get home

I wondered what it was you were hiding about your body. Was it cosmetic, was it physical, was there something different in your brain? I peered into the small and dusty mirror above our bathroom sink, trying to remember your face mapped above my own. But you never really looked that much like me. Our old joke about what bad twins we made wasn’t particularly funny anymore. Worse, I didn't spend enough time committing your face to memory, and now I was missing little pieces. Did you have short eyelashes, or long ones? I hated that you couldn’t remind me. I hated that I didn’t remember.

could you send me a picture of yourself?
I’ve got some old ones, but I don’t think they really look like you
I want one of my brother, the astronaut.

i have no idea what’s going on right now
but you’d better not be taking any unnecessary risks
you only have two years left
if there’s something wrong, promise you’ll tell me?

The changes are scary for me too
I promise I will
There’s more at stake now and I need to be conscious of
what my existence means for humanity, you know?

I wouldn’t mind if your skin turned green, or if you were a little more aggressive. I thought you knew that, though now I wasn’t so sure.

Do you remember
when I graduated?
We took that hike out of town
just far enough to see stars through the light pollution
And we tried to pick out all the old constellations.
It’s my favourite memory

This is what you were trying to tell me earlier, even if you didn’t know it
I’m sorry it took me so long to realize
that a future away from Earth wasn’t really a future for humanity
I don’t want to come back just to be a set of data points
helping billionaires escape a world they should be trying to save

you have
things back home waiting for you

Your line was silent after that.

The contract elapsed last week. You didn’t come home. There was no press release — it was as if you had never existed. But you had existed. At one point, you had been everything I was clinging to. Now, I guess I’ll have to find out who I am when I’m alone.

For the record, there isn’t much you could do that would make you any less my brother in my eyes. I don’t know much of what happened, even now: only that your new body was powerful and terrifying in a way that you couldn’t bring yourself to expose.

We might no longer genetically be family someday. Blood is thicker than water, but who knows what will be running through your veins after years on a star system millions of miles away?

I don’t want to give up on a better ending for you, and I’m not being consolatory when I tell you that genes can’t capture the essence of who you are. Because after ten years in space, your choice not to return was as impractical and hopeful and grandiose as every other decision you’d ever made. You knew the risks embedded in your ever-changing dreams of what it meant to save humanity. You bloomed in them the way sunflowers turn to dawn.

I refuse to let this be your obituary. You chose, and the not-knowing gives us the freedom to choose in turn. Embedded somewhere in that choice is your humanity.