What's the secret to hummingbird flight? Their eyes. 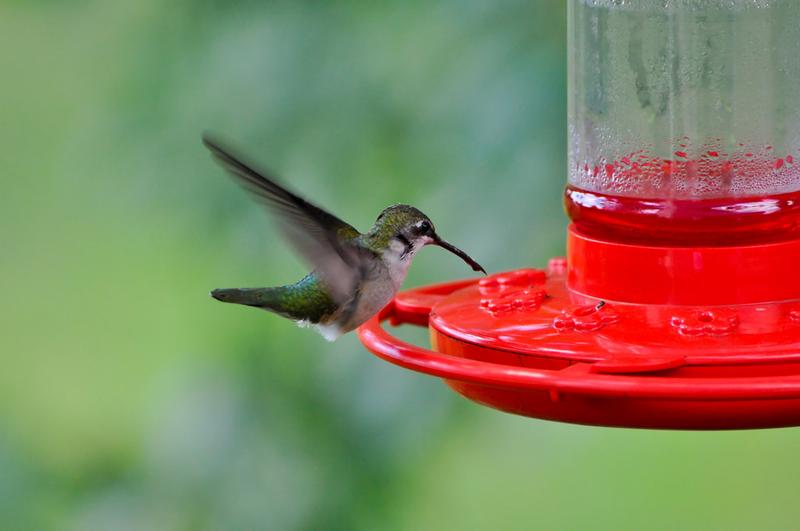 Hummingbirds are magnificent creatures — they fly at breakneck speeds, move with ninja-like agility and hover still in the air. It seems impossible that we could ever understand how hummingbird brains control their movements, but the picture just became a little clearer.

Visual information about motion travels along neurons from the eye to the cerebellum, where sensory information is gathered and integrated to produce a response. Certain clusters of neurons respond to certain types of motion. For example, the motion of buildings or trees passing by as you walk down the street lights up a different set of neurons than if you were to fall backwards and see the world rushing forward.

The cluster of neurons that relays backward-falling motion is common to all mammals and birds. In hummingbirds, these neurons make up a cluster of cells called the lentiformus mesencephali, or LM. The hummingbird LM is larger relative to brain size when compared to other animals, which suggests it may play an important role in hovering. Birds that can only hover briefly have slightly enlarged LM regions. It would make sense that an enlarged LM, which relays visual information, would be part of the hummingbird’s neural specialization for hovering.

UBC postdoctoral research fellow Andrea Gaede designed an experiment to see if hummingbird LM neurons respond only to forward motion, as they do in other animals, or if they perform some other specialized function.

The experiment measured single LM neuron activity in response to seeing a white screen with black dots moving in uniform directions. Gaede looked for changes in neuron-firing when the dots changed direction.

Gaede found that rather than responding only to forward motion, LM neurons in hummingbirds respond to all directions of motion. “The LM is really highly conserved, which is why it’s kind of surprising that it might be different in hummingbirds.”

“We think this is because when things are close to you, even when they’re moving slowly ... the motion across your retina is actually fast.”

Gaede said that in addition to being important for hovering, LM neurons might also be engaged during high-speed displays and flight.

However, the LM is only one of many parts involved in relaying visual motion, so this discovery is likely only a piece of the puzzle of hummingbird hovering behaviour.

“There are a lot of connections we aren’t taking into account by looking at a single thing,” said Gaede. “It’s always important to understand the underlying machinery … but it’s often very different to what’s happening in a behaving animal.”