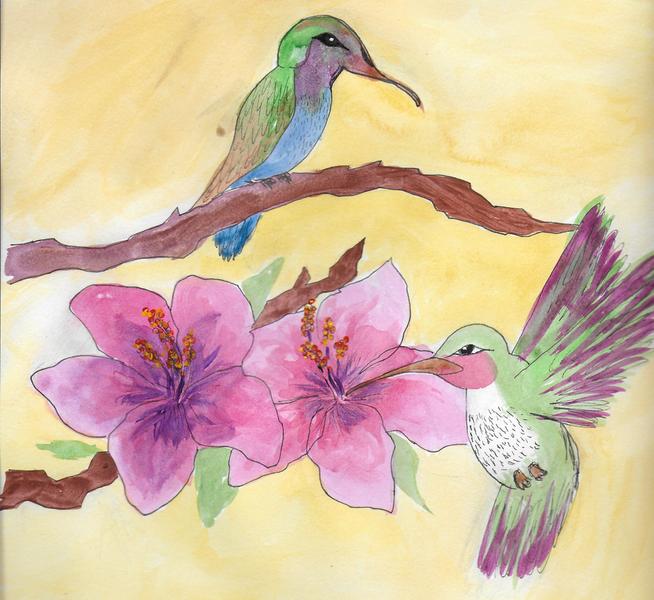 Have you ever been rushing down Main Mall, trying to get to one of your classes, dodging umbrellas with students blurring by as you try to navigate the jam-packed path? Have you ever wondered how it is that you are able to move so quickly with only rare collisions or, if you are a little clumsier, how you can increase your ability to dodge the oncoming obstacles?

These are precisely some of the questions that are being investigated in Dr. Douglas Altshuler’s laboratory, but instead of asking these questions of our own bodies, the UBC zoology professor poses them in the context of hummingbird flight.

On the movement side, they are currently working on how a bird’s ability to change the shape of their wings then lends them the ability to fly through different environments.

On the vision side, they are studying how birds interpret what they see in order to develop a flight plan — or rather how to move through the world without unnecessary collisions.

“The question that we’re working on there is, ‘how is it that birds interpret the information that they see in the environment as they move through it to safely guide themselves?’” said Altshuler.

The types of experiments that are conducted include having birds move along a tunnel with various visual stimuli projected on the walls. High-speed video cameras are used to observe how the birds move.

You’ll mainly find Anna’s hummingbirds in these experiments in the Altshuler lab because they display a natural nectar foraging behaviour, which allows the birds to be perfect for study in the tunnel since they are very happy to be in-flight often. Furthermore, they are native to North America and an accessible organism for study.

“One of the nice things about hummingbirds is that they will self-motivate, which is to say that if we put them in a tunnel where we put a perch on one side and a feeder on the other, they’ll fly back and forth down that tunnel all day long,” said Altshuler.

National Geographic recently collaborated with Altshuler's lab on an article in which the photographer captured a few images of the work from the vision side of the lab. In these images you can see hummingbirds navigating stimuli projected on the walls of a chamber in order to find the best flight path.

However, hummingbirds aren’t the perfect research subjects for every question in the Altshuler lab. On the movement side, the team are currently studying the biomechanics of wing morphing in other bird species since hummingbirds barely change their wing shape — though they were lead to study this topic by first investigating the manoeuvrability of hummingbirds.

Through a large scale study conducted on over 25 species of hummingbirds across different countries, the Altshuler lab was able to provide an in-depth definition of manoeuvrability and how to quantify it — a task that had previously been answered more qualitatively than quantitatively.

“The lab is quite interested in complex locomotion, so not simple things that you might be able to study on a treadmill,” said Altshuler.

Across different bird species, the lab determined that manoeuvrability can be broken up into three classes: translations, rotations and complex turns.

Translations — the speed of moving in a particular direction — were directly correlated with muscle capacity.

Rotations — the ability to turn during flight — were correlated with the bird’s wing-loading capacity or rather how large the bird’s wings were in relation to its body. Due to skeletal homology among all land-based tetrapods, this can be loosely related to how long a person’s arms are in relation to their body. The principle of rotations is similar to what figure skaters use to spin; at first their arms are stretched very wide and then they quickly bring them in to rotate faster.

Complex turns — motions that do not belong to either of the first two categories — were found to largely depend on wing shape in birds. Longer and narrower wings afford faster execution of these turns, which is why the Altshuler lab is currently researching wing morphing in different birds.

While there is still a lot to learn about optic flow and manoeuvrability, research from the Altshuler lab tells us that, like birds, if we want to decrease our frequency of collisions we should be vigilant of our surroundings and exercise our dodging muscles.