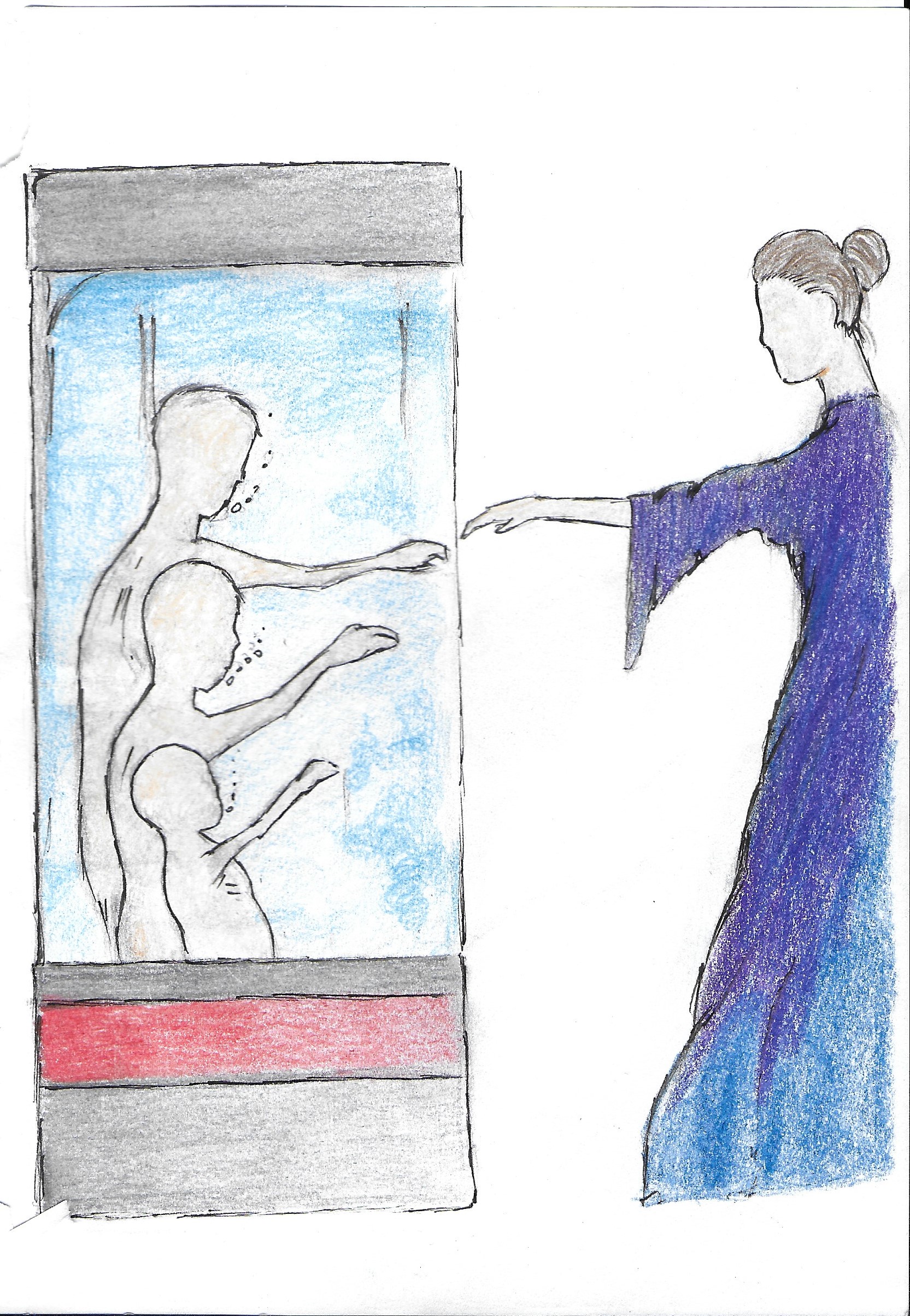 How far would you go to change the past?

“Last-minute deals! Buy 1 get another chamber for free! Cloning has never been easie-”

I shut the tele-ad down before it wakes the house. It’s only 7am but the regular onslaught of ads has already started to fill the large wall-screens. My eyeroll continues as I see the blinking light of another ad waiting to be played before I’m allowed access to my regular channels — such idiocy. I give up on TV and stroll into the kids room. Both 13, twins, sleeping comfortably in their pods. The monitor on the outside of each displays the sim they have chosen to play in their dreams. Caden’s swimming with prehistoric dolphins while Abby is speaking with Einstein. I smile in their perfection, their growth and interests emerging exactly as I had chosen them. Pressing the red button, I end their sim, signaling breakfast.

Walking into the kitchen, I see the prepackaged meal supps. Blue, red, and green pills for Caden and blue, purple, and pink for Abby. Smiling at the color balance, I place them strategically on a plate as Caden and Abby walk in.

“Morning mom,” Abby shouts, always the morning butterfly, she hurries to the table and in seconds, downs the supps.

Caden, on the other hand, ever the night owl, trudges into the room and slowly swallows each pill, individually. Only when he’s done, does he groggily say, “good morning”.

I silently laugh at the stark difference between the two. “Okay you two,” I say cheerfully, “out the door or you’ll miss your Tube!” Abby speeds out, dragging Caden behind her. As I wave them off, I absently wonder about the Tubes. I wonder if Tube 23 got fixed yet…oh well, 25 goes the same way, I think for the last time, as I rinse the cups and plates.

Dropping onto the couch, I get ready for the onslaught of ads that have been steadily filling the wall set. Someone has to watch them — and remembering Abby’s incessant watching of the science channel, I reason it’s better for me to watch the mind-numbing ads than her.

I’m only 5 ads in when a red alert takes over the screen. What now, I groan — some other government fighting with some other group, a burglary, a police chase?

I briefly remember my morning thought, but shake it off. Tube demolition was protocol if the transport was fully broken — besides the Tubes were all coated to keep the explosion within the casing. I’m about the close the alert when something catches my eye. The small subheading, two children in wreckage.

I scream. I don’t remember much but somehow the police are called. When I read the reports later, I see it states I was manically rocking back and forth, wailing incoherently. Just reading the reports, after so many months, still shatters what remains of my heart. Tube 23 had fully broken that day. City workers were dismantling the lower area of the tube when it started to fracture. Caden and Abby were walking past when the whole thing detonated, killing my twins, the two workers, and one other civilian. Tears stream down my cheeks, not for the first time, as I close the report, unable to read on.

I fall back into my memories when the TV screams “Last-minute deals! Buy 1 get another chamber for free! Cloning has never been easier! Missing someone? Call now!”

I shoot up, thoughts already starting to race in my mind. Cloning — THAT was the answer — how had I never thought of it! I could get them back; I could forever get them back! I yell into the speaker “buy item” and the order is sent. In a matter of hours, the package is at my door and I haul it inside.

I glance at the instructions on the top of the box, only registering that the clone creation takes a few hours. Without wasting another breath, I run into Caden and Abby’s room, the first time in months, and take old hair from their hairbrushes. Rushing out, I stick a piece of hair in each chamber and press the green button. I make sure to order extra supps for dinner today and wait anxiously for my children.

3 hours later, they’re done. Goo falls out of each chamber as I take two babies out. Tears start overflowing as I remember each freckle, each mole on Caden and Abby’s infant face. Not caring about the goo, I hold them close and breathe in their scent. But… soon after I realize there’s no breath on my cheek. I pinch their little fat arms, but there’s no movement, no crying. Babies need to cry. Horrified, I put them down, grabbing the box. Living children have to breathe right?! I frantically search for the answers but the instructions are garbage, illustrated pictures with no recommended incubation period. I throw the box aside and place the twins on the couch. Pushing into their small chests, I start CPR. Minutes, maybe hours go by, but they don’t breathe. Defeated, I sit in the goo, dazed, until my eyes slide towards the machines. I can make more, I think as I crawl near the two chambers. Quickly grabbing more hair, I stick them into the machines. I just took them out too early, I reason, holding onto the two dead babies.

This time I wait 5 hours. I take out two sleeping toddlers. Holding them in my arms, I put my ear to their mouths and feel their breath on my cheek. Relief washes over me as I kiss each on the forehead. Their eyes suddenly open and the two jump up and start running around. I settle in to wait for them to grow into their 13 year old selves. But, before I can relax, I see synthetic blood oozing down Abby’s face. She has started running into Caden, again and again and again. Alarmed, I grab Abby to make her stop but the clone is abnormally strong. She pushes me backwards then continues to run into her twin, cracking his head. Both are now heavily bleeding. Their facial features have become marred by the constant head-butting and blood.

I feel hysteria rising as I slowly look at the two dead babies and two toddlers slamming into each other — my hands start to shake as I move robotically back to the machines, and place more hair into the chambers. This time, I think, this time, it’ll work.

The toddlers keep smashing into each other until they can’t physically move. Both lie on the ground, covered in blood, and twitching. The spurted blood on my shirt smells of chemicals and I immediately throw up. Unfazed, I start to rock as I wait for my children to be done, back and forth, back and forth.

8 hours go by before I take Caden and Abby out. They’re a bit older now, perhaps eight. Both crouch out of the chambers, already awake. Abby appears confused and Caden rubs his eyes.

“Mom?” Abby says staring at me.

I cry out as I hug them. Abby suddenly shrieks and starts thrashing, forcing me to let go. “What’s wrong honey?” I ask concerned.

She points a small shaking finger at me.

Unsure, I think back at my appearance then realize — the puke. “Don’t worry about the puke — clothes can always be washed,” I try to say reassuringly, but Abby just continues to scream. Caden now joins his twin, both wailing. “Caden, sweetie, what’s wrong?!” I ask, trying to go near the two.

Both back away as Caden points his tiny finger somewhere beyond me. Muddled, I turn following his gaze until I see what he’s looking at…the couch. Or more specifically, the dead bodies on and near the couch. Frantically, I turn back towards Caden and Abby trying to explain, but they’re too hysterical that my words get drowned out by their tears. Their screams rise to deafening levels as I grab my head and try to think. I don’t know what to do, I mentally shout, what do I do…what can I do?!

The machines, a voice in my head whispers, one more time and everything will be back to normal - we just need to quiet these two. I remind myself these are just clones, that I didn’t give birth to these children. As Caden and Abby continue to howl, I rush at them, tears flowing, hitting them with full force. They crash into the wall, their heads bouncing off like wound springs. Both immediately become silent.