‘Like PB and J’: The Ubyssey’s sci-fi contest winner 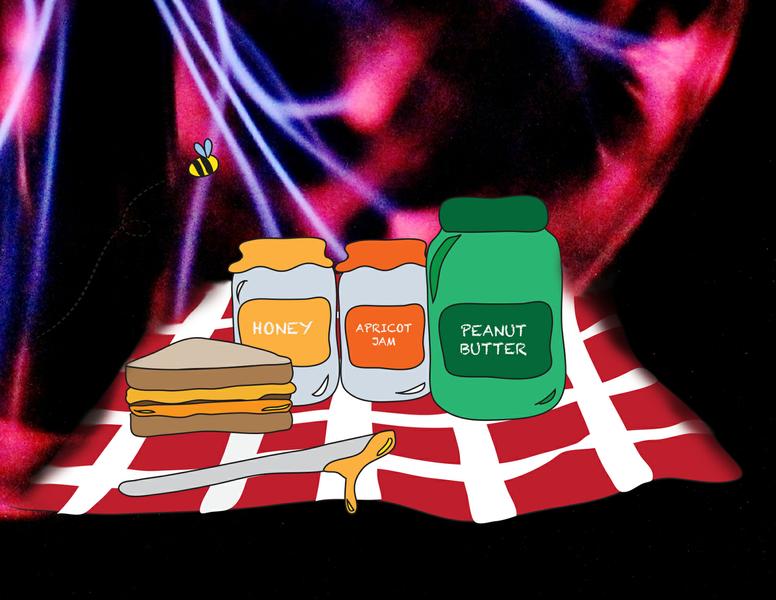 Mackenzie takes so long to butter bread — with as much care as though she’s painting a portrait, eyes narrowed, exhale imprisoned behind her teeth — that Sara learns that buttering isn’t just an act of spreading onto but also into, layers of jam or margarine sinking into porous, waiting bread.

“Never noticed,” she says, “but bread’s kinda like a sponge.”

Mackenzie smiles but does not breathe. If anyone could break the record for holding one’s breath it’d be Mack — but they’d only be allowed to measure when she was making sandwiches. Sara isn’t sure if that would constitute some sort of fraud. What if someone accuses Mack of buttering up the judges? She grins and snorts.

“What’s so funny?” Mackenzie, finally done, chomps into her bread. Honey, peanut butter and apricot jam seep from the back of the fold-up sandwich. Mack licks the leaking side. “I hope you’re not laughing at me.”

Sara widens her eyes, shakes her head. A lock of dark hair escapes her bun and, tucking it back, she says, “Mack! When have I ever!”

“It took you fifteen minutes to butter the bread?”

“Wouldn’t’ve known it,” she snickers, and Mack points the knife at her, a pearl of apricot jelly trembling on its teeth. Sara puts her hands up in surrender but Mack flicks the jelly at her anyway, and says primly over Sara’s yelp, “Six times.”

Sara swipes at the amber blob — it landed above her jawline, just out of her tongue’s reach — and sucks her finger, tang of apricot exploding all too briefly in her mouth.

Their phones chime in concert. Sara twitches but restrains herself — she shouldn’t look like she’s been waiting all day, Mack would notice — and Mack dives for her own. But Mack’s butter-greasy fingers smear the touchscreen and frustrate the fingerprint scanner, making her swear and Sara laugh. The laughter peters out when Sara calmly picks up her phone to read Dear Sara Flyn giving way to your application was not chosen, but before she can shrug like she always does as though it doesn’t matter, shrug off the disappointment and the irritation with her undying hope and worst of all the lack of surprise, Mackenzie is gasping, then grinning, then whooping.

“I’m in!” Mack does an embarrassing happy dance around the kitchen that Sara doesn’t watch, knows about only through Mack’s intermittent blocking of the dying light. “I’m in, I’m in, I’m gonna be a —”

“It wasn’t so bad,” Mack says, a month later, after the surgery. Her pillow is halfway to devouring her drawn face, the dark circles under her eyes could hide the moon, and she is the luckiest girl in the room.

Sara shakes her head and swallows back jealousy and says, “No?”

“It’s not really supposed to start taking effect for a while though, right?” She strokes Mack’s hair back, the better to see the bandage. She frowns: “You’ll bruise.”

“Small price to pay for superpowers,” Mack singsongs. She closes her eyes, smiling dreamily. “Wonder what I’ll get.”

“Hopefully heightened speed.” When Mack doesn’t reply, just keeps smiling like the luckiest girl in the world, Sara feels something in her tighten. She still manages her next words — “So you won’t take years to butter bread anymore, see?” — but they come out flat.

The room goes silent after that, save for the beeping of various machines, and outside the hushed, watchful bustling of nurses. Mack must be in pain, yet she’s smiling. Maybe that’s her superpower — ability, that’s the official term.

Mack’s eyelids flutter, but then settle on closed. “Can I ask you a question?”

Sweat prickles in Sara’s armpits. She wonders if visiting hours should be ending soon. “It seemed kind of elitist, and also kind of, ‘Bwahaha the government’s gonna fuck with your braiiiin!’ I mean, superpowers?” She snorts, waves a hand dismissively. “It’s kind of stupid, isn’t it? Uh, I mean, not to say that you’re — that you’ve — sorry, that isn’t what…”

“That’s why you didn’t apply,” Mack says, wisely. “You already had a superpower: you can effortlessly put your foot in your mouth.”

Sara’s shoulders sag, and she laughs breathlessly. “You’ve got it.”

Mack giggles, makes a gesture that is probably supposed to be ‘putting your foot in your mouth’ but comes out very differently, and then Sara’s laughing, too, until Mack says, “I’ll miss you.”

“You’ll call me,” Sara corrects her. “The institution —”

“It has wifi, right? Just call me, it’ll be like always.”

“Holographs aren’t the same. I mean, won’t you still miss me?”

“Nah,” says Sara, with a grin, but Mack doesn’t return it. When a nurse escorts Sara out and Sara chances a glance goodbye, Mack’s finger is pressed hard to the morphine pump.

This is how they fall apart:

Mack calling her, looking — even through holograph — shinier, stronger, better, until Sara breaks her phone and informs Mack they’ll have to just message via computer until it’s replaced. (Sara replaces the phone one week after it’s broken, and does not mention it.)

Sara applying for private-owned variations on the government’s endeavor and receiving so many rejections that your application was not chosen is tattooed on the insides of her eyelids.

Mack on the TV, doing something sweet for baby turtles. Sara’s older brother dying — caught flying over the Pacific by a super-hurricane — and Sara declining to mention it to Mack, on the rare occasion they catch one another. Mack flying to the apartment and yelling at her about her absence and Sara yelling back until both are hot with fury and tasting salt from tears.

Sara, reading a eulogy Mack would’ve proofread, dress ripped at by wind, mascara ruined by rain. Sara, changing her program to match her late brother’s — environmental science — because her father’s little remarks about her ‘useless’ degree have grown sharper.

Sara, graduating — inviting her father to the ceremony, but not Mack. Sara: acing an interview, celebrating with acquaintances forged in the fire of exam season and forgotten otherwise. Sara asking her new colleagues, “How can we kill them,” referring to hurricanes.

Sara, only thinking about Mack to wonder if Mack ever thinks about her.

The conference hall is buzzing with people and Dr. Singh’s newly patented bees. Sara smiles at the sensation of one in her cupped hands and assures the good doctor that they tickle just like the real thing.

“Though I’ll always wonder if they’re spies,” she admits, to Dr. Singh’s laughter.

Sara roams briefly, then heads to the session on thunderstorm asthma, which has become prominent since the April of 20—. The door opens with a pneumatic hiss and the room is empty but for — Mack. Eating a sandwich, licking her webbed fingers clean of jam.

Sara catches her breath and Mack turns and sees her. The gills at her neck widen, as do her eyes.

“What are you doing here?” Mack asks. Her breath smells like peanut butter, jam, no longer of honey — Singh’s working on that.

“Same as you. Saving the world.” Sara stands, hugging her notes to her chest. “More slowly, though.”

“Slow and steady wins the race.”

Mack blinks. It takes longer than it once did, what with the inner eyelid. “What?”

Sara shrugs, regretting. “You were eating a sandwich…?”

“Whole conference, if the weather holds.”

“Not yet, but — how about I walk you over, introduce you?”

Mack regards her with the same level, steady gaze. All the differences and yet so much the same; it loosens Sara’s tongue and she spills out apologies, excuses, confessions. It seems to take very long, and take everything out of her.

Then Mack says, “Catch me up on our way?” and Sara breathes again.

This is how they fall back together:

Through research and action and biotech fashion and all the offerings of a shifting world. And sandwiches; of course sandwiches.