Aided by climate change, the Mountain Pine Beetle has already spread into BC’s forests and threatens forests in eastern Canada.

A quiet battle is being fought in the forests of western North America, and millions of pine trees are dying in its wake. Shades of green that once permeated the flora of British Columbia’s forests are disappearing.

The insides of lodgepole pines are turning blue with a fungus — it is aptly named the blue stain fungus. The trees’ needles are shifting to shades of dull brownish-red. Aerial surveys have observed rolling hills of northwestern pine forests stretching to the horizon without a healthy tree in sight. Estimates place the total affected area somewhere between ten and 18 million hectares — roughly the size of Syria.

Due to the epidemic, the state of North American pine trees is extremely bleak.

According to Christine Chiu — a graduate student focusing on botany and chemical ecology at UBC — climate change, specifically rising temperatures, has played a major role in the widespread decline of the forests over the course of the past two decades.

But a warmer climate hasn’t been the force directly devastating these woods. Rising temperatures from Colorado up the spine of the Rockies to the Northwest Territories have facilitated the insidious creep of an insect middleman: the mountain pine beetle.

The mountain pine beetle is the species plaguing the pine trees of Canada and the United States. These beetles are the bridges connecting human fuelled climate change to the widespread destruction of the western forests of North America.

Aided by human activity, the mountain pine beetle, a creature no larger than a grain of rice, is the direct cause of this arboreal strife. 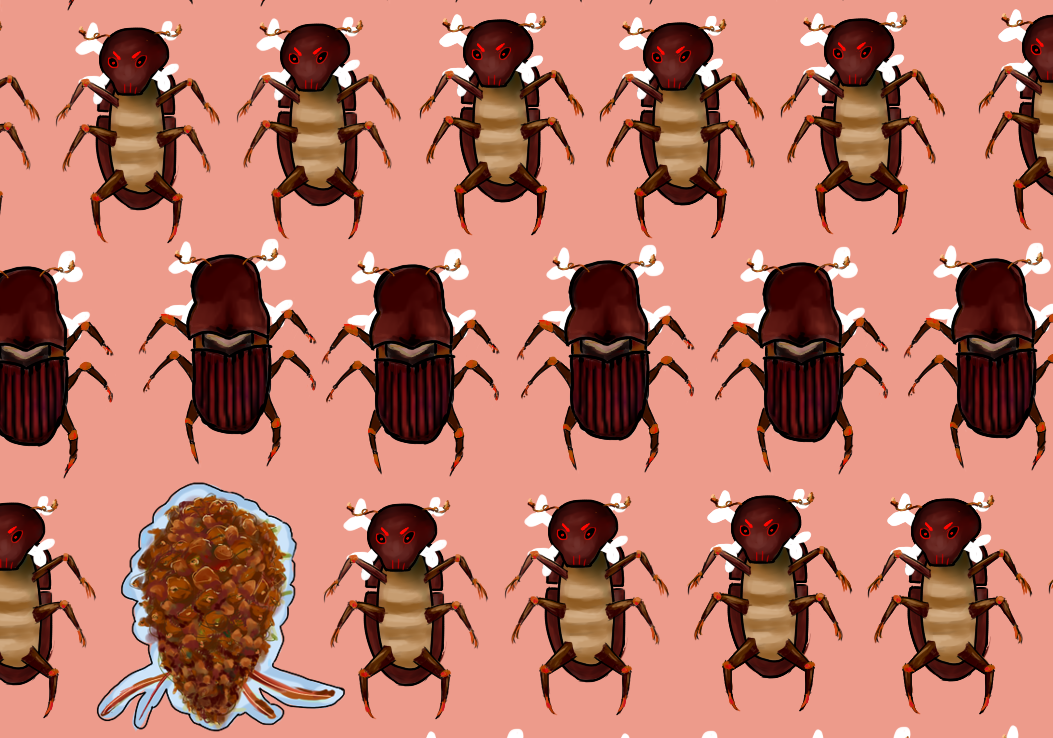 In environmentally harmonic conditions, mountain pine beetles are largely unable to make it through the harsh winter of the Rocky Mountain ecosystem. It was only after a number of above average temperature winters in the 1990s that the beetle’s population burgeoned — setting off the environmental catastrophe we are witnessing today — by allowing the species to spread deeper into the boreal forest.

If the mountain pine beetle possessed the intelligence to realize what we humans have done for their numbers, they would be forever grateful to us.

The beetle’s success is literally rooted in the number of trees it can feed on due to its newfound resilience. Its attack strategy emphasizes quantity over quality. A tree is unable to fight, run, or hide, so all the beetles need to do is launch a barrage upon their piney prey.

The attack begins with a female, known as the pioneer beetle, who finds a tree and releases an aggregation pheromone known as trans-verbenol. Great numbers of beetles can then flock to her precious real estate. Because of this pheromone, the mountain pine beetle can wage all-out assaults on the lodgepole pines that it burrows into in order to survive.

A lodgepole pine’s natural defense system is the release of a chemical known as alpha-pinene, which also yields the fragrant byproduct of pine’s unique aroma. An attack on a lodgepole pine waged by two or three beetles would prove futile — the trees are naturally adapted to such numbers. In conditions that existed prior to the 1990s, the population of the mountain pine beetle was not large enough to significantly affect large portions of forest.

The Beetles' strength lie in their numbers. Kristine Ho

But a pine tree with hundreds or thousands of beetles on it is doomed, and it is a common sight in affected areas today. The insects bury into its bark, spreading blue stain fungus and drying out the tree until it dies and its needles turn red. This process lays the groundwork for the next generation to emerge and repeat the calamitous cycle.

As a result of her research, scientists now have more predictive power regarding how the beetle might thrive in pine species found further east, such as the Jack pine. The Jack pine is found in Alberta, a province in which the presence of the beetle was previously unheard of.

Chiu also found a clever tactic the beetle utilizes that could help explain its spread to regions 320 kilometres North and thousands of kilometres East of where climates once prevented the species from spreading.

“Something really cool about the beetle is that it doesn’t simply go on the tree and make its pheromone from the alpha pinene it encounters on the tree. I found that throughout its life cycle it stores trans-verbenol in its body. It attaches it to another molecule and stores it inside its body. When it gets on a new tree, it releases that trans-verbenol from inside the body. It’s a very complex system. It’s not as straightforward as it seems,” said Chiu.

Pine needles dry up and turn a dull red colour in response due to beetle infestations. Kristine Ho

Forest fire suppression also plays a role in the spread of the beetles. Natural fires are a way of “thinning out” a forest and increasing biodiversity. Controlling fires for the protection of local communities has bred the woods into an ecologically homogenous environment that is extremely conducive to the spread of the mountain pine beetle.

Treating this problem has proven difficult, to put it mildly. “Preventing the spread of this species is extremely laborious,” said Chiu.

The process involves detecting infected trees before the beetle spreads to surrounding pines, made all the more difficult by the fact that trees don’t show signs of infection until months after the invasion starts. Imagine hunting for a needle in a haystack, except the needle only becomes visible after it’s too late.

Then, the trees with pine beetle infestations must be cut down and burned before the beetles can spread.

The primary focus of experts now is stopping the spread of the beetle before it can deal damage to the forests of eastern Canada. But forest scientists can only do so much on their own.

Longstanding harmony in the forests of the U.S. and Canada will only come when we humans greatly reduce our carbon emissions.