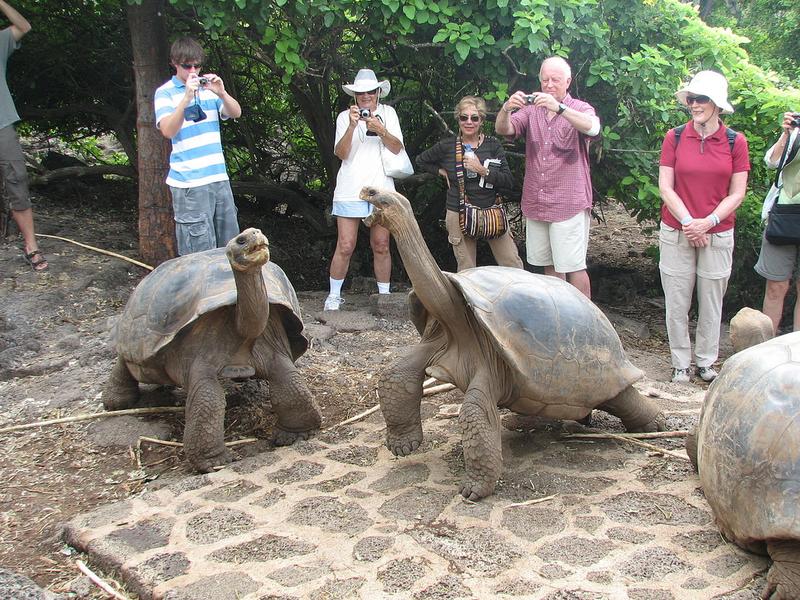 These aren't Eastern Santa Cruz Tortoises but they are tortoises. Photo courtesy of Wikipedia

A team of international scientists — including a biology professor from UBCO — have discovered that there are two species of giant tortoises living on Santa Cruz Island in the Galapagos, contrasting the one that had previously been identified. Although the tortoises lived on different sides of the same island, they had always been considered the same species.

Michael Russello, an associate professor in the department of biology at UBCO, was one of the researchers on the team comprised of individuals from Australia, Crete, Ecuador and Australia. They said that this discovery was particularly timely in terms of conservation of the species.

“In terms of the practical application of this, this new species is of immediate conservation concern,” said Russello. “[The species] is small population sizes, low genetic diversity and is only found in a very narrow area of Santa Cruz Island that is under pressure from converting habitat to agricultural land. This work already has some immediate effects for prioritizing this new species in terms of conservation.”

The team found that the two Santa Cruz tortoise species were as genetically diverse from each other as to any of the 16 other species found in the Galapagos Islands. The two populations, situated just 20 km apart on the island, have previously been considered the same species — they look virtually identical but have never before been analyzed with this genetic approach.

The population on the Western side of Santa Cruz Island is large with several thousand individual giant tortoises. The Eastern population, however, is somewhat smaller with between 100 and 200 individuals. This new species of the Eastern Santa Cruz Tortoise is named Chelonoidis donfaustoi.

“The study combined field sample collection and laboratory data collection — both genetic as well as some high resolution scans for morphology,” said Russello.

The team travelled to Santa Cruz Island, collecting blood samples from as many specimens as possible on both sides of the island. They found bone samples in museums for the type specimen and the paratype — a specimen used to define the tortoise’s genetic background.

Giant tortoises have been in danger in the Galapagos Islands for several hundred years due to human exploitation, introduced species and habitat degradation. The research and discovery of the new species means that now special emphasis can be placed on the population by the Giant Tortoise Restoration Initiative — a collaborative project comprised of international scientists, the Galapagos National Park Directorate and the Galapagos Conservancy.

The Galapagos tortoises have been subject to biological inquiry into their population for the last 20 years, but only in the last 10 years has research progressed enough to formally define the new species since Russello started working on the project as a postdoctoral fellow at Yale. The type specimen fully represents the characteristics of the new species, which is essential for its definition.

“The system has provided excellent opportunities for enhancing our knowledge of speciation, how different species arrive as well as evolution on island,” said Russello. “It continues to be a very rich system for demonstrating new ways for which genetic and genomic tools can be used for biodiversity conservation.”

The work has already had some immediate effects for prioritizing the new species in terms of conservation. The team is now continuing to pursue questions pertaining to all 16 formally described species of giant Galapagos tortoises.

With only a few hundred of the Eastern Santa Cruz Tortoises still surviving, they are now part of a large conservation program to protect the diversity of the Galapagos.

“Without this kind of inquiry, there’s potential to lose this kind of biodiversity before even knowing it exists,” said Russello.