Increased coyote sightings on campus a cause for concern among students 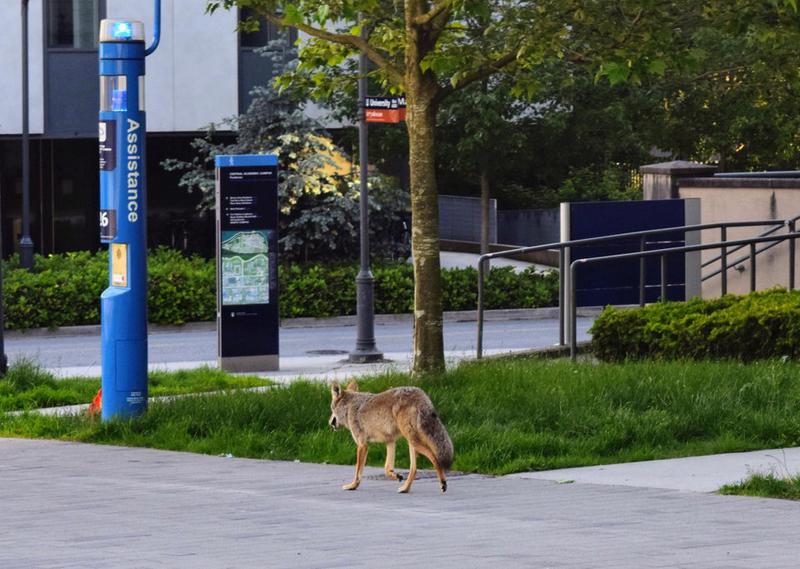 “I was traumatized because I didn’t expect anything. I was looking in my rearview mirror and then [the coyote] just came out.” K200YVR/Reddit

In the months since campus activity has wound down due to the COVID-19 pandemic, UBC has seen a sudden influx of coyote sightings.

A callout made by The Ubyssey to UBC Facebook groups yielded over a dozen reports of individuals who have come across coyotes in the past few months. Some coyotes were even aggressive.

“Early in the spring [and] summer period is when coyotes are raising pups and have increased nutritional requirements,” said Dr. Cole Burton, assistant professor in the department of forest resources management and principal investigator of the Wildlife Coexistence Lab at UBC. He suggested that the increase in sightings could be due to food stress causing coyotes to search for food from humans.

“One of the phenomena that we're studying under this pandemic is how wildlife are responding to these significant changes in human activity levels and UBC would be a great example of a place that's normally very busy and full of cars and people, that has become much quieter,” said Burton.

“When we have these animals that are living on the margins of human society like coyotes, that provides them an opportunity to become more active and to use human areas more frequently.”

Second-year student Kira Bryan was at the Nest with a friend at around 4 p.m. on a sunny June day when she suddenly saw a coyote run past a group of people.

Initially she mistook the coyote for a large dog, adding that “it was so close to people that we actually thought it was their pet … it was right on the sidewalk.”

Fourth-year student Lilia Laihem was driving toward Totem Park in the early hours of the morning when a coyote suddenly jumped in front of her car. She quickly reacted and swerved, but still hit its tail.

“I was traumatized because I didn’t expect anything. I was looking in my rearview mirror and then [the coyote] just came out,” she said.

Second-year student Nazia Nadir was going for her usual morning jog behind Marine Drive Residence when she noticed that a coyote was following her. Suddenly, the coyote began chasing after her.

“I tried to cross the highway [but] the traffic was running, everything was scary ... it started following me even while I was crossing the road,” said Nadir.

“I got really tired, so I had to wave towards the traffic, and then show them the coyote behind me ... A truck was coming from the front, then the driver started the horn. Then the coyote stopped for a while and that gave me a chance to get out.”

Nadir was chased for around seven minutes before she finally managed to escape. She claims she and other people have seen the same coyote in nearby areas.

“I looked into its eyes and I was very close to it, so I can definitely tell [it apart from other coyotes],” she said.

According to Urban Coyote Research, a coyote that follows or aggressively approaches people should be treated with a high level of concern as they may pose a safety risk.

“They tend to avoid people by having more of their activity at night,” said Burton. As such, recent coyote behaviour reported on campus is unusual.

Campus Security confirmed that they have received reports of unusually bold coyotes.

According to Ali Mojdehi, acting director of Campus Security, coyotes are normally harmless but “can be aggressive when people get too close.”

If you encounter a coyote, Campus Security recommends that you:

“You don’t want to run away from any kind of predator animal because it could trigger their predatory response where they think [you are] a prey animal fleeing,” said Burton.

Feeding coyotes can cause them to lose their natural fear of humans. Doing so is prohibited by the Provincial Wildlife Act and carries a $345 fine. According to Mojdehi, this fine is enforceable by UBC Security.

“Maybe the silver lining of these encounters, which no doubt can be intimidating and troubling for people … will be helping to remind people or make them aware that we share the environment with these animals,” Burton added.