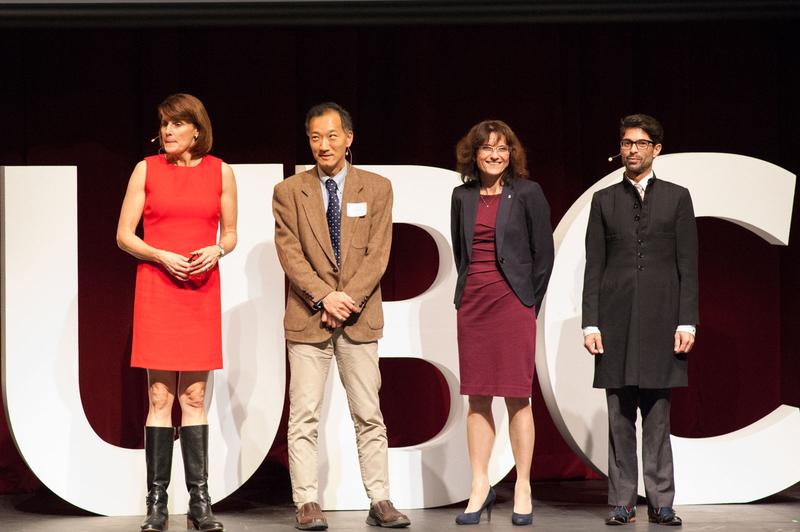 On November 22, UBC spent the day welcoming its new president, Dr. Santa Ono. After an installation ceremony and celebration concert, Santa hosted a forum of four talks centred on the theme of discovery.

So what did we discover?

Our brains are plastic

“Science is a story,” said Dr. Lara Boyd, Canada Research Chair in neurobiology of motor learning and UBC professor. Just 25 years ago, common belief held that our brains were static and the only changes observed past childhood were negative — that we were losing brain cells over our lifetime. Experiments on the neurologically famous patient HM revealed that the brain can recover its functioning after trauma which is called neuroplasticity, the potential for the brain to change.

Today, we know that the brain can change in three ways: chemically, functionally and most surprisingly, structurally. This year, UBC researchers released a paper documenting the first ever demonstration of myelin plasticity upon the learning of new motor behaviours. We also know that neuroplasticity can occur for the better or worse, and we need to engage in meaningful behaviours to promote the changes we want.

But of course, there are limits. Why aren’t we able to harness neuroplasticity to learn anything we want? Boyd explained that this can be attributed to the “dose problem” — it takes a lot of time and practice to stimulate these developments.

To get around the dose problem and optimize neuroplasticity, researchers are using tools like exoskeletons to encourage rehabilitation after strokes. These prosthetic devices allow an individual recovering from a motor impairment to practice walking movements while they engage in their daily activities.

Researchers are also using transcranial magnetic stimulation to apply electromagnetic fields over the brain to pre-excite populations of neurons, which “primes” them for learning sessions, making these sessions more efficient.

Additionally, research has shown that short bouts of high-intensity exercise before a learning session can encourage neuroplasticity by up-regulating growth factors in the brain. The catch here, though, is that you have to have the right variant of a dopamine gene to benefit significantly from such exercise.

This brought Boyd to highlight the variability problem underlying medical neuroscience research. It attempts to minimize individual variability in order to achieve significance in its results. This leads to findings for the average test subject, but the “average” person doesn’t exist. To embrace individual variability and the brain’s massive redundancy in problem-solving in research findings is important, as it would allow us to personalize medical treatments. In neuroscience, one size does not fit all.

“Talent can be found in the most unpromising of circumstances,” said Dr. Ken Ono, Santa Ono’s brother, wrapping up a talk on the life of Indian mathematician Srinivasa Ramanujan.

Ramanujan’s mathematical genius was recognized some 50 years after his 1920 death. His story is an unlikely one — he was a devout Hindu living in South India, subjugated by British colonialism, dropped out of college twice and claimed to have received visions of mathematics from a goddess who wrote formulas on his tongue.

His talent was recognized by British mathematician G.H. Hardy, who invited Ramanujan to Cambridge in 1913, just before the outbreak of the First World War. A new film, The Man Who Knew Infinity, associate produced by Ono and starring Dev Patel and Jeremy Irons, describes their mentor-mentee relationship. While at Cambridge, Ramanujan published 30 groundbreaking papers despite his lack of mathematical knowledge and training when he arrived to the school.

Ramanujan left behind three notebooks of work after his passing. The works in these notebooks fuelled the careers of brilliant mathematicians like Pierre Deligne and Jean-Pierre Serre, both Fields Medal awardees who worked to decipher the formulas he left behind. His formulas are currently being used to study the distribution of black holes and quantum gravity, among other things.

Ramanujan’s story has prodded several questions — if he was in one of our classrooms today, would we recognize his talent or dismiss it? How can we find and support the exceptionally talented individuals who are able to propel entire fields forward?

Robotics engineer and professor of mechanical engineering Dr. Elizabeth Croft opened the conversation of robots. Understanding of the “robot” has progressed since the term was first introduced to science fiction by Karel Capek’s play, R.U.R. Now, robots are being designed to live in our unstructured human environments and make decisions.

So how do humans engage with these autonomous non-humans? What are the rules and who makes them? Who is in charge?

Croft offered a scenario as food for thought. Say there’s a service robot that needs to use an elevator to make an urgent delivery to another floor. Would it be acceptable for this robot to ask someone to get out of the elevator so it can make its delivery? Can the robot have priority?

Croft’s research team is trying to answer the related question of how we negotiate with robots.

In reaching tests, where a human subject sits opposite from a robot as they simultaneously reach for an object in the middle of the table, we find that humans are uncomfortable when the robot yields to their hand abruptly. Croft’s team programmed “hesitation gestures” in a robot so that it would yield to another human reaching for the same object in a more recognizably-human fashion. Their finding was that people interacting with this robot more easily “understood” what its intentions were and liked it better too, going as far as to describe it as “shy” and “nice”.

If small gestures impact our liking to and perception of robots, what happens when the stakes are higher? If we were to negotiate with a robot driving a car, for example? The Open Roboethics Initiative is an organization that crowdsources answers to some of these pressing questions.