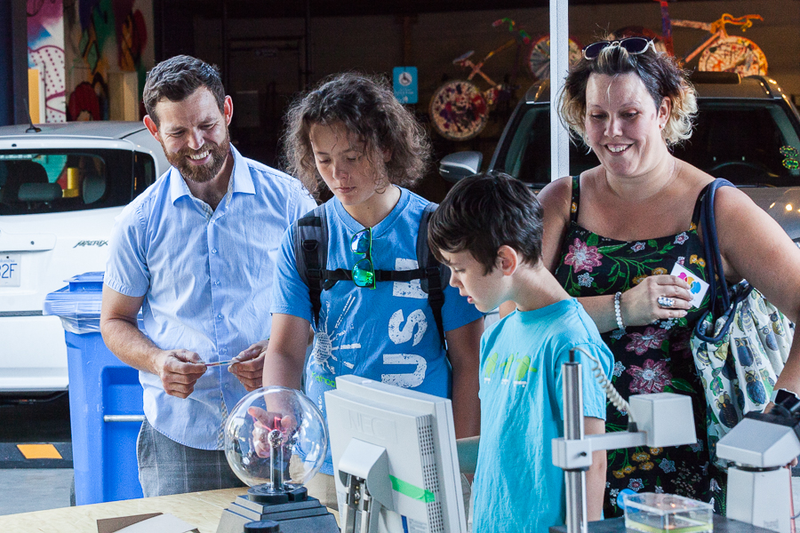 Although science is a large faculty within UBC and many institutions, accessing science outside of the institutions and classrooms is more challenging for the general public. How can a citizen participate in science without equipment, lab time, expertise, or even collaborators?

In 2009, a group of UBC students and staff recognized these barriers and teamed up to democratize science, increase its accessibility and create an interdisciplinary platform for idea exchange. They created the Open Science Network (OSN).

The Open Science Network is a non-profit society that serves the science and maker community through education, outreach and the provision of space. Currently, they run an open community lab out of the MakerLabs space on East Cordova and Main street, which is a compact space housing microscopes, a freezer, basic lab equipment and an impressive amount of activity.

The lab is home to a community of citizen scientists, professional scientists, artists, designers and makers of all ages who are pursuing their own science projects.

“The original idea was to have a lab where people could work on projects ... where people with an idea, but [who] did not have access to a lab could come and try those ideas out and get a little help,” said Wes Wong, a staff member of UBC Botany and a founding member of OSN.

Members who are interested in lab work can receive some training in “basic microbiology techniques like pipetting, growing bacteria, using the Polymerase Chain Reaction machine (PCR) [to amplify DNA] and running gels [through a gel ectrophoresis machine to separate DNA fragments by size] from Scott Pownall, a PhD graduate from UBC and the resident microbiologist,” said Wong.

The group has also made further efforts to serve their members by offering more advanced synthetic biology classes and workshops at their lab.

Beyond their lab, the OSN is equally busy creating science engagement opportunities through the city. Notably, they host STEM Mentoring Cafes for grade eight students to increase the exposure to scientific fields for youths.

Most recently, they also hosted the Science and Maker Jamboree on June 17 at Chain and Forge, as part of the Granville Island Activation project. The event showcased diverse programming, with science-inspired slam poetry, activities for kids, booths from local science organizations and speakers from UBC science departments.

“We just wanted to engage people with science, just get people out and doing things. We wanted to make it accessible,” said Wong.

“[Some] barriers to science are finding out where to do it and having the means to afford it… so [the Jamboree] is a fun free thing to experience.”

Wong, who is instrumental in running outreach events, said he advocates for public engagement in science because STEM is an important evidence-based component in our decision-making process, especially with issues like climate change and city planning.

“In a lot of the activities we run, people say ‘No, no that is too hard to understand,’ but we show them it isn’t — we break it down to concepts they understand. So now they know it is not so scary, [and we] direct them to the right resources so if they have to make a decision it isn’t just based on what they hear from the loudest talking head on television.”