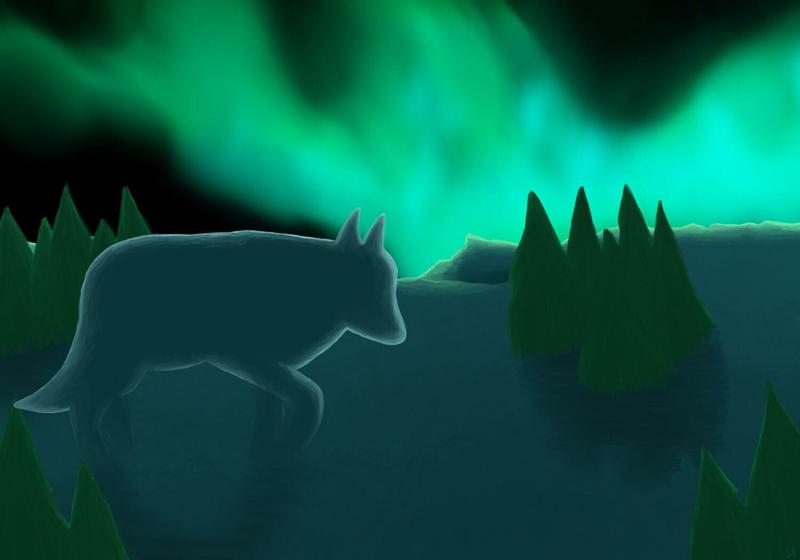 Every day feels like the end of the world. Nanse could hardly remember when things were okay; she was a child when the war came. She shook off those old memories every time they came — they’re dead. Remembering the sun won’t bring it back.

After the fallout, a layer of soot settled in the atmosphere, plunging Earth into a nuclear winter. Northern cities were ravaged by American militant extremists, and the citizens put into labour camps. The Militia established bases in conquered cities, all connected to its headquarters through an extended series of electrical cables called The Network that spread outward like veins. Temperatures had fallen too low for easy commutes; the Militia maintained communication and control through The Network only.

Nanse evaded the work camps. She prided herself on her grit and courage — and when the Militia came, she fled to the woods with a group of guerilla warriors. Resources were wearing thin and death became commonplace. It was hopelessness, not hunger, that drove Nanse to leave. Their best chance to overthrow the Militia would be to cut off the closest exposed part of The Network 100 miles to the south, but the trek through the sub-zero temperatures and violent snowstorms would almost certainly be fatal. It’s die on the journey out there, or stay here and wait to die​, Nanse thought. She was going to burn it down.

Juan broke free. He ran from the camp, bloody and deranged, but alive enough. He was clothed in the coats and armed with the weapons of the guard he had killed. He pulled a smuggled map from his bag, studying his target 90 miles south. The Network.

Nanse trekked through the snow systematically. The icy air prevented her from staying outside for more than a few hours at a time, so she would have to travel through abandoned towns, hopping from building to building to stay warm. She surveyed the grey landscape, almost the same colour as the sky, for the next place she could stay. A hollow roar erupted in the distance. It was a kind of mechanical roar, too loud and too metallic to come from anything organic. ​

Warmors​, she thought, ​I’d recognize their scream anywhere​. The Militia had built them to kill anyone who escaped the camps. ​They’ll want me too. Nanse moved faster towards her next building; the warmor’s radar wouldn’t be strong enough to detect her through the walls. She glanced backwards to see a faint metallic glimmer on the horizon — the warmor. And something else much closer, right in the warmor’s path. She squinted, straining to make out what it was.

Juan had walked all day on a straight path to headquarters, warming himself with small fires just enough to stay alive. He heard a tinny, hollow and unfamiliar roar in the distance, and the faint churning of gears. He momentarily paused and then pushed forward. But 20 minutes later, he heard it roar louder. He turned towards the sound and saw the source advancing from the south. A giant, wolf-like robot advanced towards him from the south. It moved almost like a canine but tensed in choppy, jerking movements, no doubt due to its hasty construction. Juan stood still and watched.

“What. Are. You. Doing.” It was more of a question than a statement. Juan whirled around to see a massive woman standing behind him.

“You have to come with me. That thing will kill you.” Nanse urged, grabbing Juan’s arm. “Come, now.” Juan paused only a little and then let her pull him.

He followed Nanse to a small, abandoned cabin towards the edge of a wood. The warmor was still in sight.

Juan was silent but Nanse could tell from his expression that he believed her.

“Where do you come from?” She asked.

He said nothing, but briefly shifted his eyes from the warmor to her.

“Did you come from the camps?”

“You’re unprepared,” Nanse stated. “You can’t just walk there, you’ll freeze. You have got to stop and go inside. You rest and get warm.”

“So what are you doing? You came to run? To where? There aren’t any cities close enough for walking. You left the camp to freeze to death?”

Juan shifted his gaze up at her again. “Network,” he seemed to struggle to say, as if it was the first word he’d said in years.

Nanse and Juan slept in shifts, keeping lookout for the warmor. There was a silent agreement between them that they traveled together now. They broke their days up into hours of walking, mediated by an hour of warming in a house and scavenging whatever food stores they could find. They heard the warmors from time to time, but no more came close enough for them to see.

Twelve days in, they were close to The Network. They had moved south enough that it was noticeably warmer, but the buildings started to thin out. Juan and Nanse had been stuck outside for eight hours and were urgently seeking out a place to rest. Gusts of wind whipped Nanse’s hair, coated in thick clumps of ice, into her face. The landscape was empty and white, now darkening in the dusk. Nanse doubted they could survive the nighttime temperatures; it was a race against the sun. She moved with urgency, singularly focused on finding anywhere to stay, blocking out all other senses. Juan grabbed her shoulder, breaking her trance. She turned to see him looking at her wide-eyed and deranged.

“Shhhhhh,” he hissed. An unmistakable shriek pierced the silence.

The warmor staggered towards them from the southern horizon. It seemed somehow faster than the others, or perhaps Juan and Nanse were slower. They diverged from the path enough to be safely out of its radar, but the warmor diverged too, advancing towards them. They had been detected. The other warmors wouldn’t have seen them at this distance, but this one was better. It came so close they could hear the cranking of the gears as its limbs moved. It tilted its head up sharply, letting out another booming metallic howl. ​They pick up these things, ​Nanse thought, ​if you program them to be too much like life. They start thinking they are life.

The Militia must have built the superior warmor to guard The Network. They were close. But in momentary exhaustion, Nanse collapsed. She could hear the warmor approaching behind her as she struggled to pull herself up. Juan darted to Nanse, dragging her with him in a chaotic run. The warmor’s head darted back and forth, but it was unable to track their changing directions.

In the little time they had bought themselves, Juan and Nanse stopped to catch their breath.

“Aurora,” Juan whispered. Nanse looked up at the glowing sky. ​So we’ll freeze to death under the Northern Lights, she thought, ​not the worst way to go. ​And then she paused, looking back at Juan, who seemed to be making the same realization she was. You couldn’t see the aurora through the soot. This was the electric glow of The Network.

A deranged, almost sinister smile broke out on Juan’s face. He yelled as loud as he could and ran towards the glow. The warmor shrieked and turned, staggering towards him. Nanse moved weakly towards Juan but couldn’t catch up. What was he doing?

Then she saw The Network, extending from the ground like a massive snake with Juan on top. The warmor came closer and faster, making strange metallic growls like a radiator. Juan laughed softly and then broke into a wild cackle.

“No,” Nanse’s voice faltered as she tried to call to him. He laughed louder at the warmor, as if he was challenging it.

“Juan!” Nanse yelled again. He only glanced at her, still laughing, and nodded. The warmor's mouth thrashed, biting violently at not only Juan, but The Network.

Sparks erupted fantastically, shooting current into the warmor. It screeched and recoiled, then stiffened and fell over on its side.

Nanse watched helplessly. She felt something like sadness as she walked towards the severed cable and what remained of Juan’s body. Sparks still flew weakly from the cable, but the initial shock had been enough; The Network was broken, the warmor was dead. Nanse fell to her knees.

​It’s over. This part is over.