Scientists and communicators agree — STEM needs an ‘A’ for art 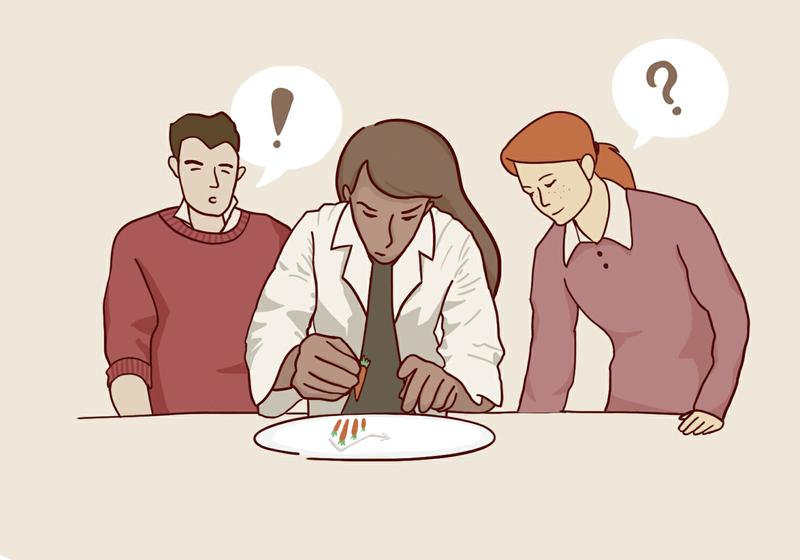 In everyday conversations, scientists can use engaging visuals to communicate research to lay audiences. Shavonne Yu

On the evening of Galileo’s 454th birthday, students, educators and alumni of UBC and other institutions gathered in the Macmillan Space Center for a panel discussions titled “Saving Science in Fact-Free Times.” The ducks of Vanier Park sat still in their ponds, unaware of the impassioned discussion taking place nearby.

Organized by the UBC Faculty of Science, the February 15 event was moderated by assistant professor and science communicator Dr. Jennifer Gardy, who led a panel of four other scientists and communicators. On the panel was Koby Michaels, the founder of The Ubyssey’s science section; Michael Unger, an educator of astronomy at the Macmillan Space Center; Peter Klein, an associate professor at UBC’s graduate center for journalism, and Julia Amerongen Maddison, a PhD candidate in environmental studies at the University of Victoria.

The panel members discussed how they are reaching out to encourage science literacy among their audience and in their communities, what others can do to promote scientific thinking and why doing so is so important today.

In 2014, A Pew Research Center Poll sought to find statistics on the gap between public opinion and scientific consensus in the US regarding various issues. A small discrepancy existed in certain areas of scientific discussion, such as the value of American investments in the International Space Station — 64 per cent of the public thought it was a good idea while 68 per cent of scientists agreed.

However, other topics of scientific research illustrated striking discrepancies, reinforcing why public conversations on science literacy and communication are so important in the modern era.

Like the sitting ducks outside of the Space Center, many people — even those in developed regions of the planet — are removed from scientific conversations and are vulnerable because of it.

“The ‘If I can’t see it, it’s not real’ mentality is the basis for science,” said Unger, “but that’s just the very first step. You have to go further.”

At the beginning of the night, Gardy presented a slide depicting celebrity “anti-vaxxers,” tweets by “flat Earthers,” misleading articles masquerading as peer-reviewed studies and a tweet by the 45th President of the United States accusing China of creating the “concept” of climate change.

“I’m not even gonna get started on that last one,” said Gardy. The audience laughed uneasily.

The concept of global warming was created by and for the Chinese in order to make U.S. manufacturing non-competitive.

The task of improving science literacy holds weight in many facets of society. Politics, education, arts, culture, spirituality and modern approaches to science itself were continually mentioned by the panelists as each sharing a role in encouraging public adoption of a critical, scientific mindset.

Maddison presented a three-dimensional, interactive model of a basic ecosystem and used it to emphasize art as a bridge between the lab and the world around it. Physically tangible scientific presentations, said Maddison, are a great way to reach the public by acting as a means of connecting statistics, formulas and jargon-dense conclusions with something not often associated with such things: visceral, artistic captivation.

For many, science can sometimes seem like a pill — important, but hard to swallow. Art, in the view of the panelists, can act as the water. If combined effectively, that water and pill can become more inviting.

Maddison’s presentation would be the first lesson in something that was repeatedly stressed throughout the evening: in order to help STEM grow and thrive, one should incorporate an “A,” for art into their scientific outlook, creating STEAM. A critical outlook that combines creative expression for purposes of appeal without compromising scientific conclusions is vital for the promotion of science.

“A compelling narrative can help get a journal published or get an experiment funded,” said Gardy.

“If you’re a science student,” said Michaels, “take an English class, take a film production class. Learn the ways of storytelling and integrate it with your studies in order to get people excited about science.”

Klein stressed the equal importance of the artist’s role. More artistic individuals should learn the basics of modern science so as to be at least scientifically literate, at which point they can weave the once seemingly disparate threads of arts and STEM into a single tapestry of truth and beauty.

The discussion on STEAM paved the way for another topic: science as an attitude.

Klein, a journalist, at one point casually mentioned that he was not a scientist like the other individuals on the panel. Those beside him swiftly rejected his sentiment. You are a scientist — the panelists made clear — as long as you think skeptically and critically, withhold judgement and have a respect for conclusions backed by hard evidence and no agenda other than a desire to know more about the nature of the universe in which we live.

Unger emphasized the impact of the Macmillan Space Center’s “Carl Sagan Night,” as well as the legacy of the man after which it is named. He described how some of his associates questioned the importance of such an event. But, during the event itself, some visitors came up to Unger and asked him about “flat-Earth” ideas.

“I told everyone,” said Unger, “this is why we need a Carl Sagan Night.”

He also discussed the stigma surrounding the words “I don’t know,” saying that not knowing something within a scientific mindset is exciting, not shameful or daunting. Not knowing is the recipe for curiosity and, by extension, discovery.

Michaels concluded by bringing the conversation back down to Earth. He highlighted that while the evening’s conversation had gotten pretty global and conceptual in scope, real change happens at the personal level. At the dinner table, reiterated Michaels, is where you have a genuine opportunity to convince someone that science is worth paying attention to.