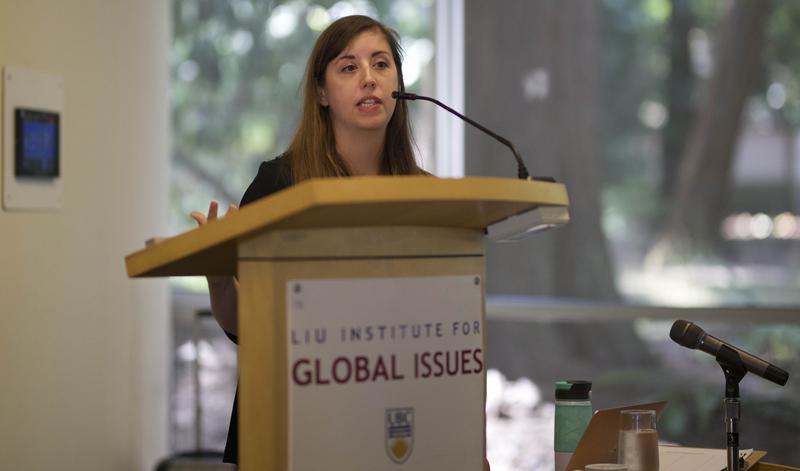 “If anybody is going to push back on this, it needs to be us.” James Vogl

In a world where heads of state hold press conferences with the aid of obviously inaccurate weather maps, it seems science plays a dishearteningly small role in policy-making.

But Executive Director of Evidence for Democracy (E4D) Dr. Katie Gibbs described in her September 4 presentation at UBC, “Science in the Age of Misinformation,” that while there is still progress to be made in Canada, the relationship between science and government is not all a bad-news story.

Gibbs co-founded E4D — a non-profit science advocacy group — after becoming increasingly frustrated at seeing her work and that of her colleagues being left out of decision-making processes by the Harper government while completing her PhD at the University of Ottawa.

“Policy-makers were not seeing my science, much less using it,” she said.

The original mission of E4D was to help members of the scientific community build the capacity to become effective political advocates for evidence-based decision-making. Since its inception, however, E4D’s activities have expanded to include organizing advocacy campaigns and conducting research about the intersection of academia and policy.

Gibbs’s presentation focused on three key markers of a healthy relationship between the scientific community and government: government funding for science, the integrity of science communication and evidence-based decision-making.

Under the Trudeau government, according to Gibbs, there has been some improvement with regards to government funding for science. The 2016 federal budget included increased funding for granting councils and that same year the government commissioned a Fundamental Science Review (FSR) to present recommendations on how it can better support Canadian scientific research.

Despite initial enthusiasm surrounding the FSR, however, it took a concerted effort from science advocates to pressure the government into implementing the final report’s recommendations.Even then, expanded funding allocations in future budgets only amounted to around 60 per cent of the FSR recommendations.

Funding for government-conducted science has also still not returned to 2011 levels, when it was cut by the Harper government, and members of many departments feel they lack the necessary funding to meet their mandates, said Gibbs.

Similarly, on the issue of science communication integrity, Gibbs highlighted important improvements the Trudeau government has made, but stressed that progress has not been uniform.

Among the most significant improvements are changes to the collective agreement between unionized government scientists and their employer protecting their right to speak freely about their work.

“This was really huge because that is pretty ironclad, even more so than having a new law or a new policy in place,” she said.

The government has also changed departmental policies to further enshrine the principle of transparent communication, but the details of their implementation are yet to be seen.

Gibbs underlined Parks Canada as an example of a department that continues to prevent scientists from speaking freely despite the progress that has been made and many media sources and top members of government hailing the “unmuzzling” of Canadian scientists.

Evidence-based decision-making has also been a mixed bag under the Trudeau government, said Gibbs.

It has made good use of scientific evidence in legislative moves like the overhaul of the Fisheries Act, but in others it has still proceeded largely without input from the scientific community.

Gibbs stressed the fact that while the Trudeau government has made improvements on these three key markers, this progress was not automatic and is insecure given global political trends like the rise of populism.

“While we have been making some substantial progress over the past four years, you have to also take that in light of what’s happening in the US and the UK, for example,” said Gibbs.

When it comes to what individual members of the scientific community can do beyond advocating for policy change, Gibbs said one of the easiest ways to make an impact is combating misinformation. Whether it’s correcting misinformation when they see it or taking responsibility when they have inadvertently spread it, if scientists can nip “fake news” and “alternative facts” in the bud at a constituent level, it will be that much harder for politicians to ignore evidence when making decisions.

“As researchers or people who value scientific evidence, if anybody is going to push back on this, it needs to be us.”