Scientists and artists alike are fascinated by the psychological phenomenon of pareidolia.

By Marissa Birnie  ·  Aug. 15, 2017, 12:51 a.m.
Scientists and artists alike are fascinated by the psychological phenomenon of pareidolia. Rob Scharein and Laura Lee Coles

Have you ever looked at an inanimate object and seen a face that wasn’t really there? If your food looks terrified and your mop is giving you the stink-eye, don’t worry — you’re not crazy. This psychological phenomenon is called pareidolia, and it is one of your brain’s natural responses to a stimulus.

Two local artists are exploring pareidolia in the rock “faces” of Hawaii’s lava fields. Rob Scharein and Laura Lee Coles’ Faciem Terrae, or Earth Face, will display during the Richmond World Festival on September 1 and 2. Scharein and Coles are two of several artists-in-residence at the West Point Grey Community Centre.

The interactive experience that pareidolia provides for spectators of their work is of great interest to the pair.

“We felt that the theme of pareidolia is unique,” said Coles. “I find that the patterns and the flow of the lava are very contemplative and meditative. What I’ve observed when people look at my lava installation is that they’ll sit, sometimes for a very long time, and just watch the different patterns. People will say, ‘Oh look, I see a face.’”

Pareidolia is a mostly universal experience. In fact, our brains are wired to see faces where they wouldn’t normally be.

According to UBC cognitive psychology professor Dr. Todd Handy, pareidolia is a critical component in our evolutionary survival.

“We have a lot of specialized processes in our visual cortex. Faces are very evolutionarily salient things for humans to process because we’re very social creatures,” he said.

“We need to individuate [to understand others’ emotions], so faces are a rich information source about who we’re dealing with and what their moods are,” he said.

Our brains have processing regions in the temporal lobe — the area of the brain responsible for handling visual information — that are specific for processing faces. Damage to this region can result in prosopagnosia, or face blindness.

“If you damage those regions, you can still see faces. You just don’t know who you’re looking at,” said Handy.

When the regions are working normally, “we’re so intent on seeing faces that we just see them everywhere. Faces are really important for us as a social species so that’s why we give them special credence, neurologically speaking.”

Faciem Terrae is an interactive digital display and the result of months of fieldwork in the lava fields of Hawaii Volcanoes National Park and the dormant volcano Mauna Kea. The decision to document pareidolia was the result of Scharein’s lifelong interest in volcanoes and Coles’ previous exploration of lava fields in her work.

“The landscape of [the fields] is very lunar and very off-world, if you just stand there in that. It’s warm. It’s hot. It’s windy. If you close your eyes and don’t think you’re on the planet earth, you can be anywhere, [like] Mars,” said Coles. 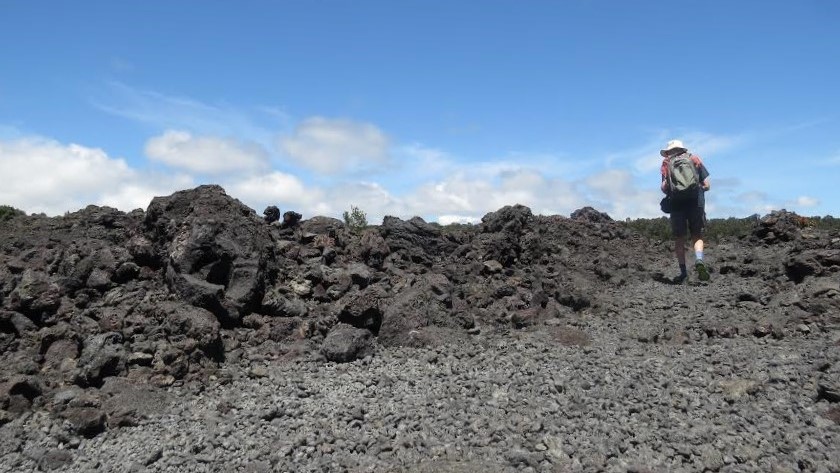 The unique and varying rock landscapes — from wispy Pele’s hair to the burnt, marshmallow-like pahoehoe and razor sharp a’a — result in plenty of opportunities to experience and record pareidolia.

The face of Hawaiian goddess Pele has even been spotted in the island’s eruptions, gases and rock formations.

“Some of these faces are really creepy, but it’s not meant to be scary,” said Coles. “We’re just showing the faces as we found them.”

The rock faces will be transformed into stereo-pair images and anaglyphs, creating a 3D effect to add depth and facilitate interaction with the work.

The artists are working on ways to incorporate further interaction by extracting the spectator’s face and placing it within the 3D work, explained Scharein. Their hope is that when someone is looking at the digital displays, their own face will merge with the face seen in the rocks.

Merging the spectator with the digital piece is a way of understanding spatial embodiment, the way people move and how a person situates themselves in nature and in space, which are all key interests for the artists.

Interactivity also enhances the reach and playfulness of the art.

“We’re trying to get that interplay that happens when there’s that moment of sensory interaction. It’s socially interactive because their friends are laughing and family is there. I think the trend you find in digital art installations sometimes is that they’re not just all about the artist … our arts practice is about extending into the community,” said Coles.

Coles believes that interactivity between the spectator and their work “democratizes” the art: art, like democracy, is not a spectator sport.

Faciem Terrae reminds us that when we see a face in a digital display of a rock formation, we are in fact seeing the workings of our brains reflected back at us. The quick flips between being engrossed in the rock faces and recognizing that rocks don’t actually have expressions are exactly what the two artists are aiming for.

Scharein and Cole, like the rest of us, are fascinated both by nature and our place in nature.