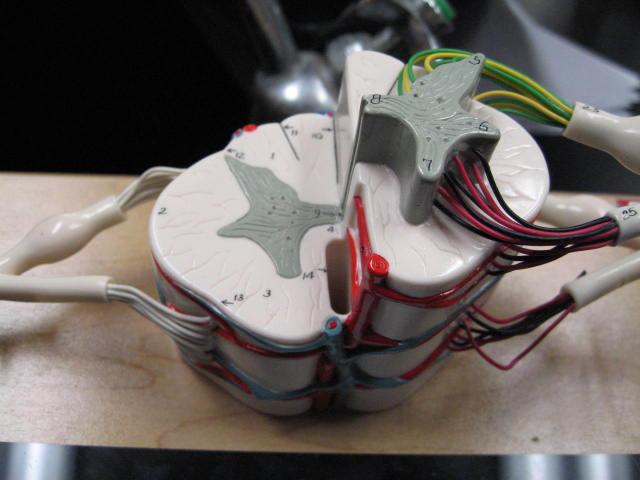 Spinal cord injuries are well-known for causing debilitating motor impairments, with new research being developed regularly to help patients regain movement. What many don’t realize however, is that spinal cord injuries also impair bodily functions that are automatic, such as blood pressure.

A new case study published in the Journal of the American Medical Association by Dr. Andrei Krassioukov, professor in the UBC department of medicine and corresponding author on the paper, explores an experimental treatment to improve the unseen impairments in patients with spinal cord injuries.

The study focused on a patient who had a spinal cord injury at the fifth cervical vertebra, resulting in complete motor impairment below the injury. On top of the impaired movement, the patient also experienced impaired autonomic body functions, including problems with blood pressure and bowel functioning.

Krassioukov and his colleagues were particularly interested in helping patients who experience unpleasant dizziness when doing the most mundane of activities — changing from lying down to a more upright position. These patients unfortunately have trouble maintaining a functional blood pressure when switching positions from prone to upright, leading to vertigo, but the researchers wanted to find a way to alleviate the unpleasant symptoms.

The experimental treatment used in the study is an electrical stimulator surgically implanted under the skin in the lumbosacral junction of the spinal cord. The stimulator is then activated by a remote that can be programmed with different settings to provide stimulation for specific tasks to different areas of the spinal cord that are still intact.

“In reality, many patients with neurologically complete injuries have silent, totally functioning connections within the injured spinal cord,” said Krassioukov.

To determine whether the implant could improve cardiovascular functioning, the patient was tested using a tilt table, which can be changed to varying degrees and simulate going from lying down to an upright position. The patient’s blood pressure was measured throughout the change in tilt both with and without the stimulator active.

“We found parameters that could activate the spinal cord, and therefore specific neurons, that will result in the activation of blood vessels in the periphery and the vessels will vasoconstrict without activating motor neurons,” said Krassioukov.

A key point in the findings was the lack of activation of the patient’s muscles. By having no activation, the change in blood pressure was due to only the constriction of blood vessels in response to electrical stimulation of the corresponding neurons, and not the contraction of muscles putting pressure on surrounding blood vessels.

The technology to help maintain blood pressure and other autonomic body functions has the potential to vastly improve quality of life because patients would be able to complete daily activities without being impeded by dysfunctional systems.

The case study is the first Canadian patient to be implanted with the device, but other patients have been similarly tested in cities across the United States. Although the results of the study are promising, further research and clinical trials will need to be conducted before the implantation can become a standard treatment.