Study: Stoner stereotypes may be true, rats on THC are lazy 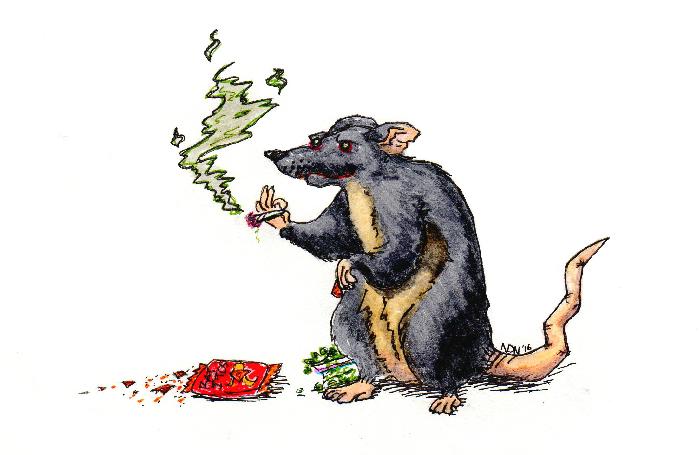 You know the type — unmotivated, lazy, no work ethic, stoner. Now there might be some evidence to support the stoner stereotype — at least in rats.

Research from Catharine Winstanley, a UBC associate professor in the department of psychology, and PhD student Mason Silveira, who conducted the research, showed that rats who were under the influence of THC — the psychoactive chemical in weed — were “cognitively lazy.”

The researchers trained 29 adult male rats to play a game in a “rat arcade.” The rats had two choices, an easy one (for one delicious, sugary rat snack) and a hard one (for two delicious, sugary rat snacks). The rats were more likely to do the harder task for the extra reward when sober, but when they were high on THC they tended to choose the easier task and win the smaller prize.

“It’s well known, anecdotally, that consumption of marijuana leads to a so-called ‘stoner phenotype,’ — someone who is not super aggressive about pushing ahead in life, maybe not fulfilling their potential," explained Winstanley. “This is the first scientific, unbiased study to show it."

The researchers gave the rats several different cannabinoids (chemicals in cannabis), but it was only when the rats were under the influence of THC that the researchers noticed the rats choosing the easier task. This finding suggests that it is the THC in marijuana that leads to the cognitive laziness and not the other chemicals in pot.

The study does have its limitations, though. The research was only carried out on 29 adult male rats and each was only given a dose or two of THC. The findings support the idea what THC causes laziness, but are far from proving it.

The researchers wanted to expand the study and look at effects chronic THC use had on the rats but were limited by the rules surrounding research on drugs like marijuana.

“It was very difficult to get hold of the THC. That’s going to be an ongoing problem into research of this drug. It’s not easy to source in Canada and we didn’t have enough to do the study the way we wanted to do it which would have been to look at chronic administration,” said Winstanley.

Health Canada monitors research on elicit substances. Researchers need to apply for an exemption to obtain the drugs and each time they need to order more or switch vendors they have to reapply. Health Canada also monitors the value of the drugs researchers have and the security around the drugs to determine how much they are allowed to have.

Winstanley hopes that as legal restrictions around marijuana are loosened, research will become easier to conduct.

The team hopes to continue to study the drug in rats and want to test the chronic affects it has on cognition.

The team also found a relationship between the number of receptors that THC uses in an area of the brain called the anterior cingulate cortex and how lazy rats were. The more receptors a rat had, the lazier it was. Winstanley said that “all the blocks are lining up,” which makes the team think that the anterior cingulate cortex may be responsible for THC’s laziness effects.

But for now that remains an unanswered question.

“People need to have this information at hand and make an informed choice about whether they want to use the product,” said Winstanley. “We aren’t pro- or anti-marijuana. We are just doing the experiments.”