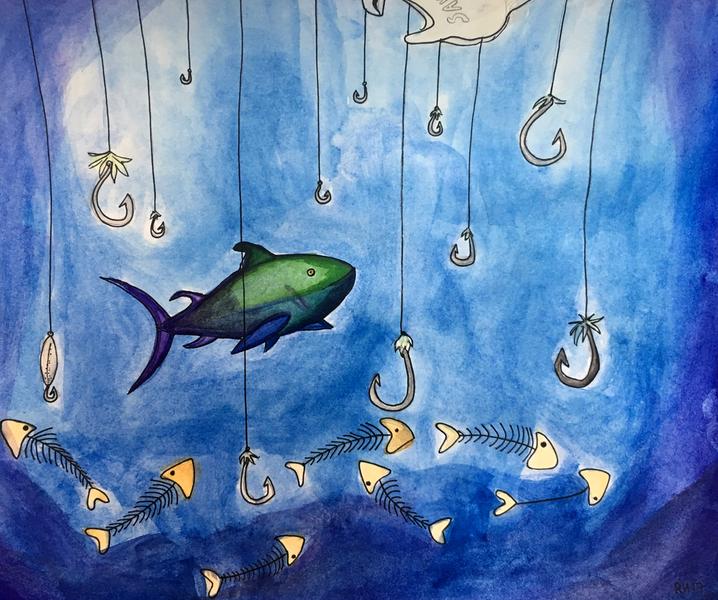 With an abundance of sushi joints on campus and over 600 sushi restaurants in Metro Vancouver, it’s safe to say Vancouverites never have to stray far for the popular seafood dishes. However, the curious folk who wonder about the environmental impact of eating sushi should brace themselves for the news — it’s time to reconsider eating sushi on a regular basis.

So what makes sushi environmentally unfriendly? Seaweed is off the hook — it’s relatively sustainable and has a negligible carbon footprint. While rice cultivation does generate some greenhouse gases, it’s not enough to warrant serious concern. The problem with sushi is the fish. Overfishing of the world’s oceans is pushing fish populations to the brink of collapse.

Dr. Dirk Zeller, senior scientist and executive director of Sea Around Us, a UBC research initiative that assesses the impact of fisheries on the world’s marine ecosystems, said that global fish catches peaked in the 1990s and have been declining ever since. Unfortunately, this decline is not the result of policy coming to the rescue to regulate catch quotas, but is simply due to fewer fish being in the ocean.

Zeller and his colleague, Dr. Daniel Pauley, found that fish catches between 1950 and 2010 are far greater than global records show since small-scale fishing, illegal fishing and discarded fish are rarely included in global catch reports. Zeller and Pauley’s data also show that declining fish catches are much more severe than records suggest.

“We are far too obsessed with eating seafood in the developed world,” said Zeller. “Seafood should only be an occasional and small addition to our diet. Our recent fad for sushi in the west — a rich man’s consumerist fad — does not help, although the majority of sushi grade tuna is eaten in Asia.”

“If you do go and eat sushi — better not more than once per month — stay away from the expensive tuna cuts such as bluefin and bigeye; stick to yellowfin or even better, Pacific skipjack,” said Zeller. He recommends opting for non-tuna sushi such as mackerel, or marine invertebrates like clams or octopus.

The collapse of global fish populations has been a long time coming and the consequences are dire. The advent of steam trawlers in the 1870s rapidly led to local depletion of stocks in waters around developed countries, so fishers moved into broader territory.

“Virtually all waters around the world are being fished by industrial fisheries,” said Zeller, highlighting that many developing nations are feeling the effects of depleted fish stocks.

“The vast majority of fish eaten in the developed world is imported from elsewhere, not fish caught in our own waters. We as consumers in the developed world need to ask ourselves if the piece of fish we are about to eat has been taken out of the mouths of hungry and poor people in Africa and parts of Asia.”

Zeller advises avoiding imported fish, especially if it is imported from a developing country. People should also be inquisitive when buying fish from local vendors.

“Consumers need to inform themselves,” said Zeller, who said to ask vendors which fisherman or company caught the fish, where exactly the fish was caught and how the fishery is managed. “Avoid trawl-caught fish, and favour line or trap-caught fish. If the vendor does not have full and ready answers to the questions, don’t buy there.”

Giving up fish altogether may be the best way to go, but there are options for those not quite ready to say goodbye.

“If local fish are caught in an environmentally sustainable manner, there is no reason not to eat it. The question then becomes ‘is that [sustainability] logo really sustainable?’”

Although Zeller does not claim expert status in sustainability labels, he suspects some labelling systems are marketing gimmicks since the criteria for sustainability can vary from one organization to another.

“The focus should be on local products and a good local system of labelling that has good credentials.”

Ocean Wise, a program started by the Vancouver Aquarium in 2005, evaluates the sustainability of seafood suppliers based on their methods of harvesting and the abundance or resilience of the population. However, Ocean Wise does not indicate where the product is from, so it is best to check with the vendor, armed with Zeller’s advice.