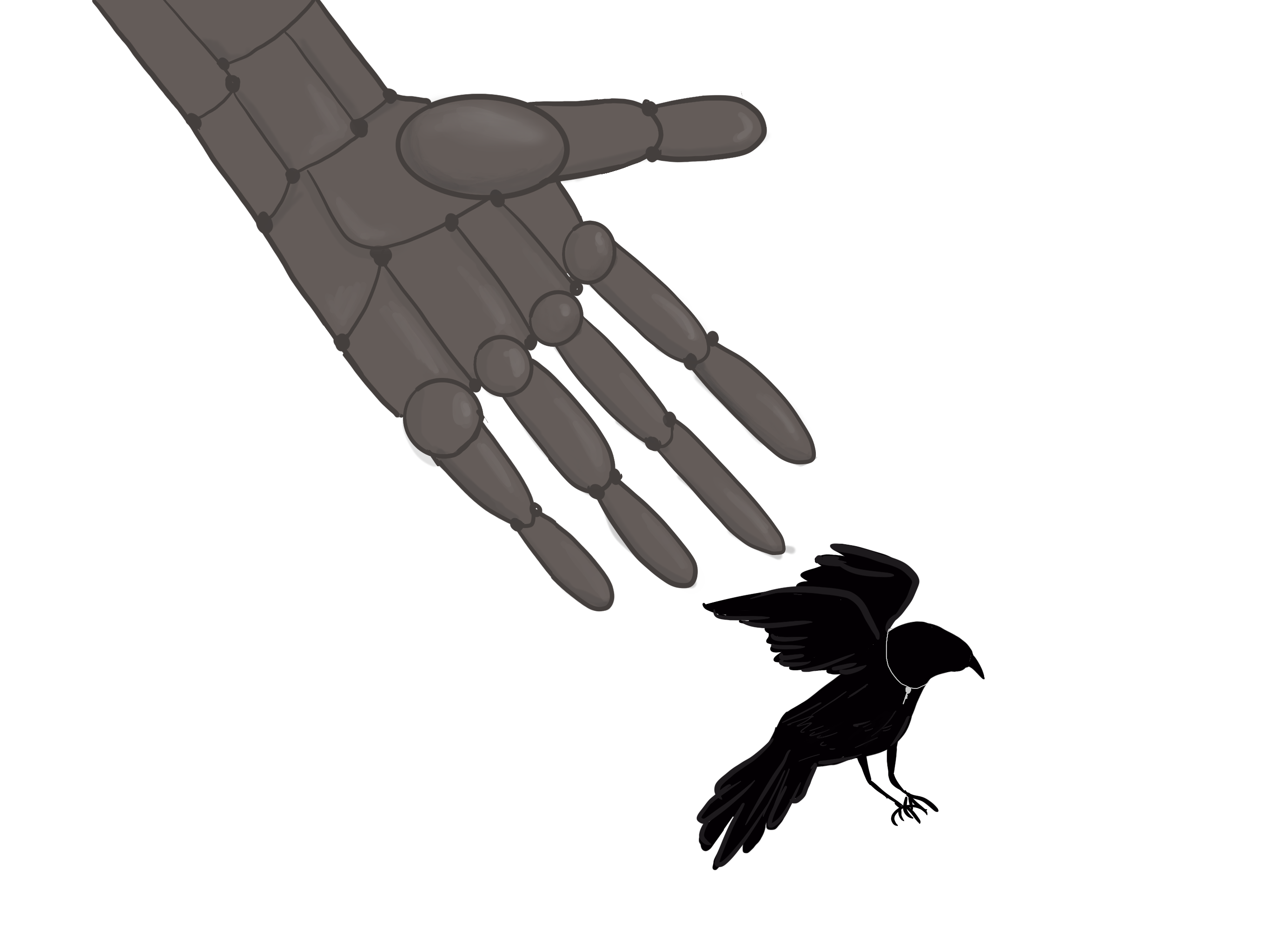 The bird stares back up at us, but with that dead, shiny look.

The bird stares back up at us, but with that dead, shiny look. I pull Sam away ‘cause he’s fixing to touch it with his chubby little hands.

A halo of dark blood around his head, that’s all.

I crane my neck. The sky’s burning blue but I can’t see any birds up there. Just black spots when I stare into the sun. Papa said I’ll go blind doing that. Then I’ll see black spots and nothing else, forever.

The sun’s hot and dripping in our eyes. My hair’s already dry, though we just came from the pond. We gotta go slow, ‘cause Sam forgot his boots and won’t go back to get them. Now the rocks bite at his feet and make them bloody.

Sam’s poking at the feathers with his toes. They look nice and soft but they smell like burnt rubber. The cicadas haven’t stopped screaming since the bird dropped on the ground in front of us and died. Sometimes the sound makes me want to curl up under my blanket and scream. But most of the time I like it.

“Linda! Look, there’s more of them! They’re all falling.”

A flock of birds near the edge of the field, raining down. Sam breaks away from me and I follow him through the giant, rubbery stalks. Now that we have Crop-Bots, the wheat gets bigger and bigger every year. One day it will cover up the whole sky and we’ll never find our way home.

I find Sam and he’s picking up the birds and putting them in a pile. “This one’s dead. And this one’s dead.” They’re everywhere. All over the yellow field. Like their wings all stopped working, or something.

“I’m tryna find the alive ones.”

The sun drips off my skin, hot and sticky. “Let’s go home, Sam. We gotta tell Papa there’s dead things in the field.”

I can’t see the house, only smoke billowing up from the stacks. We follow the white veins towards home. Sam doesn’t say anything but I can hear him following behind me, panting in the sun like a sick dog. His feet probably hurt but it’s his fault for leaving his boots. The other kids were being nasty to him. If I were him I’d have thrashed them, but Sam, he just ran away.

Maybe I should carry him. When I turn around he’s got one of those damn birds in his arms again.

“Hey! I told you not to touch them!” I lunge at Sam but he crouches down, curling his body around the bird so I can’t get it.

“But he’s alive a little bit. Look.” He moves his elbow and I can see a small watery eye in the knot of his arms and legs. Black with a ring of white all around, then black again. I straighten up lightning-quick cause I can hear a dull whistling in the air over the screams of the cicadas.

Me and Sam spy it the same time, bent over Sam’s pile of birds.

The bot straightens up — sun pouring off metallic arms and legs. I think it’s surprised we’re even talking to it. There’s isn’t much reason to talk to something without a mouth.

It stops in front of Sam, reaching a giant hand towards his chest — two long fingers and a thumb. Sam lets the bird slowly roll from his arms. The Bot traps it in the iron cage of his hands. It’s not that unusual for a Crop-Bot to clean dead things out of the field, but I get a funny feeling.

It starts pushing inwards with its thumbs.

“Stop!” I’m so startled I start screaming my head off. “What’re you doing?”

The bot looks at me from somewhere deep in its lifeless metal head. The force is too much for the bird’s delicate little bones. The flesh starts to separate under its fingers.

I feel my heartbeat in my arms, knocking. Counting the footsteps home. But I can’t stop watching. A silvery knob in the centre of the bird’s chest, that the Bot grips between finger and thumb.

It starts to twist. One, two, three, four turns.

Then he throws the bird into the air.

A rustle of wings. Beating shadows. Sam starts laughing. The bird twists and turns in the sky, flapping crazy, sailing. 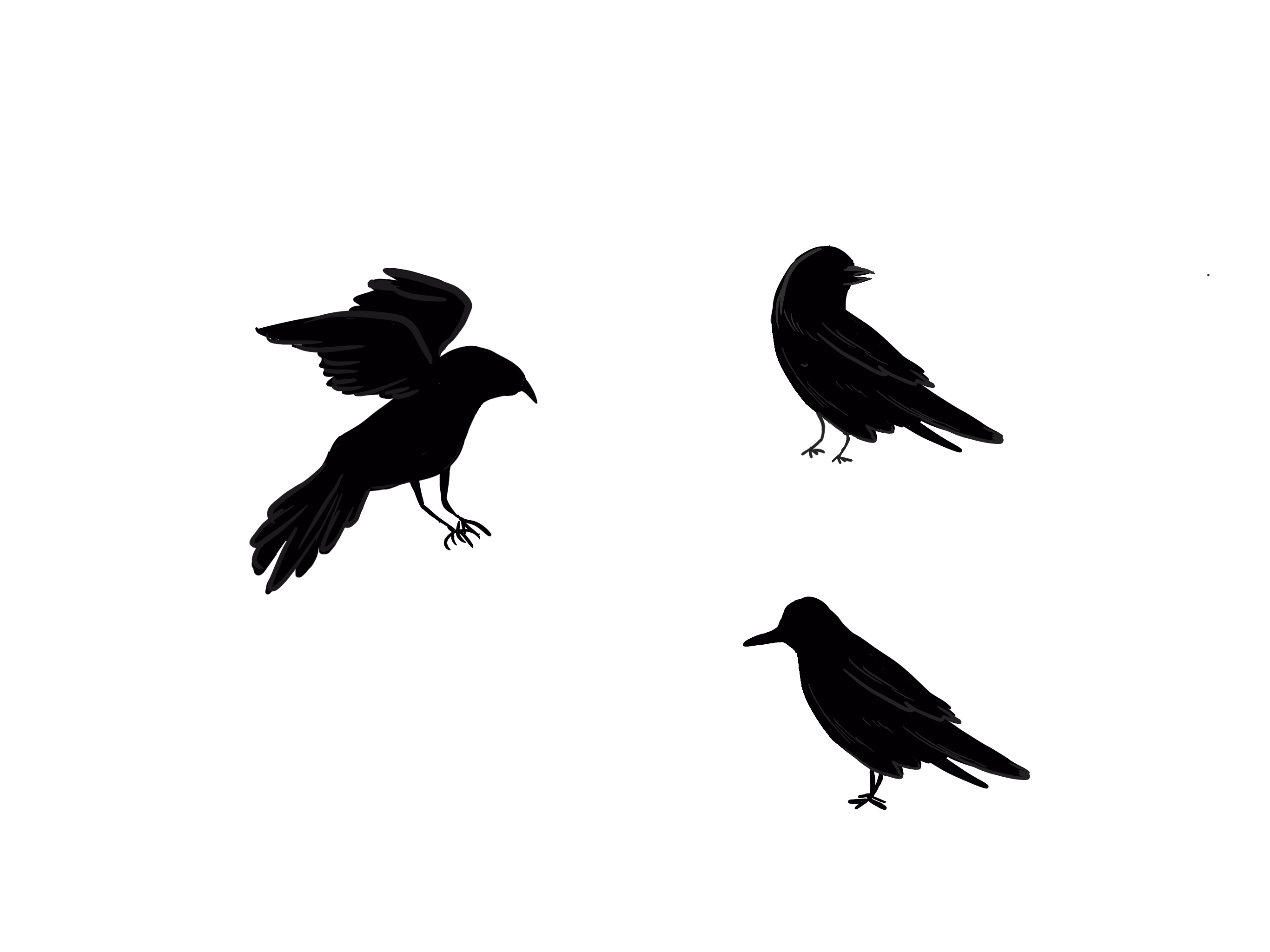 The Bot wags its head from side to side. It moves on to Sam’s bird pile, hands rusty with blood as it releases more birds into the wind.

“I wanna try!” Sam cries. “Gimme!” He rips the last bird out of the Bot’s hand and plunges his little fingers into its chest.

I get a funny taste in my mouth, watching him do that.

Why didn’t Papa tell us about the wind-up birds? We know all about the super-wheat. Rocketship corn, tomatoes the size of my head. We all gotta eat. Papa always tells us we’re the luckiest kids in the world. But why the birds?

“Where did all the real birds go?” I ask.

“What d’you mean, Linda?” Sam asks. He still has that stupid, delighted smile dripping down his face.

“There were real birds here, once. I know it. We used to feed them at the pond! I remember, you found a blue Robbin’s egg once, Sammy, nestled at the foot of a corn stalk.”

“I can’t remember.” Sam starts twisting the little gear in the bird’s chest.

“You were too little. It was before we re-irrigated, when the wheat only came to my waist. We brought the egg home and put it under a white-hot lightbulb.”

“So it could hatch, stupid.” I wonder if the robot has a little gear too.

“But what happened to it?”

“Well, we convinced Papa to buy us all this stuff for it. Lights, expensive birdseed. A cage with a little pink swing.” I watch a kaleidoscope of ants twisting at my feet.

“Well, I stayed up all night waiting for it. But it never hatched. For weeks and weeks. I just wanted to hold it, make it warm with my hand. But one day, while I was playing with it, I dropped it on the floor. I saw the little body inside, and the skull. Like it was covered in glue.”

I cried and cried that day. Would I always be so careless and selfish? Papa always tells me that I don’t appreciate all we have. All of humanity’s achievements, leading up to my life right now. He says I’d just cry it all away. Drown the whole world.

“Why do the wind-up birds have blood, Linda?” It’s all over his hands now.

“Maybe they used to be real birds.”

Sam smiles full of teeth. The bird starts flapping its wings in his arms, fighting to get loose. He finally lets it free. “Papa fixed them, so that they’ll live forever.”

All of a sudden I feel sick, the cicadas screaming and screaming all around. I start patting my body everywhere, tearing at the skin like a rabid animal.

I don’t answer, just keep scraping and scratching, running my fingers against my neck, and chest.

I push past the Crop-Bot deeper into the field. Already my skins stings. Sam’s crying now, his face melting in the hot sun.

I try to shove Sam off but he jumps on me like a wild monkey, not letting go. We tumble into the dust. A mess of elbows and legs. I let my body go limp and watch the fingers of smoke curled up against the sky.

It was only a bad thought.

I wind it up and let it float away.

I can hear Sam snivelling beside me. I almost forgot he was there. He’s so small, just like the chubby little angels in cartoons. Papa’s gonna kill me.

“Sorry for scaring you,” I say. His feet really are bloody. I feel bad for making him walk so far. My dress is already ripped, so I tear a piece off to wrap it around his little feet. He watches me out of big dark eyes, cheek to dirt, thinking I’m gonna go crazy again any second.

I brush the dirt out the bloody flaps of his soles. I’ll think of some way to make it up to him. I’ll carry him the whole way home without even taking a break. I feel much better thinking about how I’ll take care of him.

When I find it, it’s tucked into his sole, halfway between his heel and toes.