If there remain any naysayers of evolution, we have measurable proof of its development right here on the UBC campus.

Dr. Dolph Schluter, UBC professor of zoology, has been working with a biological system of threespine stickleback for over two decades, providing insight on the stages in which evolution occurs and contributing to our knowledge of species diversity.

Schluter’s lab has access to 20 experimental ponds located near the Centre for Comparative Medicine. Each pond measures 25 metres by 15 metres and are shallow at one end, sloping down to six metres at the deepest. 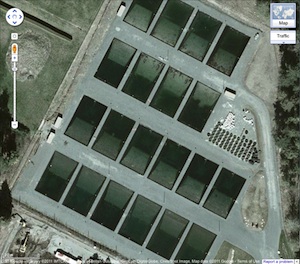 “The reason why I work on stickleback is because I’m interested in the origin of species — how new species form and how they become different from one another. I’m especially interested in the role of ordinary adaptation to environment,” said Schluter.

The evolution between the two species has happened fairly quickly, and has occurred independently more than once in similar situations.

“That might not sound like a lot, but these lakes are only about ten thousand years old. These species are only found in these lakes, so they represent some of the youngest species on earth,” said Schluter.

The bodies of water that house two separate species of stickleback are similar in that they are all coastal lakes that were submerged at the end of the ice age. As the weight of the ice was removed, the water from the sea eventually became the small freshwater lakes that are the homes of the pairs of stickleback.

“What we’ve shown is, even though these species have originated separately several times, if you take one of the open-water dwelling males from one lake, and a female from another lake, they’ll mate with almost the same probability as a male and a female from the same lake. So the traits that causes them to prefer to mate with their own kind and prefer not to mate with the other kind in the same lake — these traits have evolved repeatedly,” explained Schluter.

That the open-water stickleback and the bottom-dwelling stickleback will not interbreed, though they inhabit the same body of water, is a litmus test for whether the two constitute separate species or not.

“There is much more known about the genes than when we first began,” said Schluter, “and it is now possible when we do experiments to actually track changes and measure evolution across a generation.”

In these lakes, the stickleback usually have one predator, the cutthroat trout, and no other fish species occur in the lake. Lakes with such low diversity make them highly susceptible to invasions by other species.

“The stickleback are the most highly endangered group of fishes in the country,” said Schluter.

Sticklebacks are considered endangered even though there are a considerable number of them in the lakes which they inhabit. This is because stickleback are so fragile; any other fish species or aquatic organisms that are introduced to the lakes will affect stickleback survival.

Schluter warned that even seemingly benign species like catfish can be harmful to stickleback.

“People inadvertently or deliberately move other fish species or aquatic organisms from other lakes into those lakes that contain the [stickleback] species pairs. In the case of Hadley Lake, someone introduced catfish into that lake and there are no stickleback in there anymore. Both species are completely gone,” he said.