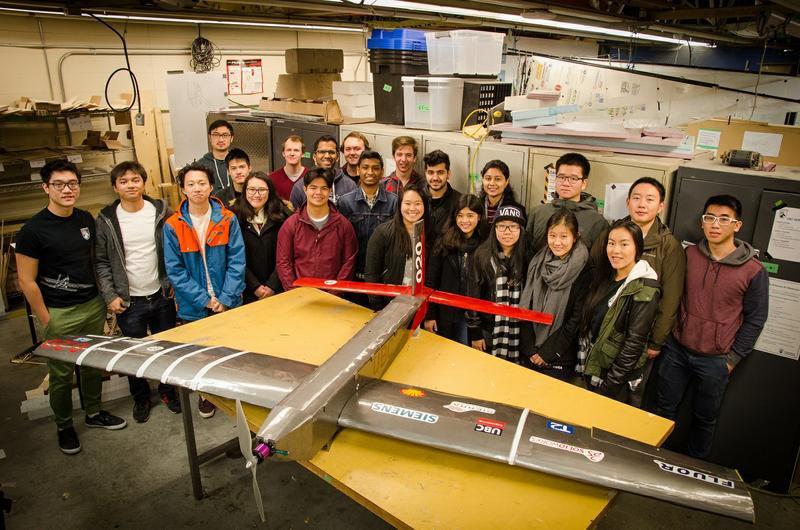 As opposed to previous team captains of UBC AeroDesign, Nicholas Hui thinks planes are only “okay” and I have to agree. Whenever I’m on a plane, legs nagging with pain, questioning why I chose a window seat again when for most of the flight there is nothing to see but the wing backdropped by an abyss, I think if only I could be on a train.

Then I remember that I’m traveling the 4,000 kilometre distance between Vancouver and Toronto to see my family — and cats — in less than four hours and admit that these flying metal tubes can be pretty close to miraculous.

But some people don’t like leaving the miracle of flight as just a miracle. For UBC students, engineering or not, that’s where the AeroDesign student team comes in. The team acts as its own classroom for students to learn how to beat birds at their own game through technical know-how of plane design aspects such as stability and centre of gravity.

No previous engineering knowledge is required to be a part of the team though. Those with considerable experience are in charge of design, but there are heaps of nitty-gritty hands-on and administrative jobs for first-year engineering or non-engineering students.

“We just want someone who has the time,” said Hui, “and also someone who can think outside the box, who can get things done.”

There may not be any exams or grades in this classroom but there is one overarching goal, namely to win the Society of Automotive Engineers (SAE) Aero Design Collegiate Series held every April in either California or Florida. Countries from across the globe take part in the SAE competition — from India to Egypt to Poland — with about 40 teams in total.

What is this respective class you might ask? There are three classes of planes flown at SAE's competition. UBC’s team currently focuses on regular class planes which are designed to carry the heaviest payload possible, but they are starting to look into building advanced class planes. These planes are designed to both carry and drop a payload to simulate dropping medical care or food or, as Hui anxiously jokes, weaponry.

The last class is called micro and these types of planes are built to be environmentally friendly. More precisely, they are judged based on their payload weight to plane weight ratio, and participating in this group is currently a further off goal for UBC AeroDesign.

Despite his nonplussed attitude toward planes themselves, Hui is very dedicated to the AeroDesign team as he sees “a lot of potential” in terms of both its growth and his own personal development as a project manager. AeroDesign is one of the few engineering clubs that is not at max capacity, thus there is opportunity for growth simply in terms of numbers.

Perhaps more importantly though, AeroDesign has room for improvement in terms of communication. The SAE judging criteria is divided into three sections: oral presentation, written report and actual performance of the plane. These three aspects simulate the full process of an aerospace project in industry but obviously on a smaller scale than something Boeing or Airbus might do.

Last year the team placed third in performance, first report-wise, but only ninth for their talk. Hui admits that “engineers are … pretty bad at presenting their work” and therefore someone from outside the faculty might come in handy to bring UBC AeroDesign from third to first overall in the upcoming competition.