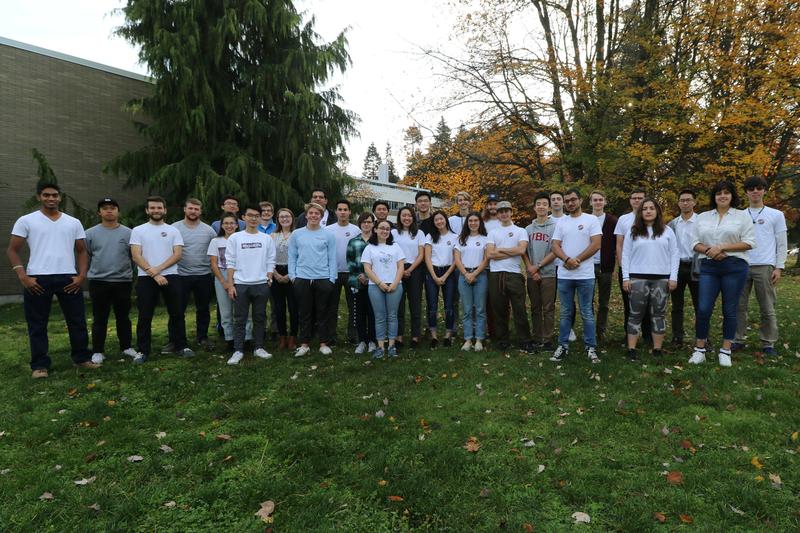 Between Saturday, May 18 to Monday, May 20, UBC Mars Colony will be hosting the first phase of their competition in the Fred Kaiser Building. Courtesy UBC Mars Colony

While science fiction movies have had us earthlings dreaming of life on Mars for the last century, projects from private companies and international space agencies could have humans on the Red Planet as early as 2024— and a team of UBC students have been preparing for that day.

UBC Mars Colony, a multi-disciplinary engineering student team, is putting the finishing touches on their airlock project, an endeavour that they have been working on since 2016.

Commonly used in aviation and submarines, an airlock is a structure consisting of two doors and a pressure vessel that facilitates the transition of people or objects between internal and external environments of different pressures. In space, airlocks allow for astronauts to leave their spacecrafts and venture into their low-pressure, low-nitrogen surroundings without comprising the air in the spacecraft.

“In the beginning I thought, ‘This is just four walls and two doors, how hard could this be?’” remarked Kyle Marquis, founder and captain of UBC Mars Colony and a fifth-year mechanical engineering student.

As it turned out, Mars’ unique atmospheric conditions posed several design challenges to the team. In addition to being functional for the unique pressure conditions of Mars, the airlock also had to withstand temperatures as low as -100˚C while maintaining its flexibility. After researching and testing various materials, the team came across multilayered metallocene polyethylene — a durable and low-cost plastic often used in the agricultural industry — for the membrane of their airlock. The team was able to present their design at the 2018 International Astronautical Space Congress (IAC) in Bremen, Germany this previous October.

“We’re doing something that very few companies, let alone universities, have ever done before,” Marquis said.

After encountering success with their own airlock project last year, Marquis and former vice-captain Han Zhang decided to establish an intercollegiate design competition to give other students the opportunity to undertake the same challenge. Schools participating in the competition, known as Project Airlock, will present their designs at UBC to a panel of judges for the chance to win prizes, building their technical skills along the way. Project Airlock began in 2018, and is anticipated to conclude in 2020.

Between Saturday, May 18 to Monday, May 20, UBC Mars Colony will be hosting the first phase of their competition in the Fred Kaiser Building. Teams from the University of Toronto, University of Waterloo, University of Regina and Memorial University of Newfoundland will be presenting papers outlining their current design plans for their own airlocks.

In addition to the airlock, new sub-teams within UBC Mars Colony are currently tackling two new projects that look into resources that would make interplanetary life sustainable. Their Sabatier fuel plant project, which began in September 2018, seeks to develop a prototype of a fuel reactor that converts carbon dioxide and hydrogen into methane, which can be used as fuel for rockets once on Mars.

Their other current undertaking, Project HELIOS, will investigate the economic feasibility of resource extractions on the moon. Specifically, they will be looking at the cost efficiency of extracting Helium-3, a special isotope of Helium that is abundant on the moon and could provide potential colonies with energy through a process known as nuclear fusion.

“There’s so much to be explored, and so much we don’t know,” said Yash Adnani, a Team Lead at UBC Mars Colony and a third-year materials engineering student. “That’s what attracted me to space exploration. I’d like to help us … become a multi-planetary species.”