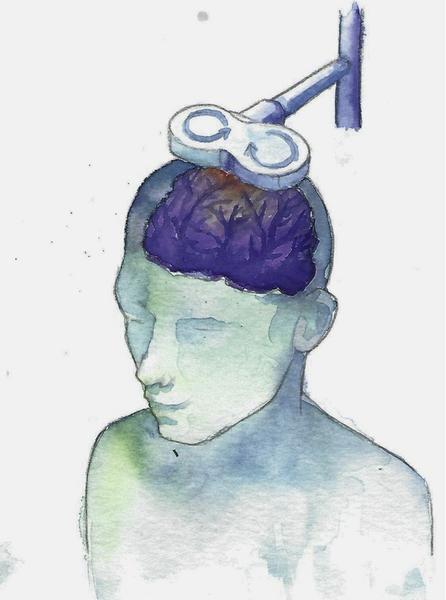 When placed on the patient’s head, the electric field generated by the coils is able to penetrate the bone and into the brain tissue, to a depth of about 1.5 centimetres. Yiyang Wang

At UBC, the Non-Invasive Neurostimulation Therapies Lab (NINET) is both studying and providing a new treatment for depression, repetitive transcranial magnetic stimulation (rTMS) — a relatively recent therapy which could be promising as a first line of treatment in the future.

The first rTMS devices were developed around 1985, and approved by Health Canada in 2002 for clinical use.

The rTMS device is about the size of a ruler, and consists of two round electromagnetic coils. When the device is turned on, an electric current flows through the coils. This current creates a circular magnetic field in rings looping around the coil. In rTMS, the current is generated in pulses, so that it is not constant over time. This means the magnetic field also changes over time. A changing magnetic field creates an electric field.

When placed on the patient’s head, the electric field generated by the coils is able to penetrate the bone and the brain tissue, to a depth of about 1.5 centimetres. Neurons in the brain are connected to each other through gaps called synapses. Signals in the brain must travel from neuron to neuron, and are transmitted using electric potentials. At the synapse, if the voltage is not high enough, a neuron can stop the transmission of a signal, or vice versa. Inducing an electric field in a patient’s brain can change the signal transmission in the brain.

Dr. Fidel Vila-Rodriguez is a clinical scientist at the NINET Lab studying rTMS in the treatment of depression, as well as other disorders such as Parkinson's disease and OCD. In order to treat depression, Vila-Rodriguez is using rTMS to target the DLPFC. While the exact mechanism is unknown, the theory is that applying electrical signals to the DLPFC will help activate and deactivate neuronal activity. Typically, a patient will receive treatment once per week for several months, with the duration of a session ranging from three minutes to sixty minutes.

Many of the current studies have enlisted patients who had resistant depression, which means they had exhausted the other avenues of treatment such as antidepressants or psychotherapy. Vila-Rodriguez would like to study rTMS as a first line of treatment, and compare this to Cognitive Behavioural Therapy (CBT), as many studies have focused on only comparing rTMS to a control group. CBT is the primary psychotherapy method used in treating depression, and is often prescribed in conjunction with antidepressants. Since these studies have shown rTMS to be an effective treatment method, it is now interesting to see how rTMS compares to other lines of treatment.

In particular, this study would focus on depression in university students. “Unfortunately, there are increasing rates of depression and suicide among students,” Vila-Rodriguez said, “I would really like for us to be able to provide clinical treatments to the UBC community.”

Vila-Rodriguez is also hoping to work with the University of California in Los Angeles on the issue of depression in university students. “I visited [UCLA], and they have a very large study that looks at depression and interventions to address the high rates of depression. We are hoping to collaborate with them and also set that up here at UBC,” Vila-Rodriguez said.

Vila-Rodriguez also posed the idea to university administration of having the treatment included in the AMS Pacific Blue Cross plan as a way of making it more accessible to students.

Vila-Rodriguez is hopeful to see rTMS used as a first line of therapy. “I’m hoping that we can take the first step so that [rTMS] is a resource available for the UBC [community].”