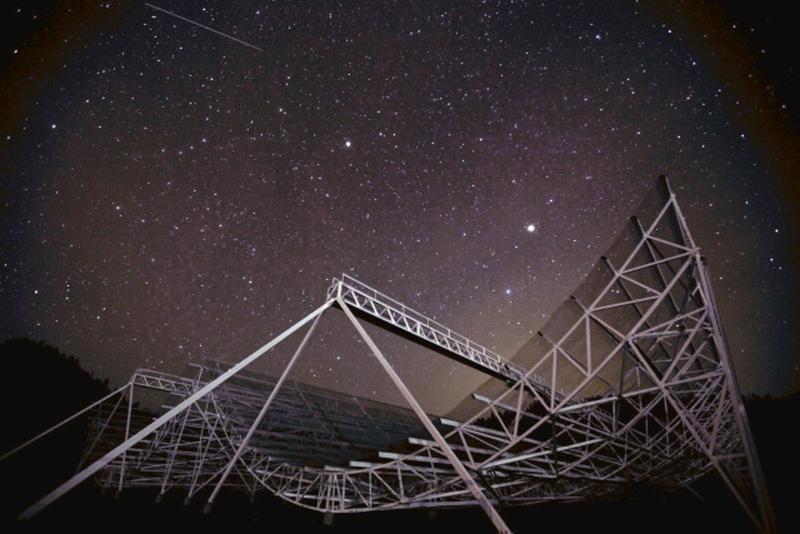 CHIME is a cooperation between University of British Columbia, McGill University, the University of Toronto and the Dominion Radio Astrophysical Observatory. Photo courtesy Keith Vanderlinde

As explored in a newly published paper, Sigurdson and Masui speculate that their method of using “radio bursts” with unknown origins to determine the distance of cosmological bodies (stuff in space) could potentially shed light on a whole host of previously unknown information about our universe.

These tiny energy bursts propagate from very far away happening at all frequencies. The different frequencies travel at different speeds, explains Masui. The amount of delay researchers measure in the arrival times of the frequencies can be expanded to determine the amount of matter that the wavelength has travelled through.

Since our universe contains a lot of matter, this timeline can then be used to figure distance using density.

Although at this point in time, there have only been 10 recorded bursts the first of which was discovered in 2007. Sigurdson and Masui estimate that the there are hundreds or even thousands of these radio signals a day. Once more are discovered, the researchers will be extremely useful in building a large-scale map of the universe.

After Sigurdson and Masui laid out the theoretical groundwork, they turned to their partnership with the Canadian Hydrogen Intensity Mapping Experiment (CHIME), a collaboration of scientists from UBC, McGill and the University of Toronto. CHIME is a radio telescope built out of cylindrical reflectors. The reflectors have radio receivers that measure half the sky everyday. The telescopes primary focus is to measure the distribution of hydrogen in space as it moves away from Earth.

As it moves out of its initial phases, a team of scientists will be focused on the radio bursts as a secondary purpose for the telescope.

“We think CHIME is the perfect instrument to do this sort of thing,” says Masui. “Even if CHIME just found 10,000 of these bursts, we would already learn things about the universe that we didn’t know before.”

“The ultimate goal is to understand the cosmos and mapping it is the first step,” says Sigurdson. “I am super excited about [the project] and I want to convey that excitement to everyone else.”

We can expect to see new frontiers on the research in the next few years with the brilliant minds at UBC leading the way.