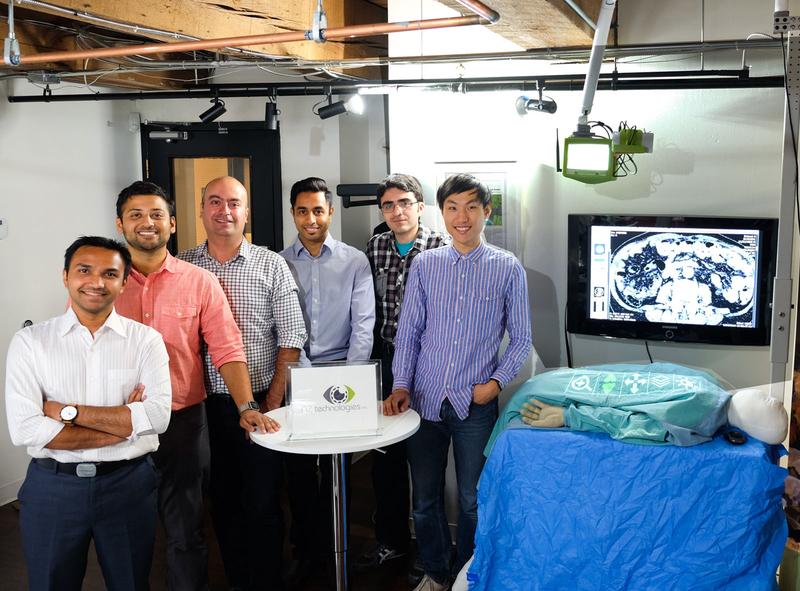 Surgery is old — over 2,000 years old. Now, thanks to technology developed by a UBC alumnus's company, it’s getting a facelift.

NZ Technologies is about to commercialize a technology that allows surgeons to manipulate imaging devices with controls projected onto the patient's bed sheet during procedures.

“I started NZ Technologies as a consulting firm,” Nima Ziraknejad, a UBC engineering alumnus, recalled. “It was pretty much the way that I made a living,” he explained. The company was founded in 2009 during the first year of his PhD.

Fast-forward seven years later and NZ Technologies has developed a very promising device named TIPSO —Touchless Interaction with PACS in Sterile Operations. TIPSO allows radiology interventionists — doctors who use imaging like X-Ray to perform minimally invasive procedures — to interact with a picture archiving and communication system (PACS), which is common to hospitals around the world, over the operating table without having to touch a thing.

Ziraknejad explained that in interventional radiology procedures, “they don’t cut anything. They pass a catheter through the patient’s body and for that, they need image guided technology.”

The concept behind TIPSO was born three years ago after Ziraknejad was introduced to the problem with the usage of PACS by physicians Behrang Homayoon and David Liu at Vancouver General Hospital (VGH).

Homayoon had been Ziraknejad’s classmate during their undergraduate studies in electrical engineering and was beginning his medical internship at VGH under the supervision of Liu. The classmates had kept in touch and thus, the link was made.

“They had a problem and said, ‘Hey, can you solve it for us?’” recalled Ziraknejad.

The reality behind the problem at hand was that while the surgery room is a sterile, the control room — where image manipulation takes place — is not. A significant amount of time and effort is spent scrubbing in and out of the surgery room in order to view and manipulate the images. An increased length of surgery, chance of infection and reduced attention of the surgeon ensues.

During Ziraknejad’s PhD, he developed technology that detects a head position in 3D for use in whiplash injury research, and Liu and Homayoon wanted to know if the technology could be used to track hand movement during surgery. However, he noted that along the way, they learnt that hand gestures weren’t the most intuitive to surgeons

“That was where the whole idea — or the innovative part of the TIPSO — came up which was really that. Let’s project the virtual menu.”

The self-contained device works by projecting a menu on the bed sheet, like a virtual keyboard, and the surgeon passes there hand over an icon to select it.

“There is a zoom command that is sent wirelessly to the PACS server and the system monitor is right in front of the surgeon — they can do those actions in real time,” explained Ziraknejad.

TIPSO is already being used in some hospitals, including Surrey Memorial Hospital, and was unveiled at the Society of Interventional Radiology event in Vancouver this April, drawing the attention of interventionists from around the world. However, the formal commercialization of TIPSO will occur in November at the annual meeting of the Radiological Society of North America in Chicago.

While his time at UBC delivered plenty for him in the classroom, Ziraknejad realized its broader impact. “Doing that PhD was very helpful for me in terms of finding the right resources and basically bringing the right tools into a venture.”