UBC's CERC central to the future of fuel cell research 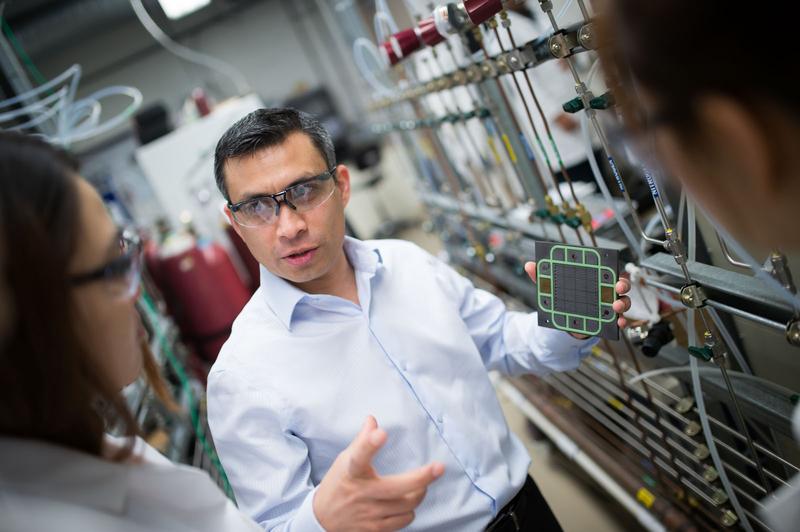 Walter Merida, the director of the CERC, holds a fuel cell. Photo courtesy of Don Erhardt

“We’re really well positioned not just in Canada, but globally, to start attracting significant industrial partnerships,” said Dr. Walter Merida, the director of the Clean Energy Resource Centre (CERC). “We are really at the threshold of a new way of doing things with the energy system. All kinds of new business models and new kinds of ideas are [becoming] possible.”

The fuel cell lab itself is a large hangar room, cramped only because of the sheer amount of equipment in it. Thick wires and hoses hang everywhere among clusters of compressed air tanks, countless pipes, valves, various computers and a row of large, rectangular white research stations. Sitting on the research station platforms at waist height are the fuel cells: sleek, silver and black boxes just under the size of a car battery.

A fuel cell is an electrochemical system that transforms chemical energy into electrical energy. There are many types of fuel cells, but UBC’s research is focused on proton exchange membrane fuel cells (PEMFC) which use hydrogen and oxygen to make electricity and clean water without emissions. Assuming the hydrogen is produced cleanly, it’s often produced with natural gas.

Fuel cells don’t make much energy on their own — the silver boxes in the lab are actually stacks. One fuel cell stack can have hundreds of individual fuel cells inside. Each cell sandwiches a membrane electrode assembly (MEA) between two separating plates. Inside the MEA is the fuel cell’s namesake: the proton exchange membrane. The membrane is also sandwiched, but instead of plates, it’s between hydrogen and oxygen electrode layers as well as a gas diffusion layer.

Hydrogen is pumped in and first hits the hydrogen electrode layer. An electron is stolen and whisked off in an external electrical circuit while a hydrogen ion makes it through. Platinum is used as a catalyst for that reaction. Those stolen electrons create the needed electrical current while the hydrogen ions pass through an electrolytic membrane and bond with oxygen ions sucked in from the air. The hydrogen and oxygen creates water as a clean byproduct, which exits as vapor. In a car, for example, the external circuit would then feed into an electric engine.

Automobile manufacturers want PEMFCs, so that industry drives a lot of research. In cars, fuel cells take just a few minutes to refuel and they’ll run for 400 to 500 km – same as your average fossil fuel car. PEMFCs are much lighter than combustion engines too — even Apple recently applied for a fuel cell patent for mobile applications.

There’s nothing new about the technology. NASA began using fuel cells decades ago for electricity and drinking water aboard spacecraft. One of the biggest barriers to adopting the technology has been cost — the average person’s pockets aren’t as deep as NASA’s and burning petroleum in fossil fuel vehicles is still much cheaper per kilowatt than fuel cells.

Reducing cost is a big part of what UBC’s team is working on. To that end, CERC is studying the different components of fuel cells and their performance as well as trying to reduce the amount of precious metals used and their failure response and prevention. The platinum used as a catalyst, for example, is extremely expensive. 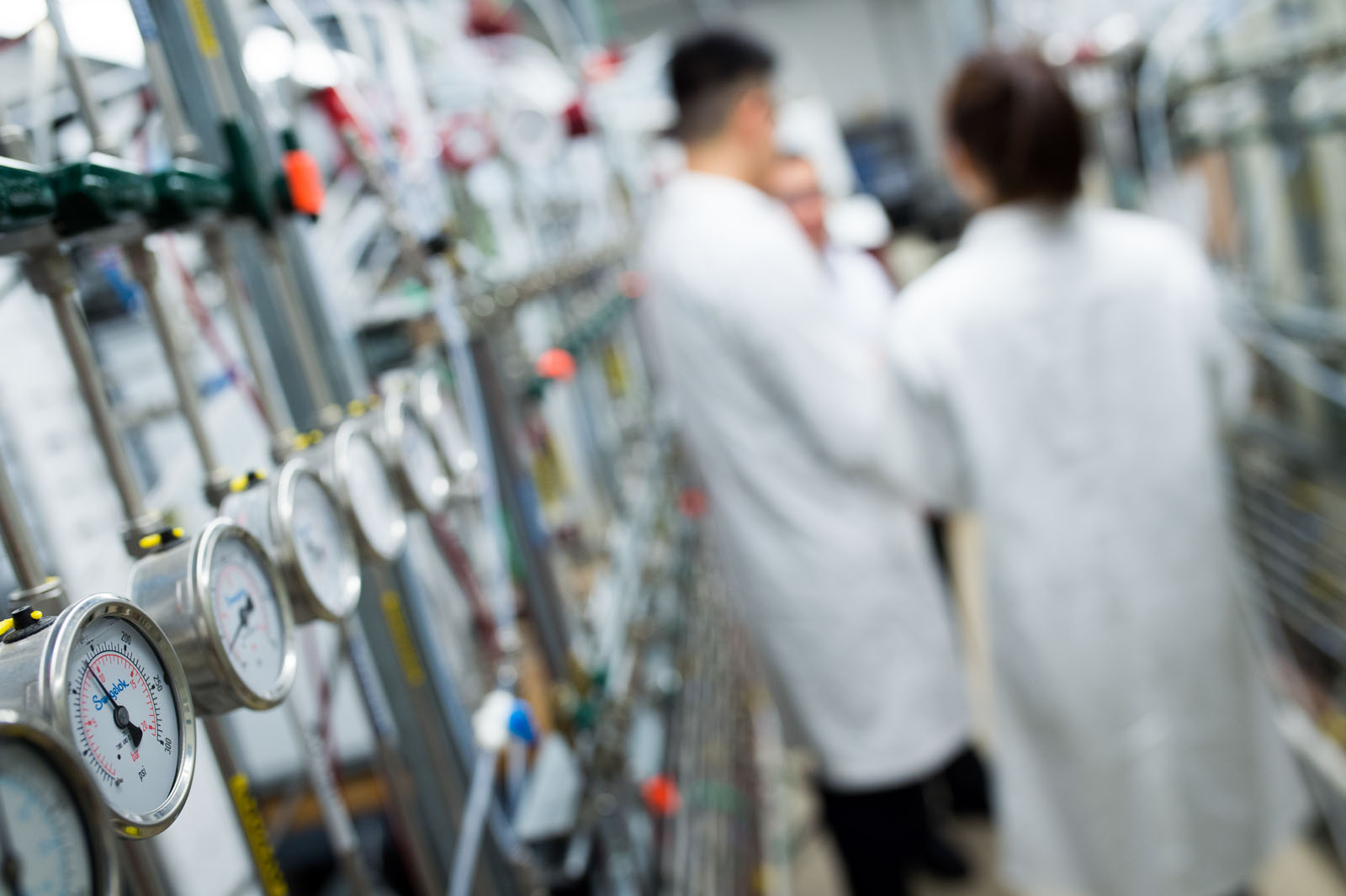 The sleek silver boxes look cool, but because those complicated reactions happen inside of them, it’s challenging to study what’s happening.

“The whole idea is to have us look deeper into what the fuel cells do,” said Omar Herrera, a project coordinator at CERC. “In a combustion engine, you can actually see things happen. So as researchers, we have to think about how to even look at what’s happening inside … It’s a bit of a black box — it’s tricky.”

Herrera says they’ve gone so far as to rig small systems with windows throughout the cells so they can see deeper. It’s exciting because, as a result of the difficulties in researching it, everything’s new ground and there’s always area of research to progress.

CERC also does applied science research. UBC’s team is able to work across the whole spectrum of fuel cell research because the team at CERC is cross-disciplinary. Eight faculty members work at the centre and it is supporting 25 master’s students this year. The centre has supported 117 alumni since the centre began in 2000 and officially opened in 2006.

On the applied sciences side, CERC’s engineers are looking at how industry can scale up manufacturing efficiently.

“When these new technologies come onto the market, the big challenge is going from making a few of them to making thousands,” said Merida, noting they’re working with industry partners to accomplish that.

CERC partners with the B.C. Automotive Fuel Cell Cooperation (AFCC) who represents Daimler (who overs Mercedes-Benz) and Ford. Mercedes-Benz hopes to have its fuel cell cars rolled out in a few years equipped with UBC technology.

The automotive application is a big part of UBC’s research, but Merida is most excited for alternative applications. He notes fuel cells are a bridge for the storage of renewable electricity. One problem with solar and wind energy is that there is no way to store that electricity. When the sun’s not out or the wind’s not blowing, electricity’s not running.

But now, the excess electricity can be turned into hydrogen that can be stored and used directly, or mixed with other gases to lower their carbon content. An initiative called Power2Gas is already doing this in Germany and Scandinavia.

CERC has more than just automotive partnerships. Over the last three years, Merida’s team has had the most significant collaboration with the Fraunhofer Society in Germany — the largest applied research entity in Europe — as well as the Max Planck Society in Germany. CERC signed an agreement last year with the Korea Gas Corporation, but Merida says it’s still being developed and their main focus is on close-to-home partnerships.

“What’s needed now is for us to transfer some of these research results to industry that’s right here in Vancouver ... UBC and, more generally, B.C. is really the cradle of fuel cell technology.”

Merida teased that CERC is about to establish two more major corporate partnerships, but they are yet to be finalized.

B.C. is second in the world for fuel cell research, surpassed only recently by Japan. Major partnerships close to home are viable because of B.C.’s reputation. This reputation is what attracted Mercedes-Benz in 2012 to build its first fuel cell manufacturing plant in Burnaby.

The Government of B.C. reports that industry here has invested over $100 million per year in hydrogen research since 2003. The UBC Faculty of Applied Science and their industry partners are core funders of the projects with some also receiving matching government funds.