Creating the universal blood type: Key enzymes may be ‘inside ourselves’ 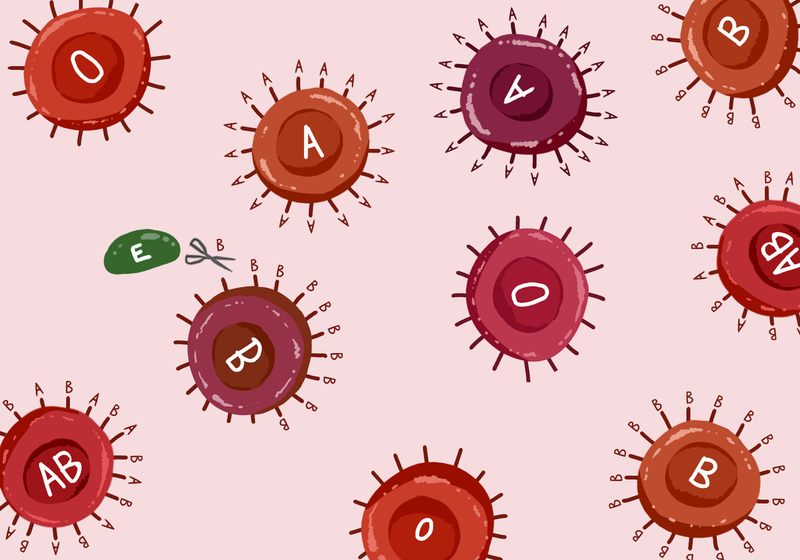 Those of us with one of three blood types — A, B and AB — have antigens at the surface of our red blood cells, which Withers hopes to cut off with an enzyme, making a blood type similar to type O blood. Kristine Ho

Researchers at UBC are working to make blood donatable to all individuals, combatting blood donation problems that have long plagued transfusions.

“What we’re trying to do … is use the skills that we have in understanding sugar chemistry, [or] carbohydrate chemistry, and understanding enzymes — which are the catalysts that carry out various reactions including cutting sugars off of things — [and] trying to bring those two together to potentially solve a problem in blood transfusion,” said Dr. Stephen Withers, a biochemistry researcher working with other researchers and the UBC Centre for Blood Research on the problem.

Their research is funded by the Canadian Institutes of Health Research.

The only thing differentiating someone with A-type or B-type blood from O-type blood is the presence of their respective A or B antigens. When your body detects foreign antigens in your system, it marks them as an invading threat and triggers immune responses to attack them.

This explains why A-type blood, which has A antigens, cannot be transfused into a person with B-type blood, as the recipient’s body would recognize the A-type blood as foreign and attack it. O-type blood, by contrast, lacks additional antigens and can be donated to all four blood types, earning its nickname of the “universal” blood type.

We can potentially use enzymes, which are chemical tools that can cut sugars, to turn other types of blood into O-type blood, Withers explained. The O-type blood could then be donated universally, easing pressures on blood shortages and broadening the blood supply.

“What we need to look for [are] enzymes that are capable of cutting off those A and B-type sugars… and to do so very quickly and very efficiently,” he said.

Several years ago, Withers and then-UBC researcher Dr. David Kwan used enzymes to cut the antigens off of A and B-type blood, making it similar to O-type blood. Other researchers had previously proposed this idea, but in their study the UBC researchers attempted to increase the effectiveness and speed of the enzyme to maximize cost efficiency.

By reading previous studies on the subject, the team first identified an enzyme that possessed the capabilities required to cut antigens. They then tried to increase its effectiveness through directed evolution, a process that involves modifying parts of DNA called genes. Genes are the specific instructions that are used to create enzymes, similar to how recipes are instructions for making food.

Just like how modifying a recipe will create different kinds of food, modifying genes in DNA will result in enzymes with different properties, such as increased effectiveness or increased speed.

The researchers created millions of modified gene copies that differed from one another very slightly, then used bacteria to read the instructions specified by the altered genes, thus producing many different enzymes. They then screened all the enzymes to try and find one that was more efficient at cutting off antigens than all the others.

Once that improved enzyme had been identified, they repeated the process again, improving the enzyme’s function through successive rounds of directed evolution. After five rounds, the final modified enzyme was 170 times more effective than the original.

A gut feeling for a possible solution

Withers — working with Dr. Steven Hallam of UBC’s Microbiology Department and Dr. Jayachandran Kizhakkedathu — is now searching for an enzyme that is naturally better at cutting off sugars than the one studied previously. Where they have directed their search is inside our bodies — more specifically, inside our guts. 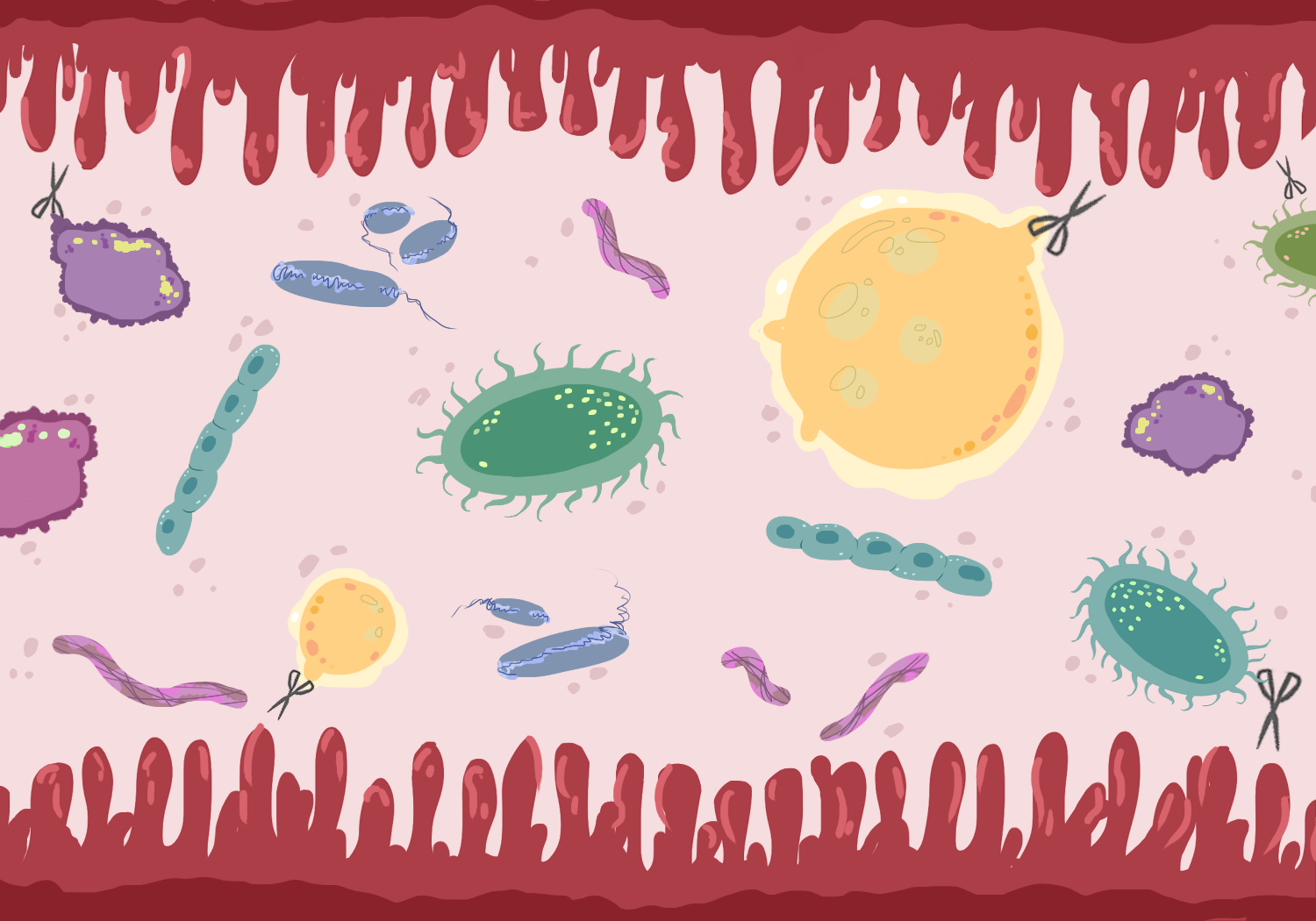 More efficient “molecular scissors” — enzymes — for cutting off antigens may be found inside our gut. Kristine Ho

Withers explained that the exact same sugars that line the surfaces of our red blood cells also line the walls of our gut.

“An interesting fact is that the bacteria in our gut have lived synergistically with us … The bacteria can provide some benefit to us by doing some digestion for us but in return they eat a little bit of us all the time. And in particular, some of them are chopping those sugars off the interior of our gut, right where we synthesize them,” he said.

What this means to the researchers is that the bacteria with enzymes that naturally cut those sugars in our gut may be adept at naturally cutting off the same sugars on our red blood cells.

“There’s an interesting sort of circularity,” Withers said. “You’re sort of looking inside ourselves to find enzymes … not quite to cure ourselves but to improve benefits.”

To look for those enzymes, the researchers have extracted DNA from the bacteria in human feces, the byproduct of human gut contents, to investigate whether any of the genes within the bacteria are producing enzymes of interest. So far they have found enzymes that are considerably more effective than enzymes used before and are currently testing them on patient blood samples.

They have found one or two potential enzymes to use and are trying to build up data on a variety of different blood samples from different patients. Once that data is consolidated, they may start speaking with clinicians, who will advise on how to proceed to the next stages, or improve the enzyme further through directed evolution. Withers explained that the process must undergo rigorous safety tests and surveillance before being implemented in clinics.

“If it passes those tests, and can go on and be used in the clinics safely, then it would seem it would be a very useful … as a way of broadening the blood supply and stabilizing, in effect, the blood supply, at least [for] the AB antigens,” said Withers.