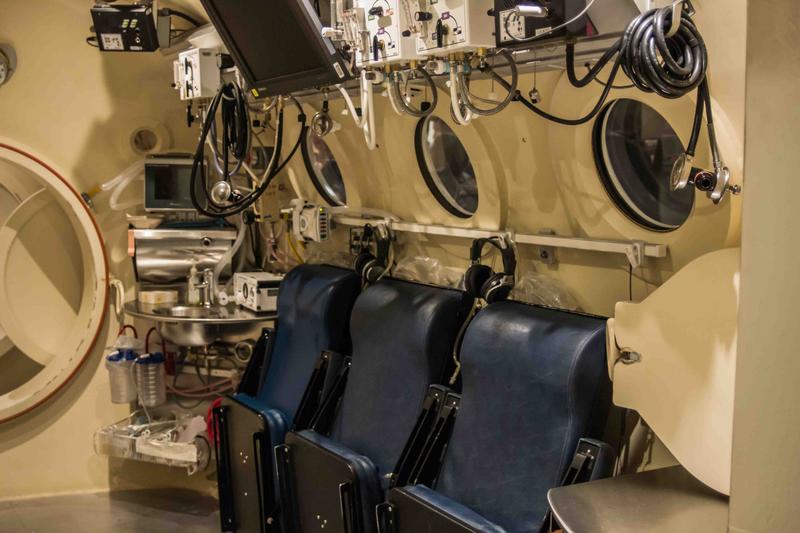 That's how Dr. David Harrison explained what happens to the human body when you go scuba diving.

Harrison is the medical manager of the Hyperbaric Unit at Vancouver General Hospital (VGH) — not a place you normally want to be. The Ubyssey tagged along with the UBC Aqua Society on their recent visit to the chamber to take a tour and talk about scuba safety.

The hyperbaric chamber stimulates the pressures and gas levels experienced by scuba divers. The giant metal container delivers varying levels of oxygen to patients via see-through plastic hoods. The chamber can also pump air into itself to simulate pressures similar to those experienced by divers who reach depths of 200 feet (over 60 metres) below sea level. For those non-diver readers, that's known as really damn deep.

“Oxygen is really what I do,” said Harrison.

As a hyperbaric doctor, Harrison has one drug — oxygen — to treat over a dozen diseases. The chamber's meat and potatoes is treating diving-related injuries, but oxygen is a remarkably versatile drug. The chamber at VGH treats carbon monoxide poisoning, gas embolisms, gas gangrene, crush injury and traumas, anemia brain abscesses (they are like giant brain pimples inside your skull), flesh-eating disease, chronic bone infection (osteomyelitis), radiation injuries like the side effects of cancer treatment, burns, frostbite and diabetic non-healing ulcers. 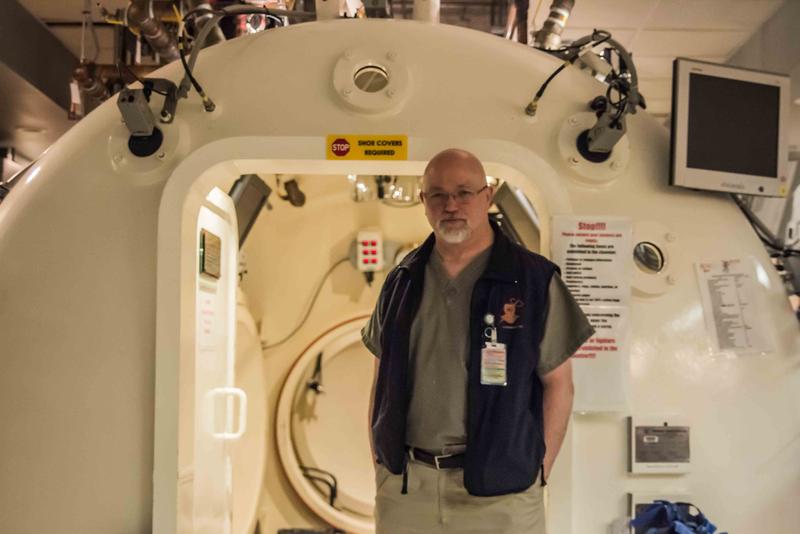 Unlike a whale or a dolphin, the human body isn't built for the pressure exerted by hundreds of feet of salt water. This pressure increases your blood pressure, and reduces your heart rate and heart output. Carbon dioxide (which isn't all that good for you) can accumulate in your body because the pressure of the ocean prevents it from leaving. The pressure also dissolves nitrogen in your blood. This can lead to nitrogen narcosis where you basically you get high off of nitrogen.

This pressure, and the gas it dissolves in you, can be very dangerous, leading to what divers call “the bends.” When a diver returns to the surface and the nice, comfortable pressure of one atmosphere (and no sea water) this dissolved gas wants to escape. Imagine shaking up a can of coke and then opening it — it will explode everywhere. The same thing happens to divers — they are the can of coke. Divers won't explode quite as dramatically, but the bends can be deadly.

“You don't have to be stupid to die scuba diving, but it does help,” said Harrison.

Scuba diving may not seem as dangerous as a sport like skiing or rock climbing, but over the course of a diver's lifetime, the risk builds up. Divers die at a rate of about 5 per 100,000 dives. Each time a diver dives, the risk adds up. This means over the course of a lifetime of diving, the average diver can see their risk of dying creep up.

“Don't be an average diver,” said Harrison. “Be an extraordinary diver.”

Harrison, the hyperbaric diver, encouraged divers to call the hospital or the hyperbaric unit if they have any questions or think they have the bends. He'd rather get a call from a concerned diver at 4 p.m. than a page at 11 p.m. telling him someone needs treatment for the bends now.

“It was a great recap of preventative measure to prevent decompression sickness,” said Jens Vent-Schmidt, the vice president of the Aqua Society and a PhD student at UBC. Vent-Schmidt, who has been diving on and off since 2009, has since become a dive master through the Aqua Society. “It's great for beginner divers and experienced divers.”

Vent-Schmidt encouraged interested students to come by the Aqua Society to test out scuba diving or get the half-off discount the club offers a few times a year for beginner diving courses. The club also takes diving trips around the world, and have club space on the third floor of the Nest.

A previous version of this article states the risk of any single dive is about 0.05 percent. The Ubyssey regrets this error.